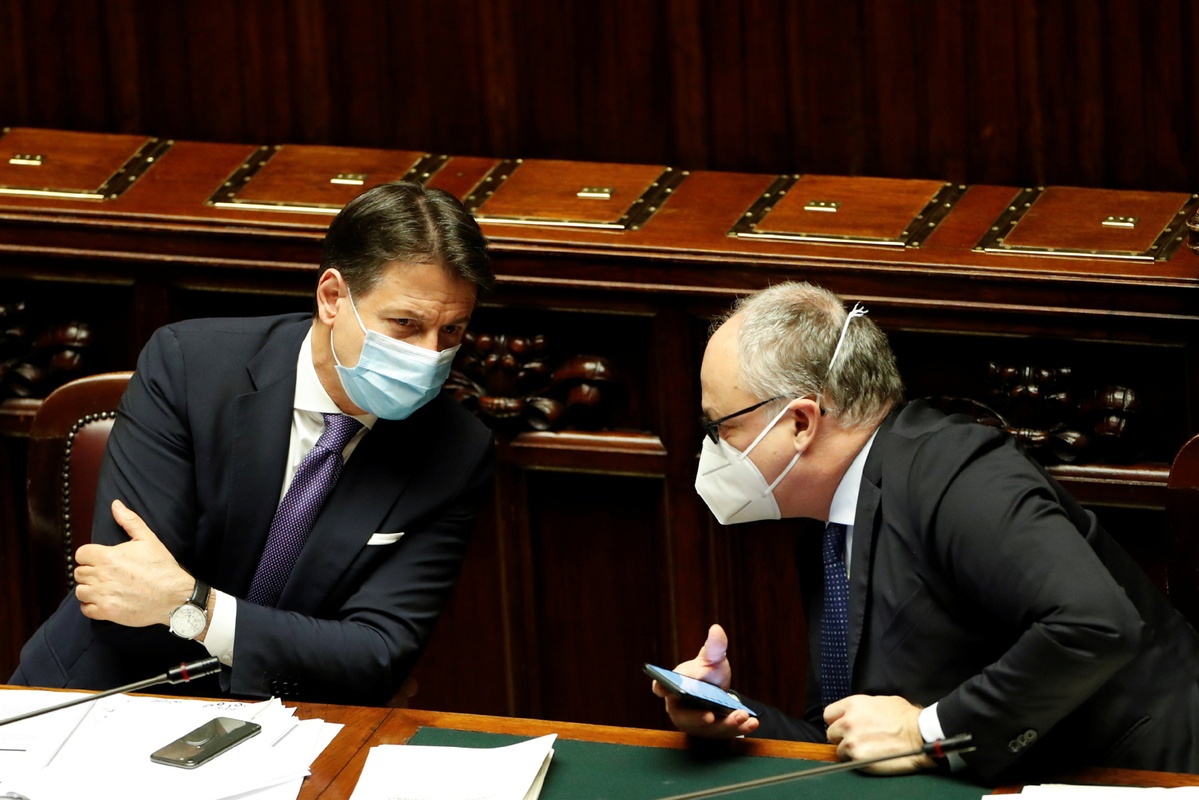 Italian Prime Minister Giuseppe Conte chats with Economy Minister Roberto Gualtieri as he addresses members of the lower house of parliament during a session on the coronavirus disease (COVID-19) situation, in Rome, Italy Nov 2, 2020. [Photo/Agencies]

ROME - Italian Prime Minister Giuseppe Conte on Monday announced stricter measures to contain the spread of the novel coronavirus, as 22,253 new infections were reported, bringing the tally to 731,588 in the country.

According to latest data published by the Ministry of Health, of the 396,512 people currently positive of the coronavirus, 374,650 are quarantined at home with light or no symptoms, 19,840 are hospitalised and 2,022 are in intensive care units (ICUs).

Addressing parliament on Monday, Conte said "unfortunately over the past few weeks the resurgence of the pandemic has led to a significant multiplication of infections" and this is why his government is about to issue a new decree with more restrictions.

The new decree is expected to be released late Monday night and its measures will be effective immediately for about a month, according to local media reports.

Conte said that under the new decree, high school and university students will have to go back to online learning, galleries and museums will close, passengers on public transportation will be reduced to 50 percent of capacity, and shopping centers will have to shut down during holidays to reduce crowding.

He also said that unnecessary travel to and from high-risk regions will be banned, and people will not be allowed to go out at night except in cases of necessity. Conte did not specify the curfew hours.

Conte told lawmakers on Monday that the government's new decree would place Italy's 20 regions into three risk levels, with each higher level entailing stricter containment measures: regions under type 4 scenario will have the strictest measures, those under type 3 scenario will have intermediate restrictions, and regions with the lowest levels of risk (types 1 and 2) will have the most relaxed restrictions.

Conte said the latest weekly monitoring report from the National Institute of Health (ISS), "has forced us to envisage" the measures "in order to put the nation out of danger".

"The overall situation is confirmed to be critical," the ISS report said, adding that 11 out of Italy's 20 regions are "to be considered at high risk of uncontrolled transmission of SARS-CoV-2".

The ISS report also "confirms that a drastic reduction of physical interaction between people is necessary in order to ease the pressure on health services".

"It is fundamental that the population avoid all occasions of contact with people outside the home unless strictly necessary, and it is also fundamental to stay home as much as possible," the ISS report stated.

"The evolution of the pandemic is very worrisome ... and transitioning to a type 4 scenario," Conte said.

The prime minister emphasised that the current situation is different from the first wave of the pandemic last spring, "when we were invaded by an unknown and invisible enemy and we were forced to protect ourselves within our homes".

Now, he said, the country is "self-sufficient" in terms of equipment and supplies to fight the virus.

For example, Italy had 5,179 intensive care units (ICUs) at the beginning of pandemic and has since procured equipment to bring the total number of ICUs to 10,841, Conte said.

The emergency right now does not concern the number of available ICUs, but rather "a growing and worrisome crowding in hospitals and sub-intensive care units", Conte added.

"Today as last spring, the priority is defending human life and health, which is a precondition to enjoy all other constitutionally guaranteed rights," he said.

"We're aware of the frustration, the sense of loss, fatigue and also rage of citizens," Conte went on. "We are conscious of the profound repercussions these measures will have inevitably on economic activity, production and people's incomes."

"But there can be no dilemma between protecting individual and collective health and defending our economy," he noted. "The more effective we are in bending the curve of contagion, the faster we can loosen restrictions."

The government is committed to guaranteeing economic protection to workers, businesses and families "for as long as it takes", Conte reassured.

The latest developments here came amid a global effort to develop a vaccine against the new coronavirus, which involves countries including Italy, France, Britain, China, Russia and the United States.