WORLD Italy begins to grapple with how to ease virus restrictions

Italy begins to grapple with how to ease virus restrictions 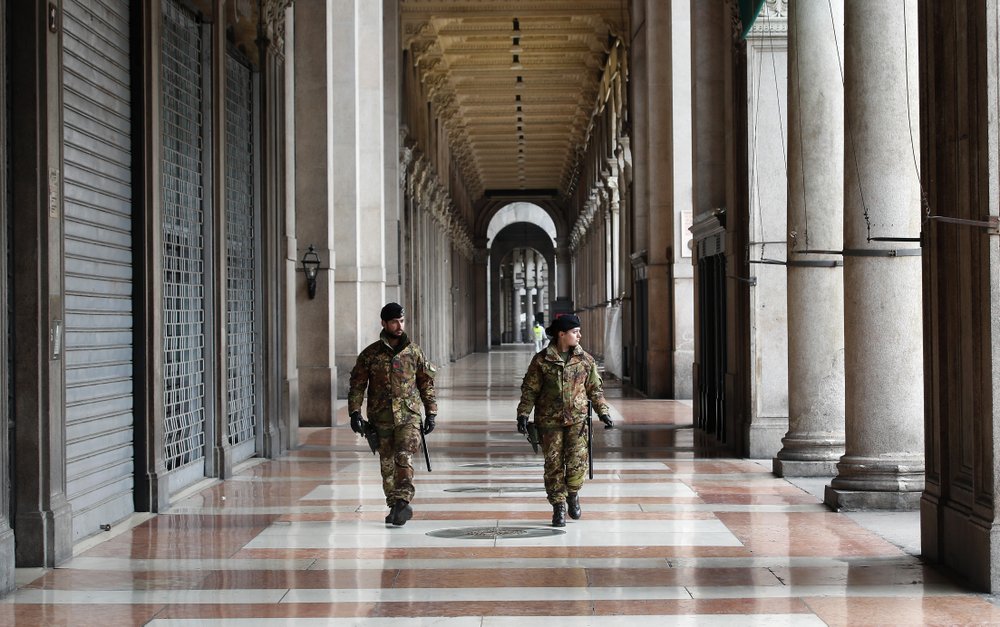 In this March 22, 2020 file photo, Italian soldiers patrol by closed shops due to lockdown measure to prevent the spread of COVID-19, in Milan, Italy. (Photo: AP)

With warmer weather beckoning, Italians are straining against a strict lockdown to halt the coronavirus that is just now showing signs of ebbing at the end of five weeks of mass isolation.

Italy was the first Western democracy to be hit by the virus, and it has been leading the official global death toll with 19,468 victims through Saturday. Now it is likely to set an example of how to lift broad restrictions that have imposed the harshest peacetime limits on personal freedom and shut down all nonessential industry.

Right now, schools are closed and children are not permitted to play in parks. Walks outdoors are limited to a distance of 200 meters (less than a quarter-mile) and any excursion not strictly a matter of necessity risks hefty fines.

The official line is patience with measures that have shown success in slowing the virus spread until there is a clear decline in the number of new cases. Still, officials have begun grappling with the question of how to manage social distancing on mass transit, re-open ordinary commerce and relaunch manufacturing without risking another peak.

The so-called Phase II is being described as a cautious reopening, as society continues to live alongside the virus until a vaccine can be developed, perhaps in 12 to 18 months.

“We obviously don’t want to delude ourselves that everything will change,” Premier Giuseppe Conte told Italians this week.

On Friday, Conte extended the nationwide lockdown through May 3. That includes all nonessential industry, after which, “I hope we can start again with caution and gradually — but restart,” he said.

For most people, the coronavirus causes mild or moderate symptoms, such as fever and cough. But for others, especially older adults and people with health problems, it can cause severe symptoms like pneumonia.

A technical committee advising the government is working to expand testing for COVID-19, the disease caused by the virus. to get a better picture of how widespread it is in Italy before measures can be eased. Preparations are also underway to launch a mobile app that will allow people to know if they have been near anyone who is positive, something that is expected to take at least a month.

“With this, you can allow people to have more freedom of movement,” said Walter Ricciardi, a public health expert and member of the World Health Organization board who is advising the Italian government.

The technology for the app already exists, but authorities were working on technical details on how to deploy it.

Experts in Italy are coordinating with their European partners so the tracking can be applied across borders, which have been de facto closed by the virus. The goal is to establish a common technology, which could help in re-establishing freedom of movement among EU nations.

Using the app would be voluntary for anyone wanting to know whether they have come into contact with an infected person that they would have no other way of identifying. Any contacts would be tested, and if positive treated, according to the WHO initiative: trace, test and treat.

Advocates insist that anonymity would be protected and that no personal data would be at risk, likening the app to other widely used applications like Google Maps or TripAdvisor, which help users identify specific data.

Italy’s hardest-hit regions in the north are also floating proposals for immunity certificates based on antibody blood tests, which haven’t yet proved reliable. Virus experts caution that such documents are a long way off.

“The blood test only tells us if the person has been in contact with the virus,” not if the subject is actually immune, said Andrea Crisanti, an expert at the University of Padova who is helping to coordinate the coronavirus response in the northeastern region of Veneto. Significantly, he said, the tests also don’t show whether antibodies are active, their quantity or how long they might last.

“On a social level, the blood test would allow us to understand to what extent the virus has spread in various sectors of the population and geographical areas, where we could then test to see if the virus is active,” Crisanti said. “We are a very long way from immunity passports.”

Some regions already require facial masks, though not necessarily surgical-grade ones, which remain in short supply. Lombardy, which has borne the brunt of the epidemic, has made masks mandatory for anyone venturing outside their home — but because of the continuing shortage, scarves can be used. Veneto has distributed a basic mask to most households, requiring them to be used in supermarkets and on public transportation.

The mayor of Milan, Europe’s first major metropolis to close because of the virus, is telling citizens that any re-opening could be “stop-and-go,” and is discussing strategies with other European mayors.

Giuseppe Sala said Milan officials are studying how to guarantee social distancing when more people begin to access public spaces, from public transportation to cinemas. Sala is considering having younger city employees return to work first since they have generally proven less susceptible to the virus. Remote working, where possible, will continue to be encouraged.

“Until we have a vaccine, it will be an anomalous situation,” Sala said.

Public health officials warn that the easing phase could prove to be the most dangerous.

“The fact of pandemics is that they move in waves, and normally the second wave is more dangerous than the first because the guard has been lowered, you think you can return to normal and a heavier blow arrives,” said Ricciardi, Italy’s liaison to the WHO. “We need to be careful and not make vain all of the sacrifices that have already been made.”

The good news is that Italians’ beloved summer holidays don’t appear to be ruled out.

“It will be a summer during which we will have to maintain social distance, avoid gatherings and limit movements. There will not be a lot of facilities to travel by airplane or train, where it is difficult to maintain a secure distance,” Ricciardi said.

“We need to think of making vacation plans that are more prudent.”