Italy doubles down on anti-migrant stance ahead of EU summit 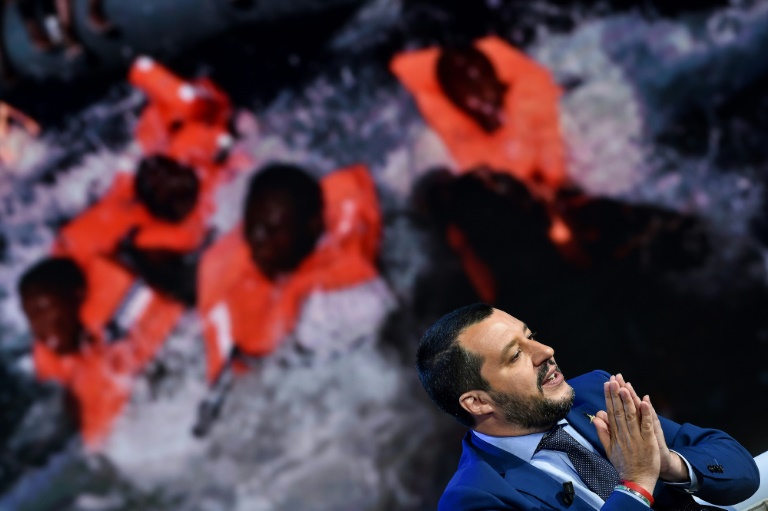 Italy doubled down Friday on its new tough stance against migrants, insisting it could not take "one more" refugee and warning the migration crisis could put the bloc's survival at stake.

Just two days before a mini summit on the issue in Brussels, Italy's three-week-old populist government is digging its heels in on campaign promises to stop the influx of migrants, threatening to seize rescue ships or barring them from its ports.

"We cannot take in one more person," hardline Interior Minister Matteo Salvini told the German weekly Der Spiegel. "On the contrary: we want to send away a few."

Just two days before the informal talks -- called by Berlin and being attended by some 16 EU leaders -- Salvini, who is also Italy's deputy prime minister, warned that nothing less than the EU's future survival was at stake.

"Within a year it will be decided whether there will still be a united Europe or not," Salvini told Der Spiegel.

Upcoming EU budget talks, as well as European Parliament elections in 2019 would each act as a litmus test for "whether the whole thing has become meaningless", he said.

Sunday's talks are supposed to prepare for a full summit next week, where all 28 EU leaders will discuss plans to overhaul the bloc's asylum system, which has been under severe pressure since the migration crisis exploded in 2015.

Nevertheless, German Chancellor Angela Merkel -- who is facing a ferocious political backlash for letting in well over a million asylum seekers into Europe's biggest economy -- played down expectations that a solution could be found quickly.

Speaking on a visit to Lebanon, Merkel said that "we know that no solution will be reached on Thursday and Friday at the level of the 28 member states... on the overall issue of migration".

Instead, she said, "bilateral, trilateral and multilateral" deals must be reached to tackle the issue.

The far-right Salvini, who heads the anti-immigration League party, has come to personify Rome's new confrontational and unbending stance.

It was he who barred the French NGO-run Aquarius rescue ship, carrying some 630 migrants, from docking in Italy, triggering an EU-wide row.

On Thursday, he turned his sights to the German NGO, Mission Lifeline.

"The illegal boat Lifeline is now in Maltese waters with its cargo of 239 migrants. For the safety of its crew and the passengers, we've asked Malta to open its ports," Salvini wrote on Twitter.

"Clearly, the boat should immediately be impounded and its crew arrested," he added.

A source close to the Maltese government said that Valetta had not yet received any official request from Rome, nor had Lifeline itself sought any permission to land.

'Open the Maltese and French ports!'

"Italian ports are no longer at the disposal of traffickers. Open the Maltese ports! Open the French ports," Salvini said in Sienna, where a second round of local elections was being held on Sunday.

Salvini's uncompromising line found an echo Friday when Czech Prime Minister Andrej Babis said he was also ready to start turning away migrants if Berlin and Vienna did so, as Germany's interior minister proposed earlier this week.

German Interior Minister Horst Seehofer warned on Monday that he would give Merkel a fortnight to find a European deal to curb new arrivals by the June 28-29 EU summit, failing which he vowed to order border police to turn back migrants.

Rome had briefly weighed boycotting Sunday's mini-summit, but finally agreed to attend after reassurances from Merkel.

Italy had been riled because a leaked draft statement focused more on the redistribution of the migrants once they had arrived in Europe, rather than on securing Europe's borders.

But the government was placated after Merkel told them the text had been shelved.

Nevertheless, tensions continue to simmer very close to the surface, and tempers can flare up very quickly.

"One day, he's saying that he doesn't want to offend Italy, and then the next, he's talking about leprosy," said Italy's other deputy prime minister and head of the populist M5S party, Luigi Di Maio.

"We may be leper populists. But I take the lessons from those who open their own ports. Welcome thousands of migrants and then we can talk," said Salvini.