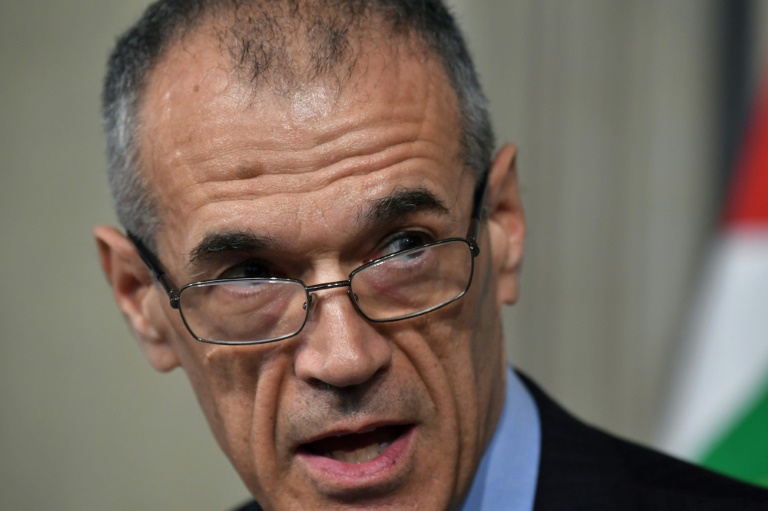 Italy's caretaker prime minister worked to assemble a cabinet on Tuesday to save the country from political turmoil in the face of resistance from far-right and anti-establishment parties.

Financial markets plunged into a frenzy as Carlo Cottarelli was left in charge after efforts to end months of political deadlock hit their latest setback.

President Sergio Mattarella on Monday blocked a cabinet proposed by the anti-immigrant League and their allies in the Five Star Movement (M5S).

That left Cottarelli, a former IMF economist known as "Mr Scissors", tasked with naming a technocrat government. He was expected to present his cabinet to Mattarella within hours.

Five Star and the League, who hold a majority in both houses of parliament, have vowed to reject Cottarelli's proposed technocrat government.

New elections could be held as early as September as the most likely outcome of the political saga sparked by an inconclusive poll in March.

The euro also fell in Asian trade on Tuesday and was in danger of falling below the $1.16 level last breached in early November.

Mattarella's veto and subsequent nomination of Cottarelli as caretaker prime minister sparked angry calls for the president's impeachment, since most lawmakers backed Savona.

Mattarella said that an openly eurosceptic economy minister was counter to the parties' joint promise to simply "change Europe for the better from an Italian point of view".

Savona has called the euro a "German cage" and said that Italy needs a plan to leave the single currency "if necessary".

League leader Matteo Salvini, a fellow eurosceptic who was Savona's biggest advocate, said his side's joint plan for a government failed because of pressure from the "powers-that-be, the markets, Berlin and Paris".

"This isn't democracy, this isn't respect for the popular vote. It's the latest slap in the face," Salvini said, from those that say "Italy should be a slave, scared and precarious".

Five Star chief Luigi Di Maio called on party supporters to attend a rally in Rome on Saturday, the anniversary of Italy's transformation into a republic in 1946, after what he called "Italian democracy's darkest night".

Cottarelli, 64, was director of the International Monetary Fund's fiscal affairs department from 2008 to 2013 and became known as "Mr Scissors" for his public spending cuts in Italy.

He said that should his technocrat government win parliamentary approval, it would stay in place until elections at the "start of 2019".

But if parliament fails to approve his government, a new election would be held "after August" -- the most likely outcome given the populists' strength in parliament. Only the centre-left Democratic Party has announced that it would vote in favour.

"Paolo Savona would not have taken us out of the euro. It's a lie invented by Mattarella's advisors," Di Maio said in a live video on Facebook. "The truth is that they don't want us in government."

Under the Italian constitution, the president nominates both the prime minister and, following proposals from the premier, the cabinet.

The most famous example of a president denying a PM's choice was in 1994 when Eugenio Scalfari refused then prime minister Silvio Berlusconi's choice of his own lawyer -- Cesare Previti -- as justice minister.

However, Di Maio said that Mattarella, a former constitutional court judge, had "gone beyond his legal prerogatives".

He said an impeachment trial for Mattarella, 76, would be "almost a certainty".

Most analysts however say such calls have little chance of success as impeachment is only possible in cases of "high treason" or constitutional breaches.