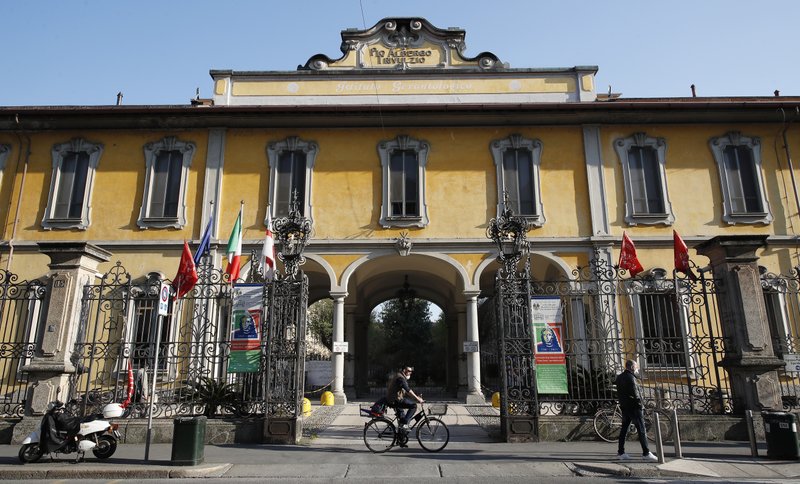 In this Tuesday, April 7, 2020 file photo, a view of the Pio Albergo Trivulzio nursing home, in Milan, Italy. Italy’s biggest nursing home is defending the measures it took to protect residents and staff from the coronavirus amid a criminal investigation and family outrage over 300 deaths from January-April. (Photo: AP)

Italy’s biggest nursing home defended the measures it took to protect residents and staff from the coronavirus Wednesday amid a criminal investigation and family outrage over 300 deaths from January to April.

Officials representing the Pio Albergo Trivulzio home in Milan denied claims from staff that management told them not to wear masks for fear of spooking residents. They said they followed guidelines at the time requiring masks only for symptomatic patients.

The Trivulzio is just one of many nursing homes under investigation for the hundreds of dead during Italy’s outbreak, which overwhelmed the health care system in the north. But its size and history have made it a target of the Italian media and turned it into a symbol of the horrific toll the virus has had on residents of eldercare facilities.

The Trivulzio’s scientific consultant, Dr. Fabrizio Pregliasco, provided the first comprehensive response to the scandal during an online news conference in which he disclosed that 300 residents had died in the first four months of the year.

But he said the 61% increase in deaths compared to the previous five-year average was “sadly, painfully” in line with the trend in Milan itself. He said that by some estimates nursing home dead in Europe account for some 40% of all COVID-19 victims.

Of the 900 residents currently in the facility, 34% are positive. Pregliasco said 8.6% of staff is currently positive and 11% appear to have developed antibodies based on blood tests.

Attorney Vinicio Nardo said the facility, like other nursing homes, was “left outside the priority flow” of protective equipment by the government which instead prioritized outfitting hospital personnel. He questioned whether prosecutors will be able to ascertain a causal link between the deaths and the home’s management given the many uncertainties of when and how the virus first entered the facility. He noted that Trivulzio only obtained test kits April 16.

“I believe the institute will be able to demonstrate that it took all risk-prevention measures necessary,” he said.

Relatives of some of the Trivulzio residents have formed a committee that is gathering evidence for prosecutors and demanding the government appoint a commissioner to run the facility while the criminal investigation proceeds.

Pregliasco and Nardo were asked about the effects of two regional government decrees on patient infections, including one March 8 that designated nursing homes as places where hospital patients could recover to free up COVID-19 beds. Trivulzio accepted 17 such patients, all were declared virus-free by the hospital that sent them and were monitored in isolation once they arrived, Pregliasco said. Seven later died.

Another regional decree March 30 told nursing home directors to not send residents over age 75 to hospitals if they had other health problems. Pregliasco said the facility sent a total of 44 residents to the hospital from February to April, and said some were admitted and some were sent back.

“None of the positives came back,” he said.