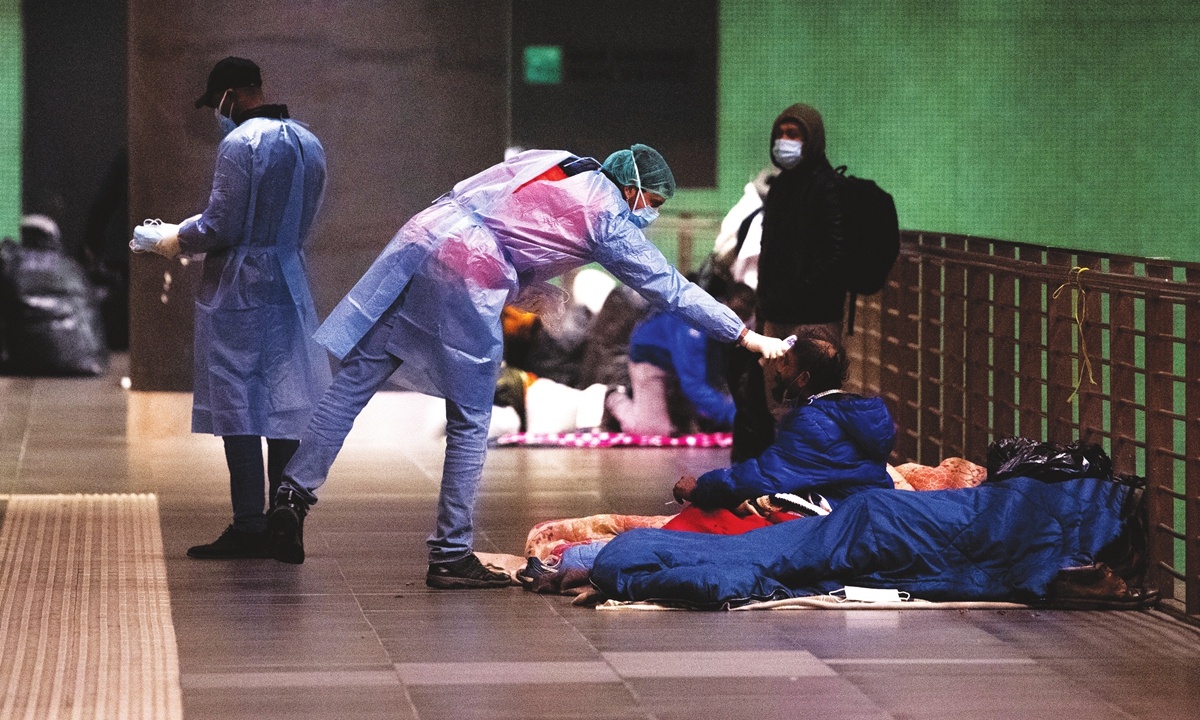 A doctor (center) from Doctors for Human Rights performs a temperature scanning on a homeless man at the Tiburtina train station in Rome, Italy on Wednesday. Photo: AFP

There is a series of evidence on coronavirus being found in Italy before December 2019, including the latest regarding a 4-year-old boy found to have contracted the virus in November 2019, which some experts believe indicates that a COVID-19 outbreak occurred in Italy earlier than in China's Wuhan, which recorded the earliest COVID-19 symptoms from a patient on December 8, 2019 and has since been labeled as the origin of the virus by some Western countries.

Italy identified the novel coronavirus in a 4-year-old boy on December 5, after he developed a cough on November 21, 2019, according to a new study published by the US Centers for Disease Control and Prevention's Emerging Infectious Diseases journal, the latest report suggesting that the disease hit Europe earlier than once thought.

That was about three months before the first identified case of coronavirus disease in Italy.

Researchers identified severe acute respiratory syndrome coronavirus 2 RNA in an oropharyngeal swab specimen collected from the boy who lived in the surrounding area of Milan and had no reported travel history, according to the study.

The study, corresponding with other evidence of an early COVID-19 spread in Europe, dates the beginning of the outbreak back to late autumn 2019. However, earlier strains also might have been occasionally imported to Italy and other countries in Europe during this period, the study said.

The Italian scientists used swab samples rather than antibodies that they previously detected, which provides significantly more accurate findings, said a Beijing-based anonymous virologist, who explained that the former possesses a higher specificity for virus testing than antibodies, which sometimes result from cross infection.

The new study found that sequence analysis from the boy displayed 100 percent compatibility to the reference sequence from Wuhan as well as to sequences of other coronavirus strains circulating worldwide at a later stage.

The RNA sequence found in the Italian boy shares a high level of similarity to that observed in Wuhan, suggesting it is possible that infection occurred in both places at the same time, but it is difficult to identify who passed it on first. If virus samples found in those two places share the same sequence, we can prove they are simultaneous, but we cannot prove who came first, the virologist said, noting more results from the virus or time sequencing of the Italian swab sample are needed to shed light on the question of who passed the virus on first.

However, the findings were only the latest coronavirus evidence in a series regarding environmental and human specimens found in Italy, the first Western country severely hit by the COVID-19 epidemic with the first known case reported in the Lombardy region on February 21.

Scientists in Italy say they have found evidence the virus was circulating much sooner by checking blood samples of patients taking part in a lung cancer screening trial in Italy between September 2019 and March 2020, and the study has been published by the National Cancer Institute's scientific magazine Tumori Journal on November 11.

Another study found that the presence of the virus was also found at samples collected in untreated waste-water in the Milan area as early as mid-December 2019.

Some Chinese analysts believe all of the evidence found in Italy before or around December 2019 indicates that Italy may have had the COVID-19 outbreak, rather than sporadic cases, before last December, although more studies are needed.

Wang Guangfa, a respiratory expert at Peking University First Hospital, told the Global Times on Thursday that the recent series of evidence on the novel coronavirus found in both environmental and human blood samples in Italy revealed that the coronavirus was circulating widely in Italy before Wuhan reported its first confirmed patient, and Italy was just another place that was hit by the outbreak at an early stage, just like Wuhan.

It's possible that the virus may have only infected a small number of humans before mutating into something highly contagious, Wang said.

"But that does not mean Italy was the origin of the COVID-19 pandemic, and we still do not know where the coronavirus originated from, and when and how this virus infected humans for the first time," Wang said. 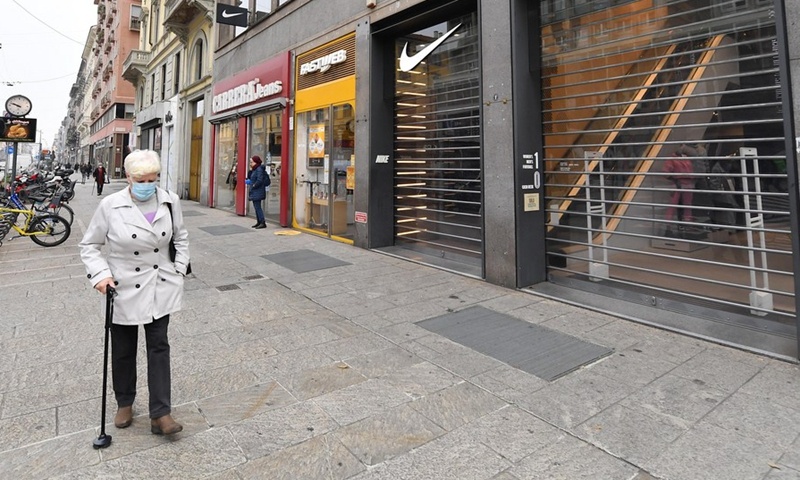 A woman wearing a face mask walks past a closed shop in Milan, Italy, Nov 6, 2020. Photo:Xinhua

Italy's series of evidence is significant in demystifying the source of the virus, as it not only proved that the first patient may not be from Wuhan, but also the virus may not come from Chinese animals such as bats, a Beijing-based anonymous immunologist, told the Global Times.

"Wuhan is also a victim and China is completely innocent in causing the COVID-19 pandemic," the immunologist said.

Not just in Italy, other scientific studies also suggested the novel coronavirus appeared in the US in mid-December 2019 and in France in late December, before or around the time the virus was officially identified in China.

In March, Reuters reported that 74 cases of the COVID-19 have been confirmed in the US, with one death. Then the US announced a "radical expansion" on coronavirus testing.

However, some experts have been doubting if the COVID-19 cases have been mixed among respiratory illnesses which have similar symptoms, including a mysterious e-cigarette-caused lung disease, in the US without being tested out.

Wang said that countries should collect all of their domestic evidence and submit them to the WHO for further analysis to assist in determining the timeline of the earliest human case of COVID-19.

The anonymous virologist pointed out that previous studies suggest bats and pangolins may be the host of such a virus, "but we cannot exclude the possibility that other animals are also carriers of the coronavirus."

From where the virus jumped to humans, evidence from epidemiological studies is also needed to solve the puzzle, said the expert.

Over the past few months, as mounting sporadic outbreaks in China were found to be related to imported cold-chain products, which also propelled virologists and epidemiologists to venture to an alternative hypothesis: are cold-chains another route of transmission?

Wu Zunyou, the chief epidemiologist of the Chinese Center for Disease Control and Prevention told the Global Times previously that in retrospect of the early outbreak in Wuhan, patients came mainly from the frozen seafood area.

Wu also said that seafood causing flare-ups in Beijing, Dalian and Qingdao also raises the question whether the early outbreak in Wuhan was also triggered by imported seafood. "This gives us a lead, a new way of thinking," said the top epidemiologist.

Experts said tracing the source cannot be used to smear other countries for political purposes.

During the early outbreak in Wuhan, Chinese experts did not specifically consider foreign sources; instead, they made huge efforts to trace the domestic source from animals and others, Wang said.

"However, China failed to find a domestic source while more evidence about the early outbreak was emerging globally, suggesting that the virus could have been brought into Wuhan from other countries, although we have no evidence on exactly which country, when and how the virus came to China," Wang said.