Italy renews attempts to form a government and end turmoil 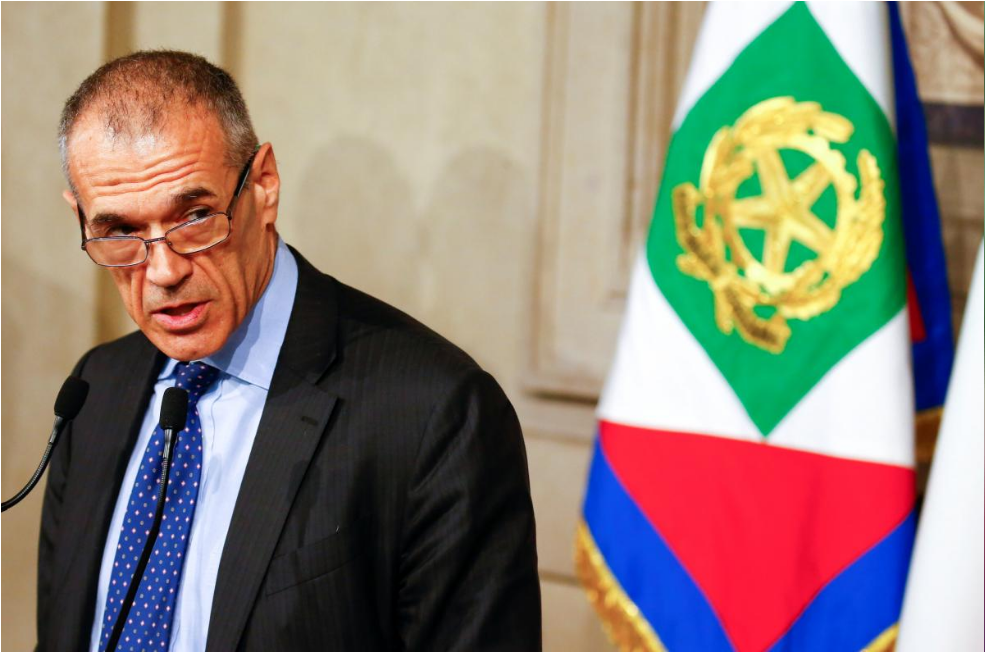 Italy’s political crisis moved into unchartered waters on Wednesday, as the head of state sought a last-minute political compromise to end the three-month search for a government and restore calm to financial markets.

Prime Minister-designate Carlo Cottarelli, tasked by the president with calming tensions and laying plans for repeat elections later this year, raised hopes of a breakthrough on Wednesday with comments suggesting compromise was in the air.

Italy has searched for a government since inconclusive elections in March. Two anti-establishment parties came close to forming a ruling coalition last weekend, but backed away after the president demanded a change in their cabinet lineup.

The 5-Star Movement and the right-wing League abandoned their bid to take power in a coalition after President Sergio Mattarella vetoed their choice of 81-year-old eurosceptic Paolo Savona as economy minister.

The prospect of the political crisis being drawn out further with possible new elections later this year has brought turmoil to financial markets.

But Cottarelli, whom Mattarella brought in as a stop-gap prime minister, was quoted by ANSA news agency as saying that new possibilities had emerged “for the birth of a political government,” implying that a government headed by politicians rather than technocrats like himself could be in the offing.

“These circumstances, also considering the market tensions, have caused me to wait for further developments.”

The 5-Star also seemed willing to rethink its weekend decision to defy the president’s veto and go back to elections.

The parties are now trying to find “a point of compromise on another name” for the economy ministry, said a source close to 5-Star, the single-biggest party in the new parliament.

League leader Matteo Salvini, who is surging in opinion polls, appeared to throw cold water on the notion that his party and 5-Star could try again to form a coalition.

He said Italy should return to an election as soon as possible. “The earlier we vote the better because it’s the best way to get out of this quagmire and confusion,” he told reporters.

He did, however, appear open to an interim administration to govern for a few months, saying an election at the end of July would be “disruptive” for Italian seasonal workers.

He invited Mattarella to make the first move, to “explain to us how we can get out of this situation”. A League source said the party would not block any quick political solution that would enable Italy to deal with possible “emergencies”.

Cottarelli, currently, has no major parliamentary support for a stopgap government of technocrats.

Despite the softer tone from 5-Star and Cottarelli’s intriguing remark, a top adviser to Salvini said the League was not prepared to abandon Savona, the sole obstacle to the League and 5-Star winning the president’s blessing for a coalition.

Repeat elections are likely to lead to a eurosceptic government in Rome, a prospect that has rocked financial markets, with the euro sinking to multi-month lows.

The European Central Bank is keeping a watchful eye on the market rout and political crisis engulfing Italy but sees no reason to intervene at this time, sources said.

Three officials told Reuters the ECB was not considering taking action because indicators were not yet showing signs of stress among banks and the central bank did not have the tools or mandate to solve what was essentially a political crisis.

A surprise breakthrough between the president and 5-Star/League would ease uncertainty but still usher in a coalition planning to ramp up spending in the heavily indebted nation and push for changes to European Union and euro-zone fiscal rules.

In the event of continued stalemate, Italy will go back to elections, with most major parties calling for the president to dissolve parliament and hold a vote as soon as July 29.

A recent opinion poll showed the League, which says fiscal rules governing the euro zone are “enslaving” Italians, would take a quarter of the vote, up from 17 percent on March 4.

The IPSOS poll, carried out on May 16-17 and published in the Corriere della Sera newspaper on Wednesday, showed support for the League’s would-be coalition partner, the 5-Star Movement, steady at about 32.6 percent — implying a much more comfortable majority if the pair were to try again to govern.

“I am worried by the direction things are moving in,” said Diego Galli, a Rome resident interviewed on the street, adding that the anti-establishment coalition “seems extremist, against Europe”.

Italian government bonds, which suffered one of its most dramatic speculative attacks in years on Tuesday, found some support from local investors on Wednesday.

The yield on 10-year bonds edged away from four-year highs and two-year yields, the focus of earlier attacks, also fell.