WORLD Italy returns to lockdown a year after COVID-19 outbreak

Italy returns to lockdown a year after COVID-19 outbreak 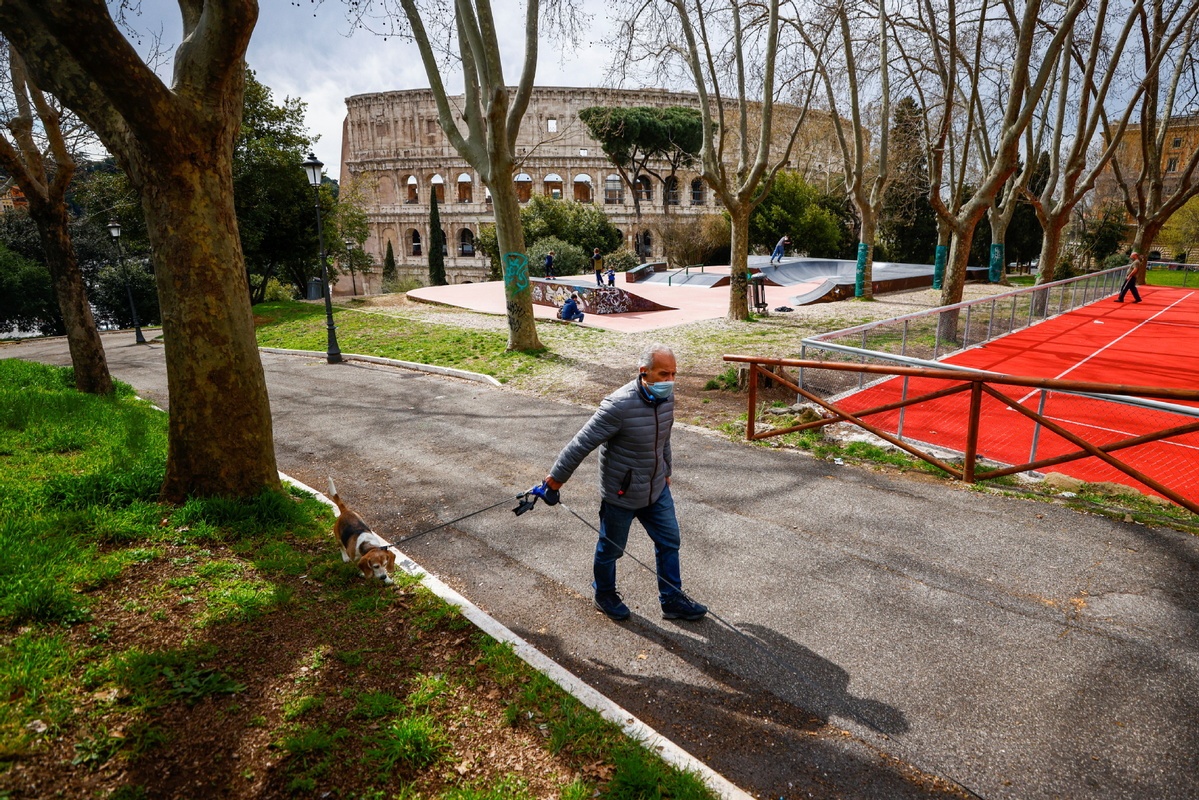 A man walks his dog near the Colosseum on the second day of lockdown, as the country struggles to reduce the coronavirus disease (COVID-19) infections, in Rome, Italy, March 16, 2021. (Photo: Agencies)

One year after northern Italy was first locked down amid the COVID-19 outbreak, most regions in the country are reimposing restrictions to curb a resurgence of the virus, closing down non-essential shops and reducing the movement of people.

Since Monday, 10 populous regions and the Autonomous Province of Trento have been labelled as high-risk "red zones." The containment measures will last until Easter in early April.

In northern Italy's Veneto region, 1,901 new cases were confirmed on Tuesday alone, with the number of patients hospitalized or in intensive care units also on the rise.

Regional President Luca Zaia is concerned about the deteriorating situation, and told a regular press conference that "the alarming growth of cases is confirmed by both swab tests and hospitalizations."

"In this scenario, we will need to activate the COVID hospitals again, and we foresee a difficult situation for at least two weeks," he said.

On pedestrian shopping streets in the region, fashion shops were shut down, while patrolling police persuaded passers-by to return home. Like last year, pedestrians have to justify why they are outside and where they are going -- any infringement of the anti-virus rules will be punished with a fine of at least 400 euros (476 U.S. dollars).

Compared to the first lockdown in March 2020, people have a different feeling about COVID-19 restrictions this time.

"Last year everyone was shocked, afraid. You didn't understand what was going on, the perception of the intensity of the virus," said Andrea Bedorin, a communications consultant in Italy.

"Now you know more or less what is going on. We are equipped with masks, with devices, with supply of gel; hospitals know the procedures that they have to undertake," he added.

However, Bedorin said he senses the fatigue among Italians in the fight against COVID-19, who are further frustrated that the ongoing vaccination campaign in Italy has lagged behind that in Britain.

"You can feel the fatigue, because you don't see the end of this nightmare, I can say, because it seems there is no end at all. Also mentally you don't reach a level where you can plan the future months," he said.

Taxi driver Moreno Cabbia said he does not understand why the country is returning to a critical situation despite its one-year fight against the pandemic. "I see that many countries in a good condition were in lockdown for a longer period than what we did in Italy. In this regard, I still don't know what is the best solution."

As an essential worker exempted from the restriction measures, Cabbia said it is important to keep spirits high and be optimistic. "It is already good that we haven't been infected. We have to think positive, otherwise we will all end up at the psychologist's."

"They are more desperate and after one year the problem is still there," she said, adding that the authorities should have implemented a lockdown as early as October to stop the fast-spreading virus and the growth of new strains.

"We are not ahead of the game. We are behind the game and this game is not in our hands," she said.

Regarding the fact that some people keep defying the containment rules, Longo said she believes there is a form of "provocation" in the younger generations, who only a few days earlier frequented bars and went shopping.

"I see there is a lack of understanding of the problem. There are people who realize the gravity of the situation and others who do not," she said.

Speaking about the public health strategies in such Asian countries as China, Longo said, "according to the news and data coming from Asia, their approach, in the fight against the virus, was more effective, so the real issue is to apply that model here."