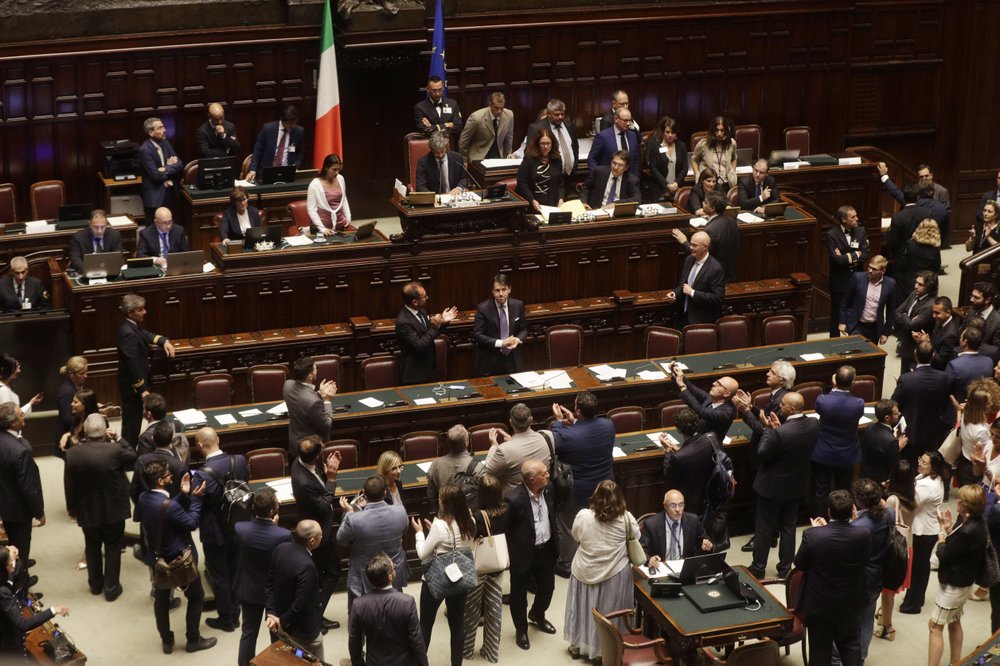 Italian Premier Giuseppe Conte, background center, acknowledges the applause at the end of a confidence vote at the Lower Chamber in Rome, Monday, Sept. 9, 2019. (Photo: AP)

Italian Premier Giuseppe Conte on Monday won the first of two mandatory confidence votes on his four-day-old coalition of rival parties, after a day of fielding insults during a boisterous Parliament session from an opposition outraged that Italy got a new government instead of a new election.

The 343-263 vote in the lower Chamber of Deputies, with three lawmakers abstaining, was the preamble to Tuesday’s vote in the Senate. The vote in the upper chamber promises to be tighter, since the coalition holds only a handful votes more than needed for a simple majority, and any defections in Conte’s unnatural coalition could cost him dearly.

Should Conte lose, he must resign. That would make elections this fall all but certain.

Much of Monday’s 11-hour-long session in the Chamber of Deputies seemed more like a soccer stadium with frenzied fans than a hall of lawmakers weighing whether to confirm Italy’s second government of mismatched partners in 15 months.

Practically eclipsed in the raucous atmosphere was any debate over Conte’s main policy thrust — a government focused on economic growth and determined to keep Europe united.

In the square outside the Chamber, Matteo Salvini, leader of the “Italians first,” right-wing League party who brought down Conte’s first government, rallied a few thousand supporters who clamored for their say at the ballot box.

Shouts against “robbers of sovereignty” and “elections now” rang out in the crowd. A few wrapped Italy’s red-white-and-green flag around them like a shawl.

“Inside, there’s the regime that knows it’s about to fall and is acting like Marie Antoinette,” Salvini told the rally, sarcastically likening Conte’s cobbled-together coalition to the tone-deaf attitude of the French queen.

Inside the legislature, the opposition called out “buffoon,” ″elections, elections” and “sold” to indicate Conte had betrayed voters in a quest for a new mandate.

Conte lobbed his own barbs at Salvini, who abruptly withdrew the League as a partner in the previous government in a bid for an early election that would make him premier and bring him “full powers.”

“That every year a leader can think he can bring the country to elections is irresponsible,” Conte said.

The premier forged a new coalition last week out of rival parties that have sparred nastily for years — the populist 5-Star Movement that he led in a first coalition and the center-left Democratic Party to replace the League.

Each of the two major partners has been plagued by squabbling, including over whether this marriage of convenience is a good idea.

More than any policy convergence, the alliance of 5-Stars and Democrats mainly hinges on mutual determination to keep out of power Salvini and his anti-migrant League, soaring in opinion polls for months. The League was Italy’s biggest party in European Parliament elections last May, practically doubling in a year its percentage of support from voters.

Conte outsmarted Salvini in forming the alternative coalition, also with the aid of a tiny left-wing party which has one Cabinet minister.

Salvini and his allies, including a far-right party with neo-fascist roots, contend Italians deserved to have early elections.

“Our voice counts. They have to respect the people’s voice, we must vote,” said Daniela De Licio, who turned out for the rally outside Parliament from the Rome suburb of Tivoli.

Conte vowed that his new government would solidly support a strong, united Europe and focus on getting Italy’s stubbornly stagnant economy growing again.

Buoyed by his booming popularity among a voter base that blame migrants for crime and taking work away from Italians, Salvini while interior minister stiffened an already-tough government policy on illegal immigration, with a decree that harshly enforces a ban on charity migrant rescue boats from entering Italian ports.

Conte indicated that migrant policy will be tweaked, but offered no details.

One lawmaker from a tiny opposition party expressed ambivalence about the new coalition, still containing populists. However, Riccardo Magi, from the More Europe party, announced reluctant support, saying the risk of an “illiberal and anti-European drift” if Conte’s government falls would be worse.