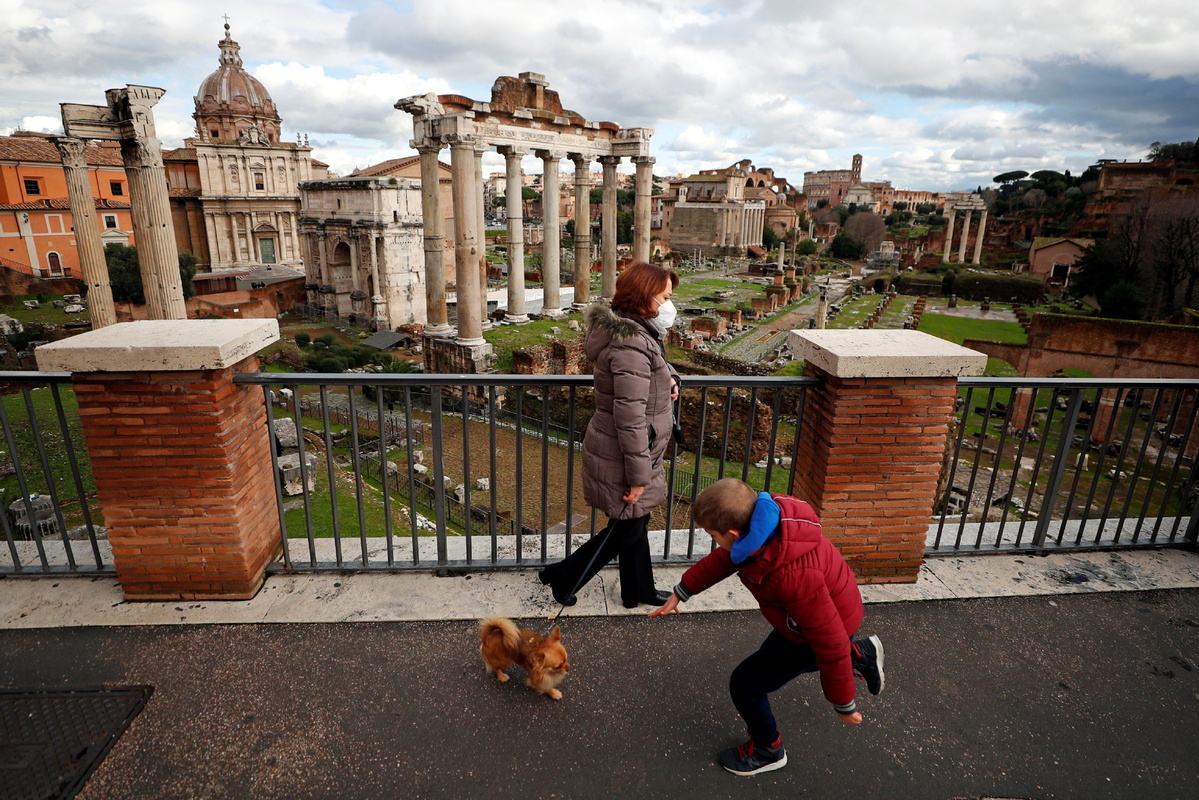 A woman wearing a protective face mask walks her dog near the Roman Forum in Rome, Italy, Jan 4, 2021. (Photo: Agencies)

ROME - The main indicators tied to the coronavirus outbreak in Italy so far in 2021 remained below peaks recorded in late November and early December, as the country's national holiday lockdown drew to a close. But health experts warned it was still too early to know how effective the restrictions put in place for the holidays would prove to be.

According to data from the Ministry of Health, in the 24-hour period ending Monday, Italy saw 10,800 new infections and 348 new deaths. The infection figure is down from 14,243 a day earlier while the death number is up by one.

But both figures reflect a gradual downward trend that started in late November. The one-day infection rate is the fourth-lowest since mid-October, with all of the numbers below 11,000 recorded in the last ten days. Similarly, the 24-hour death toll is among the five lowest recorded since the start of November, with all five of those days coming in the last ten days.

The number of patients in intensive-care units saw little change compared to recent days: there were 2,579 recorded Monday, down by just four compared to the day before and 14 more than ten days ago.

The number of daily recoveries continued to outpace new infections: there were 16,206 new recoveries recorded Monday, bringing the total to 1,520,106, but the recovery rate has remained mostly flat over the last two weeks.

Italy's national holiday coronavirus lockdown, which went into effect last Dec 24, will be lifted starting Thursday. As of late Monday, political and health officials were still debating what should happen afterward. But there was a consensus that the new rules would err on the side of caution, with many national and regional officials warning that if rules are eased too quickly it could result in a new surge in infections.

Minister of Health Roberto Speranza told the Italian news agency ANSA that the new plan would "correctly balance" health needs with the reopening of some parts of the economy.

Walter Ricciardi, a senior Ministry of Health official, predicted a new third wave of the virus could hit the country in the second half of this month.

"A third wave is building and could hit us within two weeks," he said in an interview with the news program TG 24. Ricciardi predicted the country would see a "non-trivial increase in the contagion" and called for a prolonged lockdown to slow the virus' spread.

Virologist Fabrizio Pregliasco echoed Ricciardi's remarks, saying he feared Italy was "under-estimating the pandemic" and predicting that infections would soon start to climb.

One potential challenge is that most schools are set to reopen on Thursday, though some regional governors called for the reopening to be delayed until the impact of the holiday period was clearer. Some analysts said that the reopening of most Italian schools starting in September contributed to the dramatic rise in infections starting in October after a lull during the warmer summer months.

Worries over a new wave of infections did not stop Minister of Culture Dario Franceschini from suggesting gyms, cinemas, theaters and museums reopen in the second half of January, with health rules in place. Franceschini said such a move would "give new hope" to residents without increasing health risks.

Italy is now in its second week of vaccinations. According to the Ministry of Health data, Italy will have to administer 51,000 vaccinations a day in order to have everyone in the country vaccinated by the end of the year, and that the country is already behind pace. Domenico Arcuri, the country's commissioner for coronavirus emergency, said the problem is due to uneven responses from different regions.