WORLD Italy's COVID-19 infections at highest level since May 16

Italy's COVID-19 infections at highest level since May 16 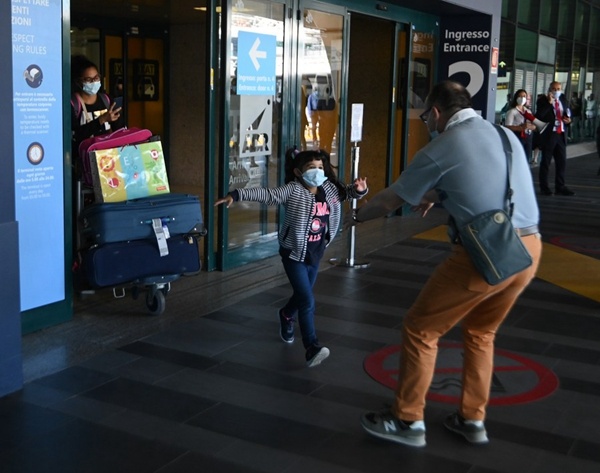 A man reunites with his daugther and wife from Colombia after about four months due to the lockdown situation at the Fiumicino airport in Rome, Italy, June 3, 2020. (Photo: Xinhua)

Italy finds itself at a crossroads in its fight against the global coronavirus outbreak, with some government officials questioning whether the country should walk back some of its efforts to reopen the country's beleaguered economy.

The country's infection rate is still well below its peak period of more than 4,000 new infections a day in 23 of 25 days in late March and early April, and the new figure is dwarfed by infection rates in the hardest-hit countries that include the India, Brazil, and the United States, all of which saw more than 40,000 daily infections this week.

But the increase in Italy has been enough to make Italian officials second-guess recent steps to reopen the country's economy. On Thursday, Italian Health Ministry consultant Walter Ricciardi said that if infection rates do not drop in the coming days, regional elections scheduled for Sept. 20-21 could be pushed back, and that plans to reopen schools in early September could be at risk.

The Technical and Scientific Committee appointed to oversee the reopening of schools met on Wednesday and acknowledged that recent trends were "a concern." But school plans were not changed and in a statement, the committee said that safely reopening schools remained a priority for the government. The committee will meet again next week, its last meeting before schools are set to open their doors.

Italy restarted its top-division football season in June -- albeit with coronavirus restrictions in place -- but now some media are speculating the season could be put in doubt after players on AS Roma and Cagliari tested positive for the virus.

Cagliari is the capital of the Italian island region of Sardinia, which as recently as three weeks ago was billing itself to tourists as a coronavirus-free destination. Now, the island has emerged as Italy's newest hotspot, with the highest per-capita infection rate in the country. Just this week, a tourist village on the island was ordered to quarantine all 470 visitors and staff as 21 active cases there were discovered. Police apprehended at least two guests at the village who attempted to escape.

Lazio, the region that includes Rome, reported that more than a third of the region's positive cases of the virus -- the region has reported more than 100 new daily cases so far this week -- came from travelers returning from Sardinia. Lazio Health Counselor Alessio D'Amato said Lazio would start testing every passenger from Sardinia on arrival and could consider banning flights and ferries from the island.

Despite all that, most indicators of the virus remain largely under control. Thursday's national death toll from COVID-19 was just 6, and one-day death totals have been in single digit all but two days so far this month.

The number of patients in intensive care units have inched higher in recent days: 68 on Thursday, up by 2 compared with a day earlier and 11 higher than a week ago. But the totals are a small fraction of the levels from March, when intensive care patients peaked at nearly 4,000, threatening to cripple the country's health care system.

On Thursday, the Ministry of Health reported 180 new patients have recovered from COVID-19, bringing the total so far to 204,686. The number of active cases totaled 16,014, an increase of 654. Active cases, which had steadily declined between early June and late July, are now on the rise.

The six new deaths reported Thursday brought the toll to 35,418 since the start of the outbreak in Italy in February.