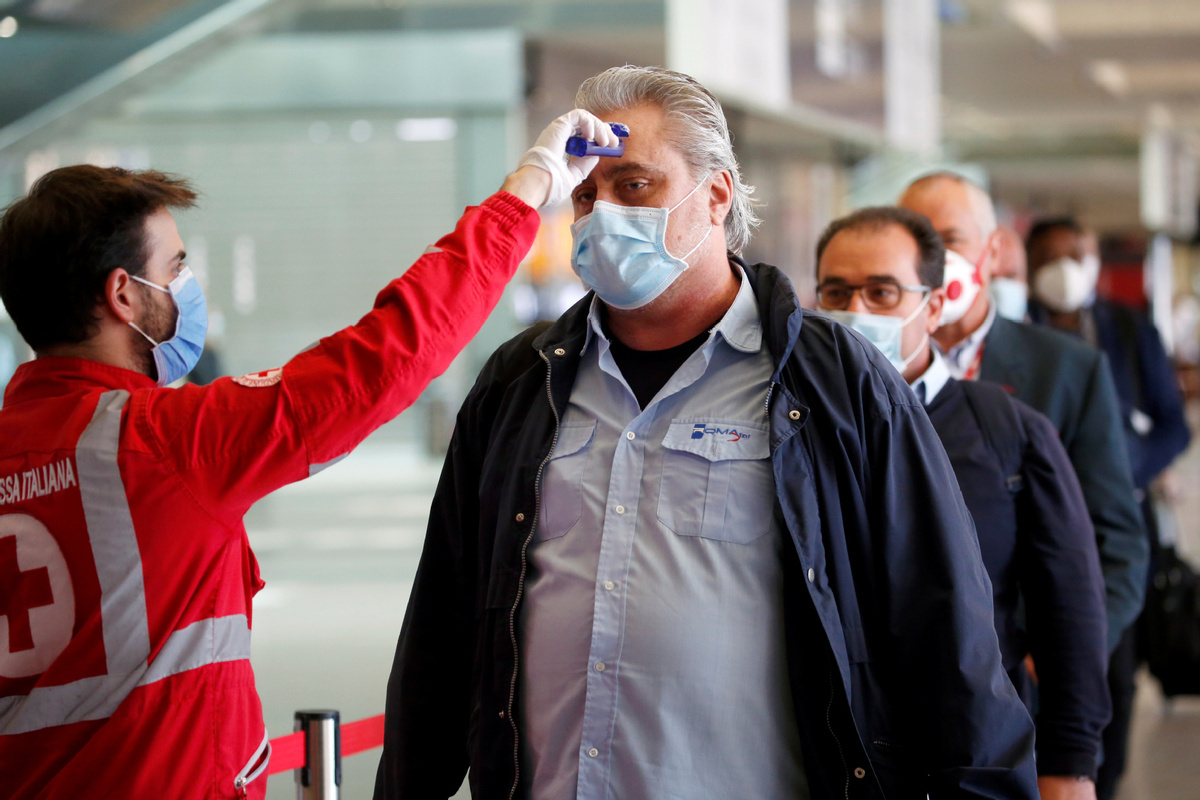 A member of the Italian Red Cross checks travellers' temperature at Roma Termini station, as Italy begins a staged end to a nationwide lockdown due to the spread of the coronavirus disease (COVID-19), in Rome, Italy May 4, 2020. (Photo: Agencies)

Italy registered 208 new coronavirus cases on Monday, showing a trend slightly upward, according to the latest data by the Health Ministry.

This increase resulted from a moderate rise in active infections, which grew by 67 to 14,709 on a daily basis.

Meanwhile, the country registered 133 new recoveries over the past 24 hours, which brought to 192,241 the total of people cured since the pandemic broke out in the northern regions late February.

Some regions in the country decided to step up health checks to act swiftly on new cases of infections, trying to prevent possible outbreaks at the local level.

In northeast Veneto, which was among the worst-hit in the pandemic and had the most successful containment results, local authorities increased sanctions against citizens not abiding by some anti-virus measures.

More specifically, a 1,000-euro (1,131 US dollars) fine will be given to people violating the mandatory period of isolation at home, which is the situation required from someone who tests positive for the coronavirus but is asymptomatic or with mild symptoms.

A swab test will also be compulsory for anyone returning from traveling outside European Union (EU) countries, if they show body temperature higher than 37.5 degrees Celsius.

The regional government took this step after the case of an Italian entrepreneur, who came back from Serbia, tested positive for the COVID-19 but violated home confinement, and then refused hospitalization after showing the first symptoms.

Among those he met, there were now five people newly infected and further 89 people being monitored under home confinement, according to regional authorities.

"The true concern for us in Veneto -- where the situation is now absolutely under control (in terms of pandemic trend) -- are the possible infections being brought in from abroad," governor Luca Zaia told all-news TV channel Sky TG24.

Zaia also explained 28 new cases of contagion were registered in Veneto from July 1 to July 6. Out of them, 15 cases concerned foreign citizens returning from abroad.

In the Lazio region surrounding Rome, the regional government was also about to pass a specific provision in order to make mandatory swab tests at the Fiumicino airport on all passengers arriving on board of flights from the Bangladeshi capital Dhaka.

This was decided after at least 12 Bangladeshi nationals tested positive for the coronavirus since late June in Rome. They had arrived with international flights departed from Dhaka, Lazio Health Councilor Alessio D'Amato told local media Monday.

Also on Monday, the Economy and Finance Ministry said the state's tax revenues dropped by 9.3 percent between January and May due to the pandemic.

"The tax revenues amounted to 149.7 billion euros, marking a decrease by 15.3 billion euros compared to the same period of the previous year," the ministry said in a statement.

It explained the negative variation was a result of the measures the Italian cabinet approved in order to deal with the economic impact of the health emergency.

"The significant drop, already seen in March and April, increased in May due to the effects of the April 8 Decree, which provided for the postponement of tax and social security payments for those in business, arts, and professional activities," the ministry said.