Italy's leader visits Russia for talks with Putin on trade 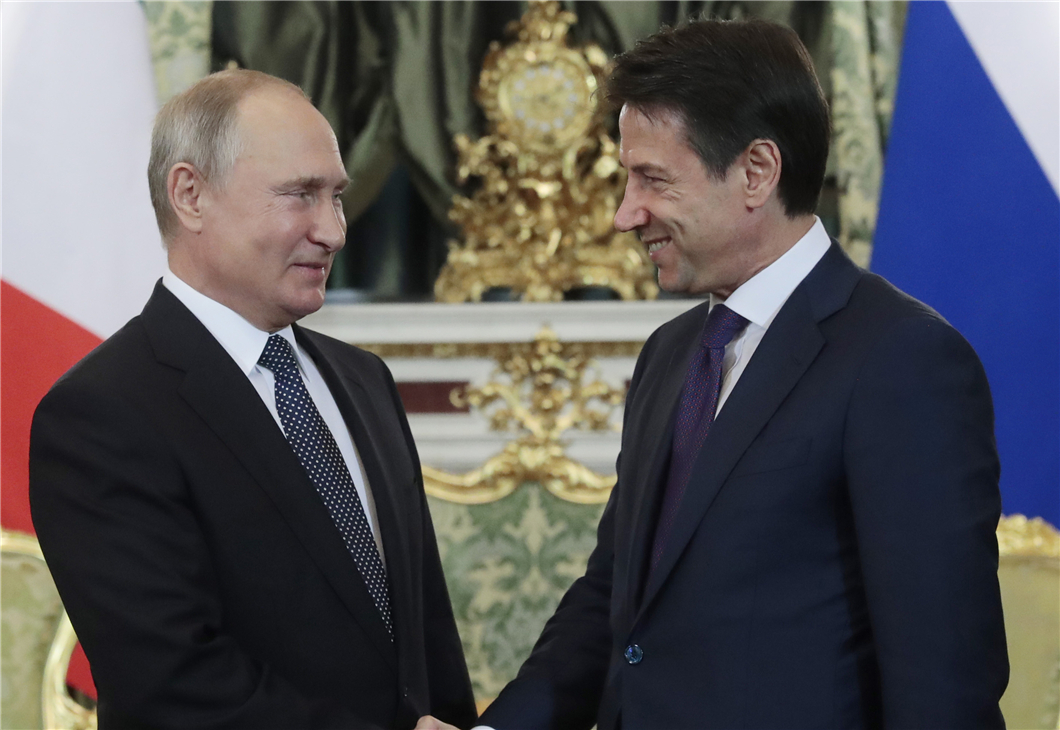 Conte, on his first trip to Russia, began talks with Putin in the Kremlin by saying that the two countries have managed to preserve the "quality and volume of our ties." He invited Putin to visit Italy in the near future.

Ties between Russia and Italy have been badly damaged by European Union sanctions against Russia for its aggressions in Ukraine and by Moscow's retaliatory moves.

Bilateral trade has slowly increased in recent years as the Russian economy has climbed out of recession, but it still remains a fraction of what it was before EU penalties triggered by Russia's 2014 annexation of Ukraine's Crimean Peninsula and Russian support for an insurgency in eastern Ukraine.

Several rounds of EU and U.S. sanctions have crippled investment projects. Earlier this year, the Italian energy giant ENI bailed out of a joint project with Russia's top state oil company, Rosneft, to tap Black Sea oil reserves. ENI was also considering a suspension of another such venture in the Barents Sea, Russian news agencies reported.

"Regrettably, Italy's niche in the Russian market has decreased but the volume of our economic ties have remained strong," Putin said as he greeted Conte. "Despite the difficult times, our political contacts have remained on a high level."

The Russian leader said that "business-like but also very warm relations" between the two countries have been "supported by all political forces both in Italy and in Russia."

The Italian agricultural lobby, Coldiretti, emphasized the need to seek an end to the trade restrictions, saying that the sanctions have cost Italian food producers 1 billion euros ($1.38 million) since they were imposed a little more than four years ago. It added that Italian restaurants in Russia were at risk due to a lack of ingredients.

"In some cases dishes have disappeared from the menu, in other cases items have been replaced with cheap local or foreign products without any indication on the menu," Coldiretti said.

During the Kremlin talks, Putin also thanked Italian authorities for providing quick assistance to Russian soccer fans who were injured when an escalator in Rome's subway system collapsed on Tuesday night.

Earlier in the day, Conte met with Russian Prime Minister Dmitry Medvedev who voiced hope that Conte's visit would give a new impulse to Russian-Italian cooperation. He also laid a wreath at the Tomb of the Unknown Soldier under the Kremlin wall and met with Italian businessmen.

"Italy is a country that enjoys good health, the fundamentals of our country are solid," Conte said on Facebook after meeting with Italian entrepreneurs in Russia a day after Europe rejected Italy's spending plans as dangerous to the country's debt level.

"The government will do its part to make Italian companies grow," Conte said. "There is a big commitment in that direction, as the measures in the maneuver demonstrate."

He added the Italian government was "making it easier to invest, thanks to the simplification of bureaucracy and making it more convenient to hire, thanks to tax breaks."