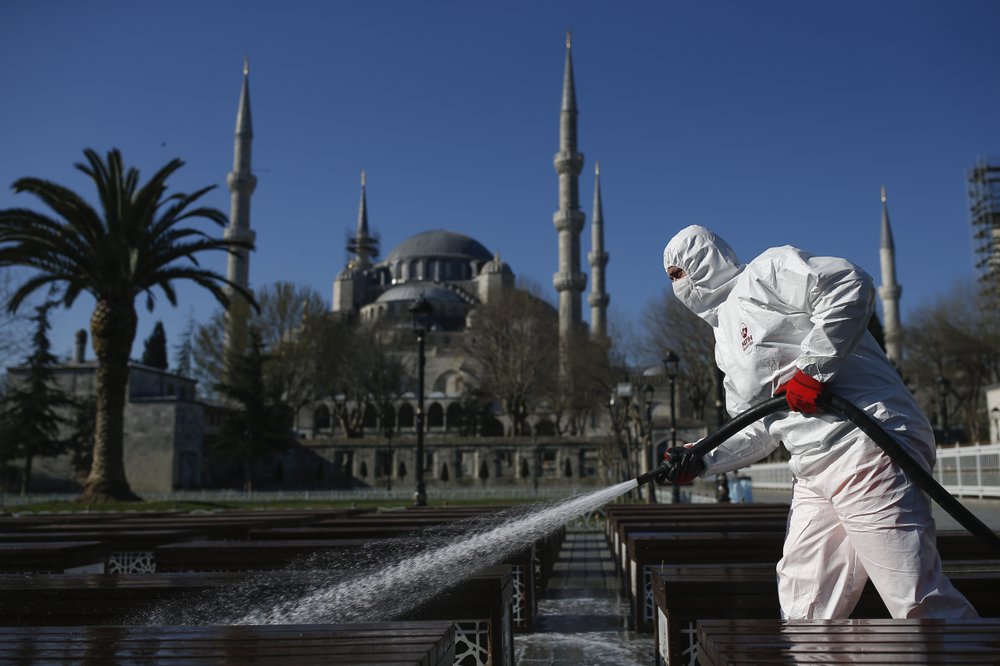 More than 60 percent of the latest deaths occurred in the northern region of Lombardy, whose hospitals have been reeling under a staggering case load that has left intensive care beds hard to find and respirators in dire supply. The new increases come nearly two weeks into a national lockdown in a desperate bid to contain the contagion.

Almost a week into tight restrictions on free movement and the closure of most shops in Spain, police intensified their efforts to enforce confinement rules with fines and extra patrols to stop city-dwellers with second homes in the country from leaving town for the weekend.

Spain now has the third-highest number of infections worldwide. On Saturday it reported almost 5,000 new cases in the past day, bringing the total to nearly 25,000. The death toll rose to 1,326, up from 1,002 Friday.

As hospitals and nursing homes buckle under the burden of the virus outbreak, Spanish health authorities have acknowledged that some intensive care units in the hardest-hit areas are close to their limit, and warned that they expect infections to continue to rise before measures to reverse the trend have an effect.

The army was building a field hospital with 5,500 beds in a convention center in Madrid, where hotels are also being turned into wards for virus patients without serious breathing problems.

Dr. Olga Meridiano, who treated victims of a 2004 jihadist bomb attack in Madrid that killed nearly 200 people and wounded many times more, said nothing prepared her for the national health tragedy that Spain is now enduring.

“I have been through many situations,” she said from the central city of Guadalajara, where she works in a public hospital. “But nothing is like this.”

“If we keep seeing daily increases of 23%, this cannot be withstood much longer,” Meridiano said. “We are doubling up on our shifts. We have strategies to hang in there this week, but beyond that we need the situation to improve because we professionals are bearing a lot of pressure, including emotional.”

In Germany’s southern state of Bavaria, town squares were empty. Pigeons outnumbered people in London’s usually bustling Trafalgar Square and Leicester Square a day after the British government ordered the closure of all bars, restaurants, movie theaters and other places where people congregate.

But shoppers still flocked to street markets in both countries, is a sign that restrictions were being interpreted in a patchwork fashion.

The number of confirmed cases of COVID-19 recorded in Africa rose above 1,000 Saturday, according to the Africa Centers for Disease Control and Prevention. At least 40 of Africa’s 54 countries now have cases.

Almost 287,000 cases have been confirmed globally, including more than 11,900 deaths, according to a running tally by Johns Hopkins University. Nearly 89,000 people have recovered.

For most people, the new virus causes only mild or moderate symptoms, such as fever and cough. For some, especially older adults and people with existing health problems, it can cause more severe illness, including pneumonia. The vast majority recover.

Officials in many countries are desperate to prevent — or at least limit — a repeat of what has happened in China and southern Europe. The coronavirus outbreak overwhelmed medical services in the central Chinese city of Wuhan earlier this year and now is pushing them to the limit in Italy, Spain, and France.

Italy’s surging case numbers have frustrated health officials. Statements by authorities earlier on in the outbreak had raised hopes that new infections might soon start dropping off. But on Friday, officials reported further record increases, with 5,986 new cases and 627 new deaths. The country, which has Europe’s largest outbreak, now has at least 47,021 cases and 4,032 dead.

Health Minister Roberto Speranza called for a “great alliance” between citizens and institutions, saying “what counts more is the behavior of every individual.” Giuseppe Sala, mayor of Milan, capital of the hardest-stricken region of Lombardy, tried to rally the city’s 1.4 million citizens, tweeting that “by now, we have understood, this is a marathon, not a sprint.”

Germany’s southwestern state of Baden-Wuerttemberg on Saturday offered to take in patients from the neighboring French region of Alsace that’s struggling with a surge of infections overwhelming hospitals.

Britain still lags behind Italy, Spain, and France in the spread of the virus, but the country’s overstretched health system is creaking. The state-funded National Health Service has about 4,000 critical-care beds and some 5,000 ventilators, and officials say that’s far fewer than will be needed as the number of cases spikes in the coming weeks. Britain, which has recorded 3,983 confirmed cases of COVID-19 and 177 deaths, has already asked 65,000 retired nurses and doctors to return to work.

Workers near Moscow are rushing to build a clinic to treat hundreds of coronavirus patients as Russia prepares for a wave of infections. Placards in the style of Soviet propaganda posters have been erected near the site, with one showing Mayor Sergei Sobyanin pointing at the viewer and the slogan “Builders — Minutes count!”

China has been sending aid to several European countries, promoting its expertise and experience gained from fighting the outbreak at home. An Air China flight carrying 18 tons of medical supplies including hundreds of thousands of surgical and protection masks landed in the Greek capital, Athens, Saturday morning.

Turkey more than tripled the number of countries to which flights have been suspended to 68, as authorities banned picnics, barbecues and send-off gatherings for new soldiers.

Authorities in Cyprus turned away a boat carrying around 100 migrants, citing government directives banning the entry of foreign nationals to prevent the spread of the coronavirus.

Colombian President Iván Duque announced Friday night that everyone would be required to isolate in their homes for three weeks starting Tuesday. Peru, Ecuador, and Venezuela already are in lockdown.

Some small relief came to the Madrid’s Severo Ochoa hospital on Saturday when an army emergency unit arrived to take 15 patients to a huge field hospital the military set up in a convention center in the capital.

Otherwise, the hospital is working over capacity and receiving help from the local community: An educational center donated a load of masks and gloves. A group of football fan clubs brought hundreds of bottles of water.

For hospital spokesman Jorge Rivera, equally important is the support that normal citizens are showing the nation’s health workers each evening at 8 p.m. when Spaniards open their windows and applaud, shout, flash lights, and sometimes blast music to show their appreciation for their efforts.

“For us, it is a boost of adrenaline, for our morale,” Rivera said from work. “It says that we are all in this together, working to get through this emergency and recover our lives.”