Italy's president to open new round of talks on gov't crisis

Italian President Sergio Mattarella will open a second round of consultations on Tuesday and Wednesday, in a new attempt to solve the ongoing government crisis, the president's office revealed on Monday. 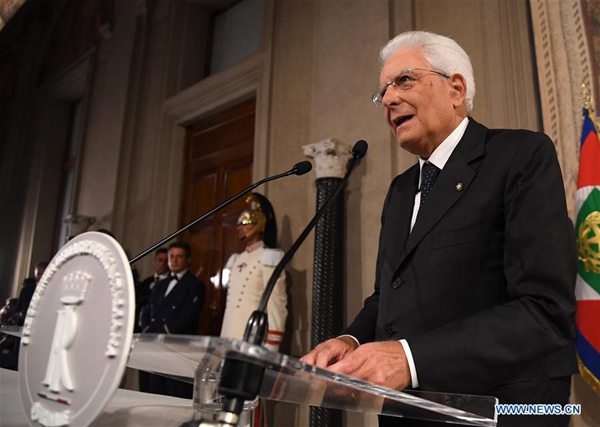 The coalition government forged between far-right League and anti-establishment Five Star Movement in June 2018 ended on Aug. 20 with the resignation of Prime Minister Giuseppe Conte.

Mattarella would begin on Tuesday afternoon by meeting the speakers of lower house and senate, the president's office said in a statement.

In the same day, he would consult former president Giorgio Napolitano -- now a senior senator -- and continue with the leaders of minor parties sitting in both houses.

Consultation would continue on Wednesday, with talks directly involving the leaders of all of the major parties.

Mattarella will begin with center-left Democratic Party (PD) at 4 p.m. local time, followed by center-right Forza Italia (FI), far-right League, and will conclude with anti-establishment Five Star Movement (M5S) at around 7 p.m., according to the official schedule.

This would be the last opportunity for parties to show the president their will in favor of a possible political solution, in order to form an alternative government and avoid the risk of snap elections in the next months.

Meanwhile on Monday, the leaders of Five Stars and PD -- Luigi Di Maio and Nicola Zingaretti, respectively -- met shortly in the Italian capital.

In the last days, both the M5S and the PD have held intense discussions among their own lawmakers and members on whether to overcome the respective distrust -- after harshly attacking each other for years -- to avoid the country fresh elections.

Both confirmed last week they were ready to negotiate on a possible common government program, and president Mattarella decided to give them more time, after the first round of consultations launched on Aug. 21-22.

The resignation of Prime Minister Giuseppe Conte on Aug. 20 was due to the decision of League leader and hardline Interior Minister Matteo Salvini to pull the plug on the government earlier in August in a bid to trigger snap elections.