The movement was founded over lunch by four former roommates, all in their 30s, who were fed up with the abrasive, nationalist rhetoric of the League’s leader.

Using one of Salvini’s strengths — a social media campaign — the friends swiftly organized a gathering earlier this month in Bologna’s central Piazza Maggiore, as an alternative to Salvini’s electoral campaign event in town ahead of key regional elections in January.

They were expecting 6,000 people to show up in the pouring rain.

Instead, 15,000 packed the piazza like, well, sardines, and a new political movement was born.

It has quickly spread across the country, gaining thousands of followers on social media and seems to have caught the media-savvy Salvini off guard.

“We wanted to fill a vacuum left by traditional politics, which has surrendered to a violent language of hatred and fear,” one of the founders, 32-year-old Mattia Santori, told The Associated Press in an interview. “We found out that vacuum is much wider than expected.”

The movement —“Sardine” in Italian — which is clearly inspired by center-left ideas, refuses to embrace parties’ flags, claiming to be a non-partisan initiative with no ambitions to become a political party. But left-wing forces, especially the struggling Democrats, have clearly seen their potential.

The movement has an anti-populist agenda of ideas, projects and concrete plans centered on “human beings” They push for "inclusive" social laws, pro-migration and pro-environment measures. Their movement often crosses path with the youth environmental protest group Fridays for Future, and they have organized joint events.

According to a recent survey by pollster Index Research, more than 40% percent of Italians think that the Sardines now represent "Salvini's most dangerous enemy," while the center-left Democratic Party is trusted by only 14% as the possible alternative to right-wing populism.

"We are already hundreds of thousands and we are ready to tell you to stop," the Sardines’ manifesto – published on Facebook -- tells populists, threatening to "spread this message until you feel seasick.”

Salvini, a social media star, at first snubbed the movement, then mocked it, announcing on Twitter that he prefers "kittens to sardines, and kittens eat sardines when they're hungry."

The new movement differs from the anti-establishment 5-Star Movement, which was also born in revolt against the old political powers. It has no designated leader, and it is openly anti-populist, while the 5-Stars have strong populist roots and a charismatic leader — former comedian Beppe Grillo — who sets the agenda.

The surprising success of the Sardines' first demonstration in Bologna was followed by another protest in the smaller city of Modena, where an estimated 7,000 gathered to protest against Salvini’s populist messages. The square was packed with Italians of all ages, waving Sardines signs and singing the anti-fascist resistance anthem “Bella Ciao.”

Videos and images of the protests went viral on social media, and a growing number of activists started proposing new events across the country. In coming weeks, new flash mobs are planned in a dozen more Italian cities, from Naples to Milan.

A nationwide demonstration is also planned for Dec. 14 in Rome, where organizers hope that up to 1 million Sardines will pack the city’s central Piazza San Giovanni.

The Sardines are shaking Italy’s fluid political environment, where a weak ruling coalition – formed last summer by the center-left Democrats and 5-Star Movement to block Salvini’s rise – faces what appears to be an unstoppable right-wing wave.

Eight Italian regions will vote in the 2020 regional elections, including the leftist stronghold region of Emilia Romagna — where Salvini’s League showed surprising strength in 2018 national elections.

Recent polls suggest that the rise of the League — and its center-right alliance with Silvio Berlusconi’s Forza Italia and Giorgia Meloni’s far-right Brothers of Italy — could beat the left-wing parties that have run some of those regions for decades.

But despite Salvini’s disdain, the Sardines are gathering strength. And similar initiatives are being launched by Italians in New York and Berlin, against all forms of populism.

“We’ve been overwhelmed with requests, in Italy and abroad, to organize new events,” Santori said. “Our aim was to wake people up and release this new energy. Now it’s up to politicians to avoid it being wasted.”

Analysts note that other past grassroots initiatives – such as the Italian Girotondi, joined by famous director Nanni Moretti – have failed to convert popularity into a concrete political alternative.

“The Sardines demonstrated they were able to mobilize people and bring them back to piazzas with a nonviolent message. The big question is now what they’ll do next,” said Massimiliano Panarari, political analysts at Rome’s LUISS university.

“Their political potential is wide, as their votes should naturally converge toward leftist parties,” Panarari added. “Their followers maybe don’t have a specific party affiliation, but they have a common enemy and they’ll vote against him.” 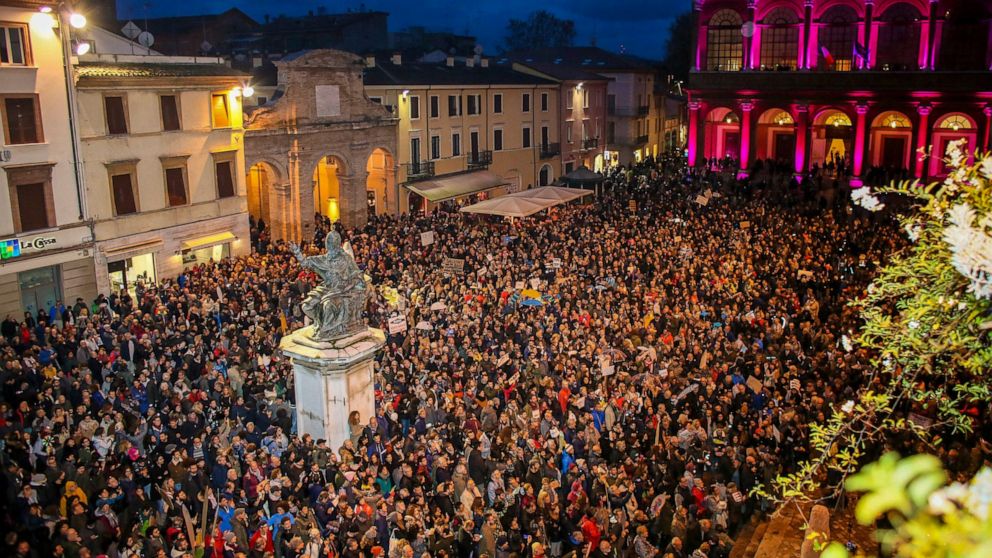