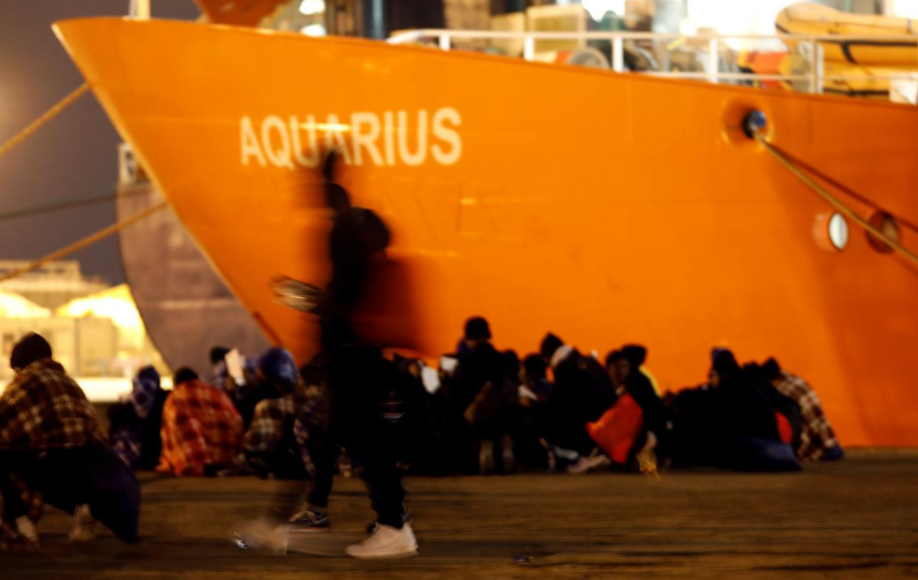 Migrants disembark from the MV Aquarius, a search and rescue ship run in partnership between SOS Mediterranee and Medecins Sans Frontieres, after it arrived in Augusta on the island of Sicily, Italy, January 30, 2018. (File photo: Reuters)

Italy will refuse to let a humanitarian ship carrying more than 600 migrants dock at its ports and has asked the Mediterranean island of Malta to open its doors to the vessel, government officials said on Sunday.

Malta brushed off the request, saying it had nothing to do with the rescue operation, opening the prospect of a diplomatic rift between the two European Union allies.

The move by Italy’s new interior minister, Matteo Salvini, who is also head of the far-right League, represents an opening gambit to make good on his electoral promises to halt the flow of migrants into the country.

“Malta takes in nobody. France pushes people back at the border, Spain defends its frontier with weapons,” Salvini wrote on Facebook. “From today, Italy will also start to say no to human trafficking, no to the business of illegal immigration.”

More than 600,000 migrants have reached Italy by boat from Africa in the past five years. Numbers have dropped dramatically in recent months, but rescues have increased in recent days, presenting Salvini with his first test as minister.

“My aim is to guarantee a peaceful life for these youths in Africa and for our children in Italy,” Salvini said, using the Twitter hashtag “We are shutting the ports”.

However, Salvini does not have authority over the ports and it was not immediately clear if his line would hold. The mayor of Naples, who has repeatedly clashed with the League leader, said he would welcome in the humanitarian boat.

“Naples is ready, without funds, to save lives,” he said.

European charity SOS Mediterranee said on Twitter earlier on Sunday that its rescue boat Aquarius had taken on board 629 migrants, including 123 unaccompanied minors, 11 other children and seven pregnant women.

The charity said the group of mainly sub-Saharan Africans were picked up in six different rescue operations off the coast of Libya and included hundreds who were plucked from the sea by Italian naval units and then transferred to the Aquarius.

“The boat is now heading north toward a secure port,” SOS Mediterranee tweeted on Sunday without specifying its destination, though virtually every such migrant boat over the past five years has ended up in Italy.

Its route north will take it past Malta, and the Italian government said its port authorities had written to the small island state asking it to let the Aquarius dock there.

“The island cannot continue looking the other way when it comes to respecting international conventions,” said the statement, which was signed by Salvini and Transport Minister Danilo Toninelli, who is nominally in charge of the ports.

Malta said the rescue operations took place in international waters off Libya and were coordinated by Italy.

“Malta is neither the competent nor the coordinating authority in this case. Malta will observe prevailing laws,” its government said in a brief statement.

SOS Mediterranee spokesperson Mathilde Auvillain said the Aquarius had received orders to head north after a series of sea rescues and was now was awaiting “definitive instructions”.

“Our objective is the disembarkation in a port of safety of the 629 people now on board the Aquarius - some we rescued yesterday night in difficult conditions,” she said.

Charity boats operating off the Libyan coast have played an increasingly important role in rescuing migrants who often put to sea in flimsy inflatable boats not designed for the open sea.

The United Nations estimates that at least 500 people have died in 2018 trying to cross the central Mediterranean, following some 2,853 fatalities last year.

Salvini has accused the charities of acting as a “taxi service” for the migrants. On Friday, he called on NATO to help Italy defend its southern shores.