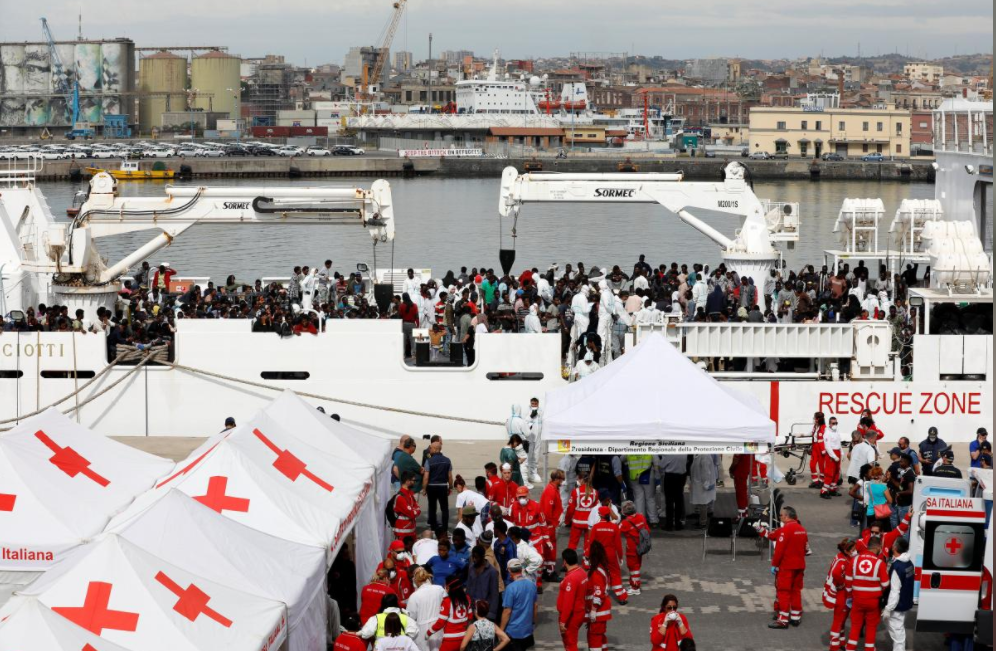 Italian Economy Minister Giovanni Tria also canceled a meeting with his counterpart in Paris, a day after French President Emmanuel Macron said Rome had acted with “cynicism and irresponsibility” by closing its ports to a migrant ship.

“We have nothing to learn about generosity, voluntarism, welcoming, and solidarity from anyone,” Italy’s Interior Minister Matteo Salvini, told the Senate.

Salvini, who is also deputy premier and the leader of the anti-immigrant League party, called on France to apologize and said he was not prepared to take criticism from a country which regularly stopped migrants on their shared border.

France said it has received no formal request from Italy for an apology, and said it believed a planned meeting between Macron and Italian Prime Minister Giuseppe Conte in France on Friday would go ahead.

Visiting western France, Macron initially did not respond to questions on the issue but later told reporters: “We must never give in to emotions, which some people manipulate.”

The row is centered on the charity ship Aquarius, which both Italy and Malta refused to let dock at their ports. It was carrying 629 migrants and is now heading to Spain, which offered safe harbor, escorted by two Italian ships.

France was not completely alone in its criticism.

How Europe should share the responsibility of handling migrants trying to get into the bloc from war zones and poor countries, largely across Africa and the Middle East, remains a vexed question.

Many states have fallen short of their pledge, made in 2015, to take some asylum seekers from Italy and Greece and share the cost of their care.

Salvini’s League scored its best-ever result in March national elections, partly on pledges to deport hundreds of thousands of migrants and halt the flow of newcomers, and has formed a coalition with the anti-establishment 5-Star Movement.

More than 1.8 million have entered Europe since 2014, and Italy is now sheltering more than 170,000 asylum seekers, as well as an estimated 500,000 unregistered migrants.

France sought to take a more conciliatory tone on Wednesday. Foreign Ministry spokeswoman Agnes von der Muhll said it was “fully aware of the burden that the migration pressure is placing on Italy” and that it was committed to cooperating with Rome on immigration.

Economy Minister Tria spoke with his French counterpart after cancelling his meeting, a French finance ministry official said, and both agreed to reschedule their meeting in coming days.

But Italy’s foreign minister, Enzo Moavero, kept up the barrage by telling a French envoy that Macron’s comments were “unjustifiable” and had compromised bilateral relations.

Salvini told the Senate he was open to a possible “axis” with Germany and Austria on immigration ahead of a key EU summit at the end of June that will, in part, consider changes to EU asylum law to better share the burden of incoming migrants.

“With my German and Austrian colleagues... we will propose a new (immigration) initiative,” Salvini said, adding that it would apply both to the EU’s external borders and to how the bloc’s countries manage migrants internally.

German Chancellor Angela Merkel has faced criticism from her own conservative party for her open-doors migrant policy, adopted in 2015, which also fueled a rise in support for the right-wing Alternative for Germany (AfD).

On Wednesday she said discussions between Italy, Germany and Austria were about finding “a Europe-wide solution... Therefore I think that there must be many such kinds of cooperation, not just in this one direction”.

As politicians have dithered or traded blame, refugees have continued to arrive.

On Wednesday morning, an Italian coast guard vessel with 937 migrants and two bodies aboard docked in Catania, Sicily, as the Aquarius headed into increasingly rough seas on its way to Valencia, where it is due to arrive on Saturday.

A Dutch-flagged humanitarian ship, the Sea Watch 3, was called by a US Navy vessel to take on board 41 survivors and 12 bodies recovered after a shipwreck on Tuesday.

However, the Sea Watch is still waiting to pick them after asking for a written guarantee that it will be allowed to dock in an Italian port.