WORLD Italy threatens to send stranded migrants 'back to Libya'

Italy threatens to send stranded migrants 'back to Libya' 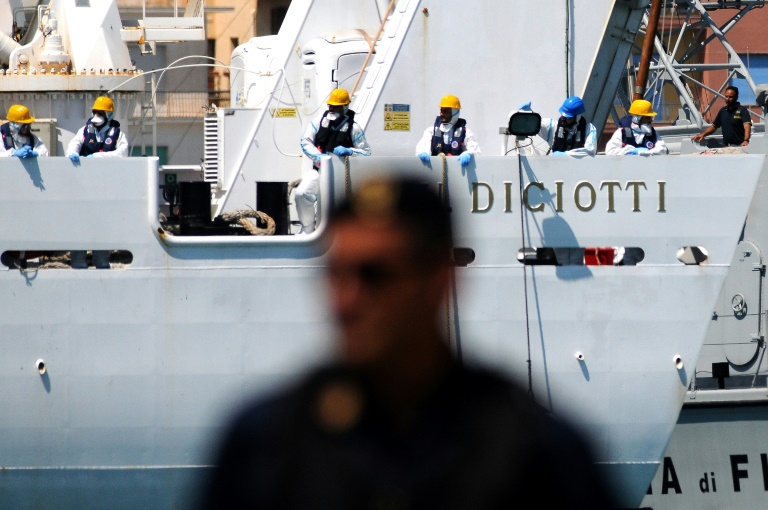 177 people have been sat off the coast of the Italian island of Lampedusa since August 16, 2018 after being saved by the coastguard's Diciotti vessel, seen in July 2018, and Italy is battling with Malta over who should take them in. (Photo: AFP)

Italy's far-right interior minister threatened Sunday to send "back to Libya" nearly 180 people stranded for three days on an Italian coastguard ship if the EU did not step in to resolve another migrant row with Malta.

The 177 people have been sat off the coast of the Italian island of Lampedusa since Thursday after being saved by the coastguard's Diciotti vessel, and Italy is battling with Malta over who should take them in.

"Either Europe decides to seriously offer Italy some concrete help, beginning with for example the 180 immigrants on board the Diciotti ship, or we will be forced to do what will definitively end the human traffickers' business. That means taking the people saved in the sea back to Libya," Salvini said in a statement.

Numerous human rights abuses have been reported in detention centres that hold migrants hoping to make the perilous crossing of the Mediterranean and arrive in Europe.

The Diciotti has been stood off Lampedusa while Italy's populist government, in power since June, demanded that Malta take in the passengers.

Earlier on Sunday the Maltese government, which on Wednesday allowed 141 migrants aboard the Aquarius vessel to dock after an agreement to distribute them to a number of European countries, underlined its refusal of Italy's demands.

Prime Minister Joseph Muscat said that the migrants’ boat was not in distress and that they also refused help, while interior minister Michael Farrugia wrote on Twitter that "the only solution" was for the people, saved in waters between the countries, to be taken to Lampedusa or another Italian port.

Farrugia added that the Diciotti picked up the migrants inside the Maltese search and rescue area "without any coordination from the competent RCC (Rescue Coordination Centre), just to stop them arriving in Italian waters".

"An interception of a boat that exercises its right to free navigation in the high seas is not considered a rescue operation," said Farrugia.

Malta's refusal to take in the migrants has infuriated the Italian government, already angered by an operation that Salvini says was carried out by the Italian coastguard without the approval of Rome.

"Malta's behaviour is once again unqualifiable and deserves sanction," Italian Minister of Transport Danilo Toninelli said on Twitter on Sunday.

"The EU needs to step forward and open its ports to solidarity, otherwise it has no reason to exist."

The spat between Italy and Malta is the second in just over a month. It follows the battle over 450 people rescued from a fishing ship and taken aboard two EU border agency vessels who were eventually allowed to disembark in Italy after five European countries agreed to take 50 each.

In June, Malta was forced to take the German NGO boat Lifeline carrying over 234 migrants, just days after a standoff between the island nation and Italy led to the French rescue ship Aquarius being diverted and taking 630 people to Spain.