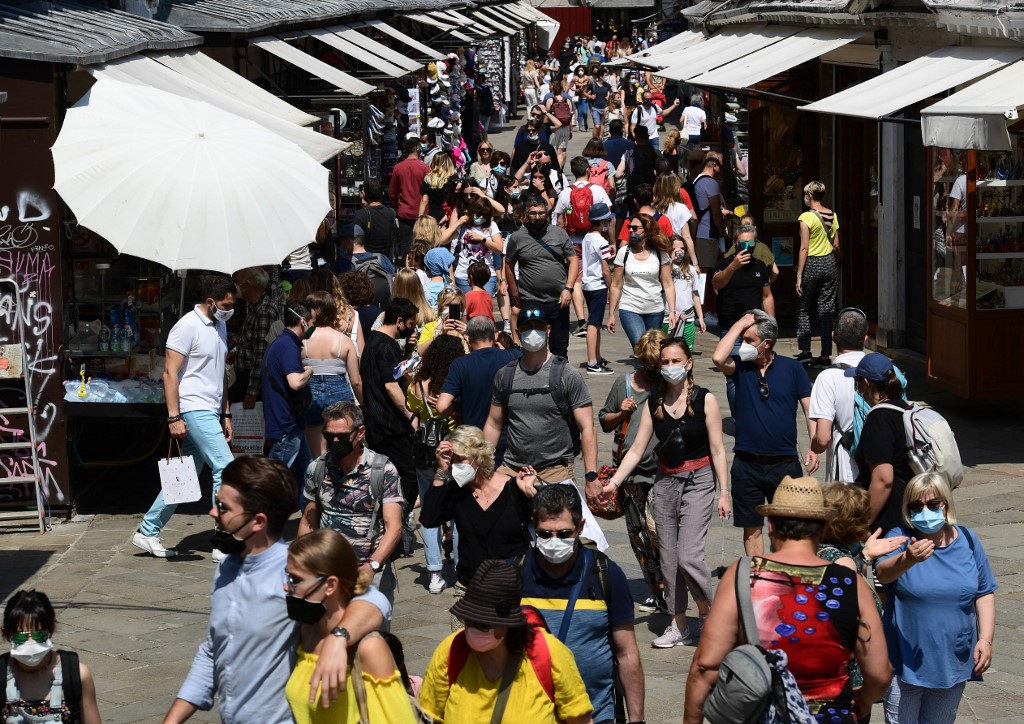 Tourists stroll across the Ruga dei Oresi shopping street near the Rialto bridge in Venice on June 05, 2021. (File photo: AFP)

ROME, June 22 (Xinhua) -- As of next week, Italy is preparing to lift the outdoor face mask mandate as the country's main COVID-19 indicators appear to have stabilized.

The decision was confirmed by Health Minister Roberto Speranza on Tuesday after the new Scientific Technical Committee (CTS) advising the government on the pandemic emergency gave its green light the previous day.

"From June 28 on, we are going to lift the obligation to wear masks outdoors in the (low risk/low restriction) white zone, but always complying with the precautionary recommendations issued by the CTS," Speranza wrote on his official Facebook account.

The wearing of face masks has been mandatory indoors and outdoors across Italy throughout the whole pandemic period, and the rule was reinforced last October when the country faced a second wave of infections.

In line with the CTS's recommendations, starting next Monday, people will still be required to wear face masks in all indoor public spaces, in hospitals, on public transport, and during large gatherings outdoors.

Also next Monday, 19 of the country's 20 regions will become "white zones."

The spread of COVID-19 has slowed down and the number of hospitalizations and deaths has also been on the decline in Italy.

"Until we have zero deaths in each Italian region, our battle against the virus will remain unaccomplished," Speranza stressed during a meeting on public health held at the National Council for Economics and Labor on Tuesday.

He reiterated that vaccines remain a key weapon against the virus. To date, over 49 million COVID-19 vaccine doses have been administered in the country of 60 million, and over 16 million people are now fully immunized, according to the latest government data.

Meanwhile, a limited outbreak caused by the Delta virus variant was confirmed on Tuesday in the area between the northern cities of Piacenza and Cremona, the ANSA news agency reported citing local sources.

Twenty-four people tested positive for the variant. Ten of them were employees of two companies based in a logistics hub near Piacenza. All these infections have been detected by the local public health department over the past six days, and all the infected people (none in critical condition) are currently in isolation, according to ANSA.