WORLD Jackson sworn in as US Supreme Court justice

Jackson sworn in as US Supreme Court justice 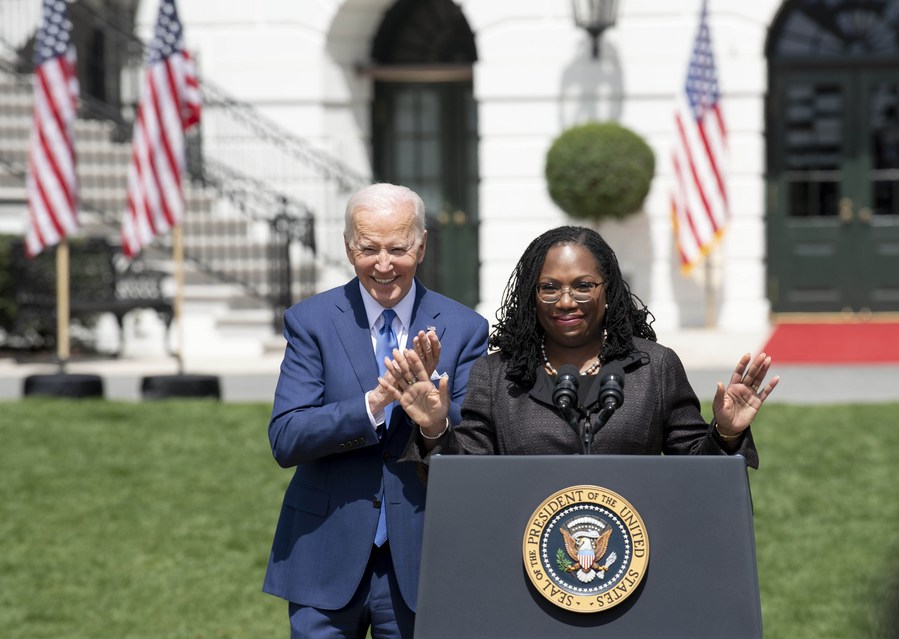 Ketanji Brown Jackson was sworn in at noon on Thursday to formally become an associate justice of the U.S. Supreme Court, making her the nation's first African American woman to serve in that role.

Chief Justice John Roberts administered the constitutional oath for Jackson while Associate Justice Stephen Breyer, whom she clerked for, administered the judicial oath, in a ceremony before a small gathering of her family at the Supreme Court on Capitol Hill.

Jackson, in a statement, said that she will administer justice "without fear or favor."

The ceremony was streamed live on the homepage of the Supreme Court's website. A formal investiture ceremony will take place at a later date, according to the court.

U.S. President Joe Biden nominated Jackson, 51, to succeed Breyer in late February, and Jackson was confirmed by the Senate in a 53-47 vote in April. It was one of Biden's major promises to fill a potential Supreme Court vacancy with an African American woman.

The Supreme Court is the final appellate court of the U.S. judicial system, with the power to review and overturn lower court decisions, and is also generally the final interpreter of federal law, including the country's constitution.

Since the Supreme Court was established in the United States in 1789, 116 justices have been confirmed to the bench. Of them, 108 are white men and only six are women, including Jackson. The justices have life tenure and can serve until they die, resign, retire, or are impeached and removed from office.

Jackson served more than eight years as a judge on the U.S. District Court for the District of Columbia before being elevated to the U.S. Court of Appeals for the D.C. Circuit in June 2021.

Court watchers believe Jackson is expected to vote very similarly to Breyer, a liberal, and her ascension won't change the Supreme Court's ideological balance, in which conservatives have a 6-3 majority over liberals, but is likely to change its dynamic.

Breyer and two other liberal justices dissented in an opinion. "With sorrow - for this Court, but more, for the many millions of American women who have today lost a fundamental constitutional protection - we dissent," they wrote.

In the majority opinion, Justice Samuel Alito, a conservative, wrote that "Roe was egregiously wrong from the start," and "its reasoning was exceptionally weak, and the decision has had damaging consequences."

The Supreme Court has ruled this term on cases involving a series of major issues, such as guns, immigration, and emissions, in addition to abortion.