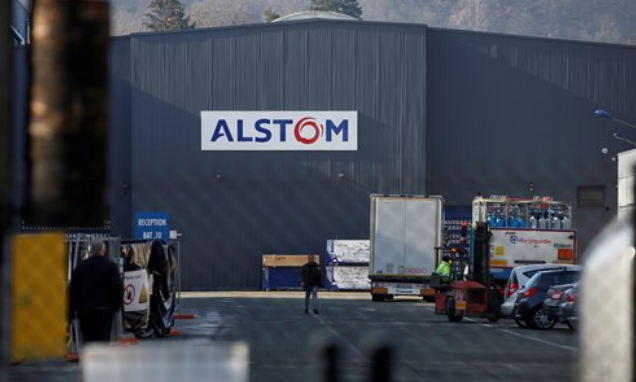 The logo of Alstom is seen on the company's TGV high-speed train factory in Belfort, France on February 6, 2019. (Photo: VCG)

When former Alstom manager Frederic Pierucci was suddenly handcuffed after arriving in New York on an April night in 2013, it marked the start of a years-long nightmare.

The executive starts his book - Le Piege Americain, (The American Trap) - with this scene, which is reminiscent of the recent arrest of Chinese giant Huawei's chief financial officer Meng Wanzhou, who is now facing extradition to the US to face charges of "violating US sanctions on Iran."

Pierucci was not released from prison until September 2018. Alstom, his business giant that once dominated the world's electricity, energy and transport industries, has been "dismantled" by the US.

In 1998, Alstom ranked second in the world in the electric power transmission and distribution industry. It grew in strength after merging with Gegelec Controls, a leader in electrical engineering contracting and industrial control systems.

At the time, Alstom had an annual turnover of over $16 billion and 110,000 employees. With businesses in more than 60 countries and regions, the company became a major force in the industries of energy, transportation, and industrial equipment. It was said that one in four light bulbs around the world was powered by Alstom's technology.

Alstom's products were used in various energy and power transmission and transformation equipment in China during that time, including those used in the Three Gorges Dam project. Alstom's strength, however, posed a direct challenge to another giant in the industry, General Electric.

Pierucci, arrested by FBI agents as soon as he got off the plane, never expected to be kept in a Rhode Island high-security prison for violent crimes. He was put in orange prison clothes, with chains on his chest and shackles on his hands and feet.

He did not even tell his wife about his arrest, believing that he would be home for the weekend with his family. Little did he know that at one point, he would spend more than 250 days without seeing direct sunlight or breathing outside air.

He was given two choices in a plea hearing three months later. One way was to plead innocent and stand trial under US law. This was a risky choice, as prosecutors in the case were seeking a sentence of 15 to 19 years in prison. He was told that preparations for the trial would take at least three years and cost millions of dollars, as Economist reported.

The alternative was to plead guilty and cooperate with US authorities in exchange for just a few months in prison.

In July 2013, the physically and mentally exhausted Pierucci admitted to bribing Indonesian officials.

Despite the confession, he was held for another year, and was then released on bail for three years, from June 2014 to October 2017. Since then, he has been back in jail for another year before his release in September 2018.

Pierucci calls himself an "economic hostage," as he was in no doubt that the ultimate objective of the Americans was acquisition of Alstom, GE's biggest rival.

It is a book about the "underground economic war," Pierucci wrote in his introduction.

Alstom has been under investigation by US authorities since 2010 to find out how it was "unfairly" awarded billions of dollars in contracts outside the US.

Prosecutors said the company paid tens of millions of dollars to secure $4 billion in contracts for projects for state-owned companies in countries like Bahamas, Egypt and Indonesia, reported Bloomberg.

Some of the bribes, including those Mr Pierucci had been involved with in Indonesia from 2002, had been paid by an American subsidiary, and Alstom had financed itself partly in the US, giving American authorities justification to pursue Alstom in France and to punish it with a fine far greater than European corruption statutes might have levied, the Economist reported.

By Spring in 2014, in an effort to keep up the pressure on Alstom to cooperate with the Department of Justice (DoJ), US authorities arrested at least three more of Pierucci's former colleagues.

Court documents suggest that prosecutors ended up with 49 hours of covertly taped conversations inside Alstom, courtesy of executives-turned-informants, who became an important weapon in their bid to bring Alstom to its knees.

In December 22, 2014, Alstom pleaded guilty to charges that their US subsidiary had engaged in overseas bribery, and agreed to pay $772 million in fines. It was the largest criminal penalty for an overseas enterprise ever imposed under US anti-bribery laws.

The huge fines forced the firm to sell its assets.

Fierucci claims that Alstom's collapse was brought about by the US step by step, and was initiated by American giant and rival GE's keen interest in acquiring Alstom's power business.

Executives of Alstom at the time claimed that they tried to make a deal with GE soon after Pierucci's guilty plea in July 2013, and felt less legal pressure from the US soon after an agreement seemed likely. First, the arrest of executives was halted, and secondly, Pierucci's long pending bail application was finally approved as soon as Alstom executives signed off on the sale of the company's assets to GE, the Economist revealed.

GE had an advantage at the legal and economic level over other overseas companies who had shown interest in purchasing Alstom's assets, such as Siemens in Germany and Mitsubishi in Japan. These overseas rivals abandoned their attempts on seeing the potential legal liability and huge fines that they would have to take over as stipulated by the DoJ.

As a result, French and EU authorities approved the deal, and Alstom was finally "dismembered" by the Americans.

Over the past decade, US law and regulatory authorities have taken extraterritorial legal action against many large foreign companies. When big companies are accused of serious misconduct outside the US, usually corruption or sanctions violations, paying large fines (sometimes more than $1 billion) becomes the only way out.

Threatened by the long arm of American jurisdiction, foreign executives are constantly burdened by anxiety. What may seem like fair business competition with American companies could suddenly see them taken into custody by US authorities.

By comparison, only five US companies have been fined a total of only $2 billion.

Pierucci says that the US judiciary's clear bias toward foreign companies compelled him to break his silence and tell all. The story shows us how the US abuses its public power and uses state violence to pave the way directly and indirectly for American businesses to expand and compete around the world.