Jaishankar-Blinken meeting will 'include topics targeting China,' but have little real impact: scholars 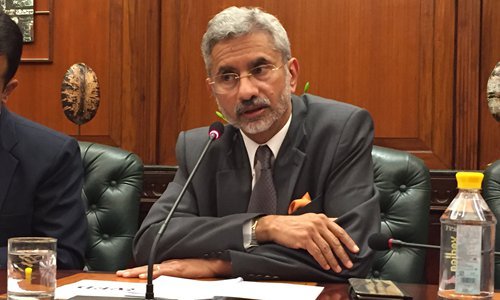 Indian External Affairs Minister Subrahmanyam Jaishankar is reportedly planning to have discussions with the US Secretary of State Antony Blinken during his visit to the US. Their discussions will "definitely include topics targeting China," but may have little real impact on this biggest neighbor of India, Chinese academics told the Global Times on Friday.

Jaishankar, who landed in New York on May 23, is on a week-long trip to the US, which marks the first visit of a high-level Indian minister since President Biden took office in January.

Jaishankar and Blinken are set to discuss a broad range of issues including COVID-19 relief and "efforts to strengthen Indo-Pacific cooperation through the Quad," according to Indian media. Topics that may involve China, such as the border issue and the resilient global supply chains will also be parts of the discussion, Hindustan Times reported on May 21.

Following the Supply Chain Resilience Initiative (SCRI) it formally launched with its Quad allies Australia and Japan in April, India may attempt to further challenge China's position in international industrial chains through involving the US in, according to observers.

Nonetheless, India is unlikely to directly address China in its public [joint] statement after the discussion with the US, even if there will be such a statement, estimated Qian Feng, director of the research department at the National Strategy Institute at Tsinghua University. Instead, India is likely to be deliberately vague on China-related topics in its official statements, Qian said.

"India avoids openly provoking China, which is otherwise not in its own interest," Qian told the Global Times on Friday, saying India's industries and market are depended on China especially amid the COVID-19 pandemic.

China has offered India COVID-19-fighting supplies as a goodwill gesture, Qian said. "I don't think the Indian authority including Jaishankar himself is willing to worsen China-India relationship in this particular time," he added.

The discussion, therefore, will not result in substantive policies or action targeting China, although it is the trend that India is moving closer to the US in its policies, Qian noted.

Jaishankar's US visit shows India's geopolitical ambition in achieving strategic convergence and coordination with the US and suppressing China, observers said. On Monday local time, after a session with India's team in the United Nations in New York, Jaishankar wrote on Twitter that "confident that India will continue to shape the big debates of our times," reported India Today.

It is unadvisable for Indian officials to become preoccupied with expanding its international influence and pursing geopolitical goals when its domestic epidemic situation remains critical, international relations experts said. Earlier this month, the entire Indian delegation led by Jaishankar to the G7 summit was quarantined in London after two of its delegates tested positive for COVID-19, becoming a "laughing stock of the international community," experts said.