Jakarta on flood alert after heavy rain hits other cities 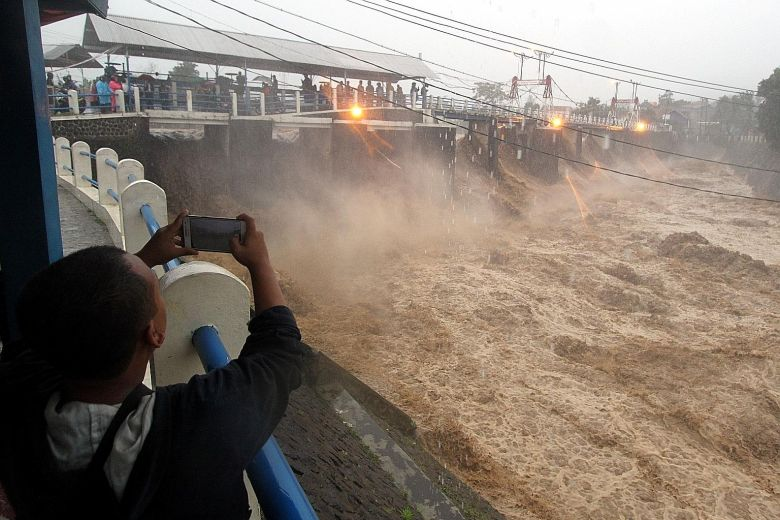 Torrential rain has caused floods and landslides in satellite cities around the Indonesian capital, with the authorities warning that floods could hit Jakarta late yesterday after being forced to open sluice gates on a major upstream reservoir.

Dramatic TV footage showed fast-running rivers of muddy water gushing down roads, bringing down trees and even some villas in the hilly areas around Jakarta, Reuters reported.

The authorities were forced to release water from a reservoir upstream in the city of Bogor as water levels prompted the highest alert.

"Some residents have been evacuated and the potential for rain in the greater Jakarta area remains high," BNPB spokesman Sutopo Purwo Nugroho said in a statement.

He added that the police and military personnel were working with volunteers to deal with the impact of the floods.

In a separate incident, a 20m stretch of an underpass retaining wall near Jakarta's Soekarno-Hatta airport collapsed yesterday, burying at least one car with two female passengers, said the police. The women were alive and communicating with rescuers, tvOne reported.

Video footage from the scene showed a car crushed under concrete rubble and earth, with rescuers trying to reach the victims.

"I urge residents near the river... to be alert," Mr Baswedan told reporters, Reuters said.

The authorities have in the past few years sought to reduce low-lying Jakarta's vulnerability to flooding during the rainy season.

More than 50 people died in 2007 in one of the capital's deadliest floods, and five years ago, much of the centre of the city was inundated after canals overflowed.

Top Image: Water gushing through after sluice gates at a reservoir in Bogor, West Java, were opened yesterday. The authorities were forced to open the gates after heavy rain caused floods and landslides in cities surrounding Jakarta. (PHOTO: REUTERS)