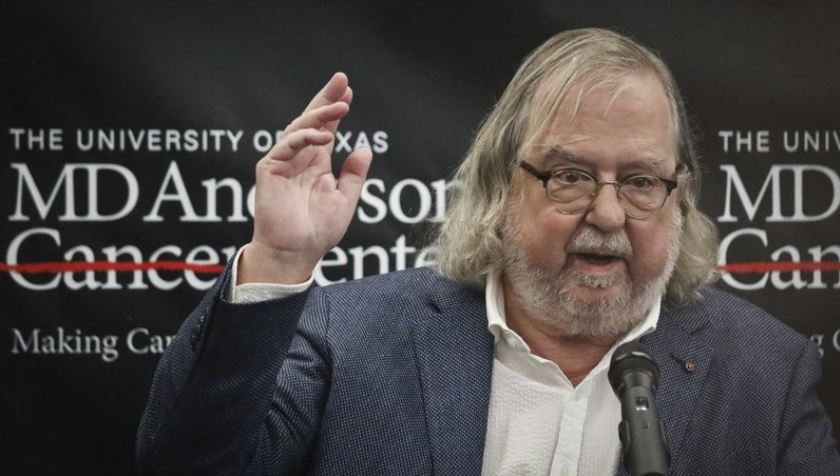 James Allison, one of the 2018 Nobel Prize winners for medicine, speaks during a press conference, Monday, Oct. 1, 2018, in New York. Allison and Tasuku Honjo won the Nobel Prize in medicine on Monday for discoveries that help the body marshal its cellular troops to attack invading cancers. (Photo: AP/Bebeto Matthews)

Researchers from the United States and Japan won the Nobel Prize in medicine on Monday for discoveries that help the body marshal its cellular troops to attack invading cancers. One cancer doctor said “an untold number of lives ... have been saved by the science that they pioneered.”

James Allison of the University of Texas and Tasuku Honjo of Kyoto University will share the 9-million-kronor ($1.01 million) prize for 2018. Their parallel work concerned proteins that act as brakes on the body’s immune system.

Their research, which has led to drugs that release the brakes on the immune system, constitutes “a landmark in our fight against cancer,” said the Nobel Assembly of Sweden’s Karolinska Institute, which selects the winners of the prestigious award.

The discoveries by Allison, 70, and Honjo, 76, “absolutely paved the way for a new approach to cancer treatment,” Dr. Jedd Wolchok, chief of the melanoma and immunotherapeutics service at the Memorial Sloan Kettering Cancer Center in New York, told The Associated Press.

He said the idea of releasing the brakes on immune system cells has led to drugs for the skin cancer melanoma and for cancers of the lung, head and neck, bladder, kidney and liver. Just last week, such a drug was approved for treatment of another kind of skin cancer called squamous cell cancer, he said.

Wolchok said “an untold number of lives ... have been saved by the science that they pioneered.”

The approach to cancer treatment that was honored with this year’s Nobel was used to treat former U.S. President Jimmy Carter, who was diagnosed in 2015 with melanoma, which had spread to his brain.

One of Carter’s treatments was a drug that blocked the immune-cell “brake” studied by Honjo. Carter announced in 2016 that he no longer needed treatment.

Although the concept of using the immune system against cancer arose in the 19th century, initial treatments based on the approach were only modestly effective.

“Everybody wanted to do chemotherapy and radiation. The immune system was neglected because there was no strong evidence it could be effective,” said Nadia Guerra, head of a cancer laboratory at Imperial College London.

Allison’s work, much of it done at the University of California-Berkley, changed that by proving the immune system could identify tumor cells and act against them.

“It’s like your body uses your own army to fight cancer,” she said.

Allison studied a known protein and developed the concept into a new treatment approach, while Honjo discovered a new protein that also operated as a brake on immune cells.

“I’m honored and humbled to receive this prestigious recognition,” Allison said in a statement released by the university’s M.D. Anderson Cancer Center in Houston, where he is a professor.

“A driving motivation for scientists is simply to push the frontiers of knowledge. I didn’t set out to study cancer, but to understand the biology of T cells, these incredible cells that travel our bodies and work to protect us,” he said.

At news conference later Monday in Kyoto, Honjo said what makes him most delighted is when he hears from patients who have recovered from serious illnesses because of his research.

Honjo, an avid golf player, said a member of a golf club once walked up to him suddenly, thanking him for the discovery that treated his lung cancer.

“He told me, ‘Thanks to you I can play golf again.’ ...That was a blissful moment. A comment like that makes me happier than any prize,” he said.

The American Cancer Society’s chief medical officer says he and colleagues gave a celebratory toast to Allison at a party on Friday — days before the announcement of the Nobel Prize in Medicine — because they agreed this could be his year.

Dr. Otis W. Brawley, a close friend of Allison’s, said the Nobel committee usually waits about ten years to make sure a scientific discovery “sticks as being really important.”

He said Allison’s work a decade ago “really opened up immunotherapy” as a fifth pillar of cancer treatments, after surgery, radiation, chemotherapy and precision therapy.

“The discovery of Jim Allison led to the first drug that routinely caused patients with a metastatic disease — melanoma — - to go into complete remission,” he said.

Allison’s drug, known commercially as Yervoy, became the first to extend the survival of patients with late-stage melanoma. In a statement Monday, he urged more support for basic science research.

Allison said scientists need to better understand “how these drugs work and how they might best be combined with other therapies to improve treatment and reduce unwanted side effects. We need more basic science research to do that.”

“It’s a great emotional privilege to meet cancer patients who’ve been successfully treated with immune checkpoint blockade. They are living proof of the power of basic science,” he added.

Allison’s and Honjo’s prize-winning work started in the 1990s and was part of significant advances in cancer immunotherapy. Such treatment is also called “checkpoint therapy,” a term that inspired the name of the Checkpoints, a musical group of cancer researchers for which Allison plays harmonica.

“In some patients, this therapy is remarkably effective,” Jeremy Berg, editor-in-chief of the Science family of journals, told the AP. “The number of different types of cancers for which this approach to immunotherapy is being found to be effective in at least some patients continues to grow.”

Therapy developed from Honjo’s work led to long-term remission in patients with metastatic cancer that had been considered essentially untreatable, the Nobel Assembly said.

In other Nobel Prize announcements, the physics prize will be announced Tuesday, followed by chemistry on Wednesday and the Nobel Peace Prize on Friday. The economics laureate, which is not technically a Nobel but is given in honor of Alfred Nobel, the prizes’ founder, will be announced next Monday.

No Nobel Literature Prize is being given this year because the Swedish Academy, the body that choses the literature winner, has been in turmoil after sex abuse and financial scandal allegations. The academy hopes to award both the 2018 prize and the 2019 literature prize next year.