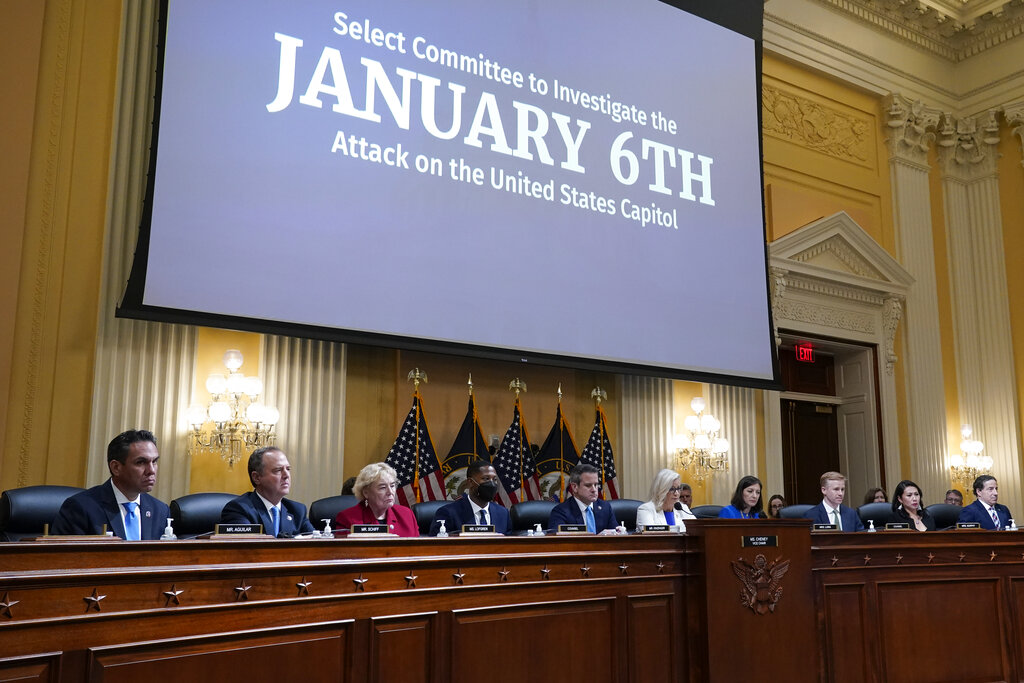 he House select committee investigating the Jan. 6 attack on the U.S. Capitol holds a hearing at the Capitol in Washington, Thursday, July 21, 2022. (Photo: AP)

The House committee investigating the Jan. 6 attack on the U.S. Capitol announced Tuesday that it had postponed a hearing scheduled for Wednesday as a hurricane hurtled toward the Florida coast.

The committee had planned to hold what was likely to be its final investigative hearing Wednesday afternoon, but members decided at the last minute to delay it as it became clear that Hurricane Ian was churning on a collision course toward Florida, where it was expected to strengthen into a catastrophic Category 4 storm.

"We're praying for the safety of all those in the storm's path," committee chairman Bennie Thompson, D-Miss., and vice chair Liz Cheney, R-Wyo., said in a statement Tuesday afternoon. "The Select Committee's investigation goes forward and we will soon announce a date for the postponed proceedings."

The committee had not yet provided a specific agenda for the Wednesday hearing, but Rep. Adam Schiff, D-Calif., said over the weekend it would "tell the story about a key element of Donald Trump's plot to overturn the election."

This week's hearing was intended to close the series of public hearings the nine-member panel embarked on in early June. Throughout eight hearings, the committee — comprised of seven Democrats and two Republicans — sought to show the American public in great detail how former President Trump ignored many of his closest advisers and amplified his false claims of election fraud after he lost the 2020 election to Joe Biden.

Some of the more than 1,000 witnesses interviewed by the panel — a number of them Trump’s closest allies — recounted in videotaped testimony how the former president declined to act when hundreds of his supporters violently attacked the Capitol as Congress certified Biden's victory on Jan. 6, 2021. But the committee has said its work isn't done.

During the August recess, congressional investigators continued to interview witnesses, including several of Trump's cabinet members, some of whom had discussed invoking the constitutional process in the 25th Amendment to remove Trump from office after the insurrection.

Cheney had previously said the committee "has far more evidence to share with the American people and more to gather."

There are also many questions surrounding the effort to overturn the election that remain unanswered as the committee goes into its final three months of work.

Panel members still want to get to the bottom of missing Secret Service texts from Jan. 5-6, 2021, which could shed further light on Trump's actions during the insurrection, particularly after earlier testimony about his confrontation with security as he tried to join supporters at the Capitol. Thompson said earlier this month that the committee has recently obtained "thousands" of documents from the Secret Service.

Last week, the committee was able to secure an interview with conservative activist Virginia "Ginni" Thomas, who's married to Supreme Court Justice Clarence Thomas. Lawmakers want to know more about her role in trying to help Trump overturn the election. She contacted lawmakers in Arizona and Wisconsin as part of that effort.

And the last, but possibly most consequential decision left on the committee's plate is how aggressively to pursue testimony from Trump and former Vice President Mike Pence.

The panel will have to wrap up these loose ends by the end of the year, when the select committee status expires. If Republicans take the majority in November’s elections, as they are favored to do, they are expected to dissolve the committee in January. So the panel is planning to issue a final report by the end of December that will include legislative reforms to help prevent future attempts to subvert democracy.