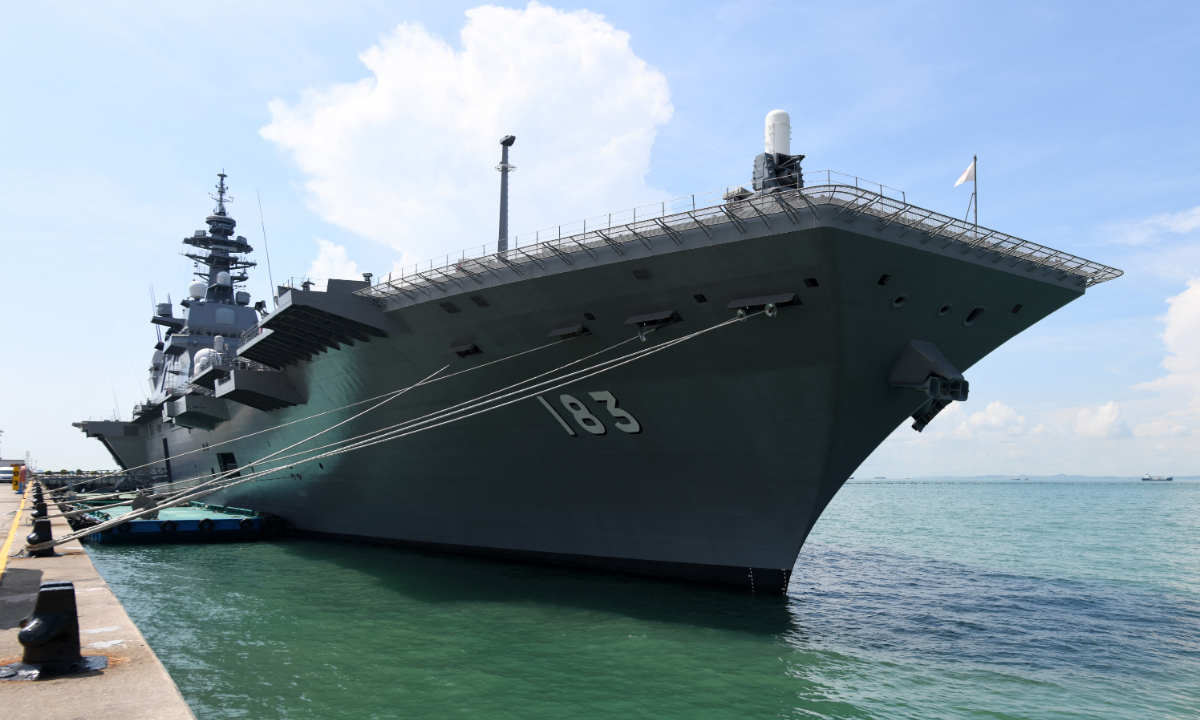 Japan's JS Izumo naval ship is seen during a media tour at Changi Naval Base in Singapore on May 13, 2019. （Photo: AFP）

Japan will fundamentally bolster its defense in five years with a substantial increase in military spending, Japanese Prime Minister Fumio Kishida announced Sunday during the Group of Seven summit in Germany, following the country's high-profile drills with the US and Australia and prior to participation in the US-led large-scale Rim of the Pacific Exercise (RIMPAC).

Making the announcement at the multilateral occasion ahead of Kishida's attendance at the NATO summit on Tuesday demonstrated Japan's ambition of gaining international support for its military expansion, Chinese observers said, noting Japan's attempt risks breaking the power balance in Asia-Pacific plus Japan's domestic militarism resurgence, which poses great threat to regional stability.

Kishida highlighted the severity of the security situation surrounding Japan during the G-7 summit in southern Germany, citing Beijing's dispatch of ships to waters around the Diaoyu Islands and its gas field explorations in the East China Sea as attempts to change the status quo by force, according to Kyodo News.

Kishida did not specify the amount of the increase. There have been strong calls inside Japan asking the government to increase the budget equal to at least 2 percent of gross domestic product, the spending target for NATO nations, according to media reports.

Japan, with its pacifist constitution, has long capped its defense budget at around 1 percent of GDP in recent years.

The high-profile announcement at G7 is clear proof of Japan's ambitions, as it wanted to justify its military expansion to the international community with an excuse of so-called China threat, observers said.

Of the possible spiked military spending, a large proportion will be dedicated to unmanned equipment, cyber and electromagnetic capabilities as well as intelligence-related functions, according to Zhou. "Most of the money will be spent on expanding and enhancing capabilities of the Japan Maritime Self-Defense Force," the expert said.

With China in mind, the Japan Maritime Self-Defense Force conducted the Nobel Partner 22 drill, a trilateral exercise with the US Navy and Royal Australian Navy in the Pacific Ocean from June 19-24. The JS Izumo light carrier, the USS Abraham Lincoln aircraft carrier and the HMAS Canberra amphibious assault ship participated in the drill, Kyodo News reported on Saturday.

Aimed at deterring China, the US-led RIMPAC exercise will begin on Wednesday with the participation of 26 countries including Japan, Yomiuri Shimbun reported on Monday.

Analysts said these drills are not only aimed at deterring and containing China, but also to conspire in a possible military intervention in the Taiwan question at the tactical level.

The US has been indulging in Japan's military development and expansion in the Asia-Pacific, because that conforms to the US' strategic goal to contain China while costing the US less, Zhou said.

Japan is eager to boost its military strength and pull the US and the NATO closer to the Asia-Pacific. Kishida, before flying to Europe, said on Saturday Japan hopes to boost cooperation with NATO "to a new stage," Mainichi reported.

Kishida met with German Chancellor Olaf Scholz on Sunday at the G7 where the two leaders said security in Europe and the Asia-Pacific region are inseparable. Kishida and Scholz agreed to strengthen security cooperation through the next "two-plus-two" meeting of defense and foreign ministers and other inter-governmental consultations, NHK reported.

Kishida then met French President Emmanuel Macron and expressed his desire for France to continue and strengthen its engagement in the Asia-Pacific region, according to NHK.

In apparent responses to Japan's recent military activities, the Chinese People's Liberation Army (PLA) held large-scale drills of its own that saw a large number of warships and warplanes operating in the Pacific Ocean, according to Japan's Defense Ministry and the island of Taiwan's defense authority.

According to the defense authority on the island of Taiwan, six PLA H-6 bombers accompanied by electronic warfare and electronic intelligence aircraft flew through the Bashi Channel and entered the Pacific Ocean on June 21. On Thursday, two H-6J bombers of the PLA Navy and a H-6K bomber of the PLA Air Force flew through the Miyako Strait into the Pacific Ocean, and a Y-9 intelligence reconnaissance aircraft followed on Friday, according to press releases published by Japan's Ministry of Defense Joint Staff.

The PLA sent a Type 052C destroyer and a Type 056A corvette in waters between the island of Taiwan and Japan's Yonaguni Island into the Pacific Ocean, and a Type 052D destroyer and two Type 054A frigates through the Miyako Strait into the Pacific Ocean on June 21, with another Type 052D followed the next day, Japan's Ministry of Defense Joint Staff said at the time, with later reports saying the ships started to return on Thursday and Friday.

A four-ship flotilla consisting of a Type 055 large destroyer, a Type 052D destroyer, a Type 903A comprehensive supply ship and a Type 815 electronic reconnaissance ship have been circumnavigating Japan from its west starting June 12, with all four ships having arrived south of Japan's main island by Sunday, according to Japan's Ministry of Defense Joint Staff.

The PLA drills serve as a deterrent to "Taiwan independence" secessionist and foreign military interfering forces, showing that the PLA has the will, confidence and capability to safeguard China's sovereignty, security and territorial integrity from any force, military experts told the Global Times.