Japan on Tuesday approved new defense guidelines, part of which includes the controversial upgrading and deployment of aircraft carriers in a move unprecedented since the end of World War II.

Japan's new National Defense Program Guidelines, which also spans issues of cyberspace, outer space and electronic warfare as part of its plans to create what it describes as a "multidimensional joint defense force," has already drawn criticism from defense experts, the public and constitutional scholars. 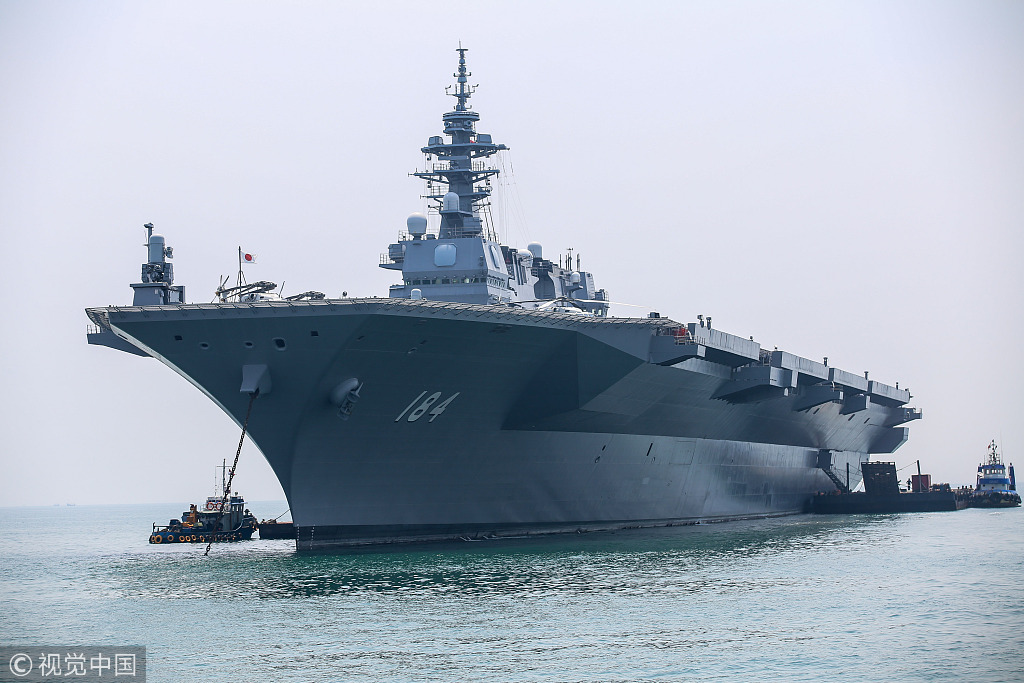 Ship JS KAGA DDH-184 in the Izumo class of the Japan Maritime Self-Defense Force (MSDF), as it arrives at Tanjung Priok port in Jakarta, Indonesia on Tuesday, September 18, 2018. (Photo: VCG)

They have maintained that the bolstering of a multidimensional and integrated defense force is a major step away from Japan's "defense only" posture, which is enshrined in its pacifist constitution.

At the heart of recent controversies and now outlined in the defense guidelines, covering a period from fiscal 2019, is the planned upgrading of the Izumo-class helicopter carrier to enable it to transport and launch F-35Bs multirole stealth fighters.

"We will refit Maritime Self-Defense Force multipurpose helicopter destroyers so fighter jets capable of short takeoffs and vertical landings can be deployed when necessary," the government said in its mid-term defense program, adopted at a Cabinet meeting Tuesday and endorsed by Prime Minister Shinzo Abe.

The defense guidelines, to appease a concerned public, maintain that the retrofitting of the Izumo helicopter carrier to be able to carry and launch F-35Bs, among other aircraft, is not so Japan can posses an attack aircraft carry and is not in breach of the constitution.

Defense analysts, however, have pointed out that under the current interpretation of the Constitution, Article 9 of which reads "land, sea, and air forces, as well as other war potential, will never be maintained," the upgrading of Izumo into a contemporary "de facto" aircraft carrier, whether it permanently carries next-generation fighter jets or not, is in contradiction of Japan's pacifist charter.

Along with Cabinet ministers approving the purchase of 42 F-35Bs and 63 F-35As, the Pentagon's most sophisticated 5th generation multirole stealth fighters and most expensive weapons system, 18 of which will be allocated to the Izumo. Opposition parties have also taken aim at the guidelines for being in excess of Japan's defensive needs.

Japan's defense ministry, as the country is mired in the highest public debt in the industrialized world at more than twice the size of its economy, has requested another record-high budget of some 5.3 trillion yen (47 billion U.S. dollars) for the next fiscal year.

This includes around 235 billion yen (2 billion U.S. dollars) to cover costs related to the installation of two Aegis Ashore missile systems, another military acquisition that has caused public uproar and major concerns from Japan's neighbors.