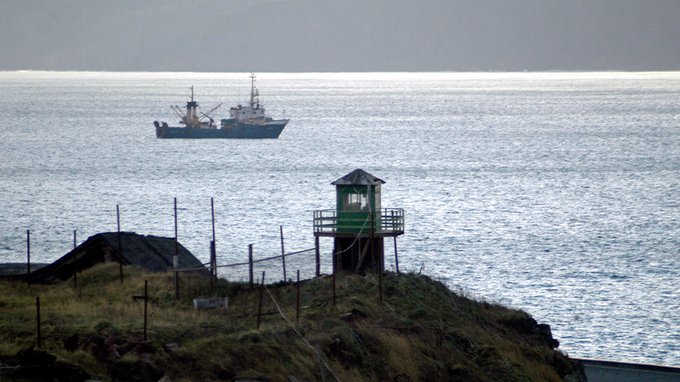 Japan's Foreign Ministry has lodged a protest with Russia over the issue and asked for the boats and their crew to be returned from a "humanitarian standpoint."

He said they were then taken to a port in Furukamappu, also known as Yuzhno-Kurilsk, on Kunashiri Island, for further investigation.

Japan's Foreign Ministry said that the crew aboard the boats voluntarily disclosed what they were carrying to the Russian guards, with the Russian side saying the boats were seized for the purpose of further inspections.

Tokyo and Moscow have been at odds over the sovereignty of the four Russian-held islands, with the territorial spat preventing the two countries from signing a post-World War II peace treaty and hindering diplomatic and trade relations between the two countries.

Japanese Foreign Minister Toshimitsu Motegi is currently in Moscow to hold talks with his counterpart Sergey Lavrov during a five-day trip.

Motegi, who now heads talks with Russia over the protracted territorial dispute between both countries, said the talks would be aimed at rebooting negotiations towards resolving the decades-old row.

The talks with Lavrov would be the "start of negotiations in earnest to resolve the territorial issue and sign the peace treaty based on the 1956 joint statement," Motegi told a press briefing on the matter ahead of his visit.