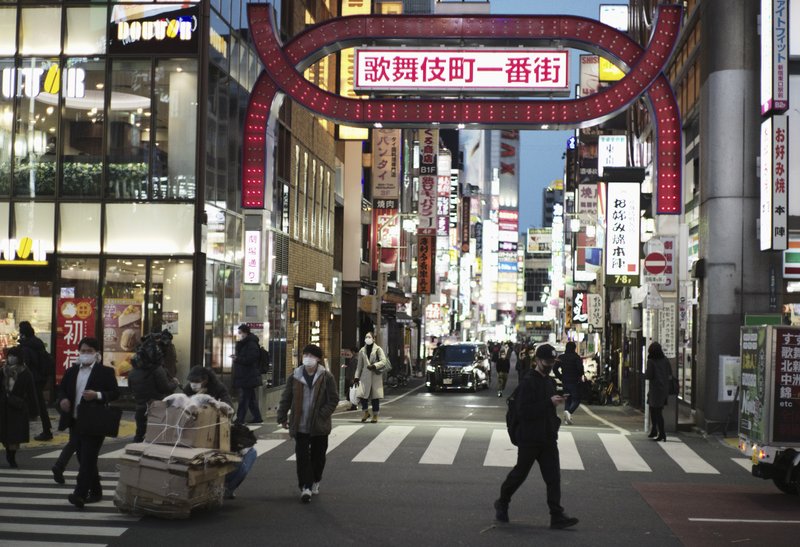 People wearing face masks to help curb the spread of the coronavirus walk across an intersection at Shinjuku neighborhood of Tokyo on Thursday, Jan. 7, 2021. (Photo: AP)

Japan's government declared a month-long coronavirus state of emergency in the greater Tokyo area on Thursday as the capital reported a record surge in daily infections.

"The nationwide, rapid spread of the new coronavirus is feared to have a great impact on people's lives and the economy," said Prime Minister Yoshihide Suga as he announced the new restrictions, which begin on Friday.

The measure is far less strict than the harsh lockdowns seen in other parts of the world, and softer than the country's first state of emergency last spring.

It primarily targets restaurants and bars, which will be asked to stop serving alcohol by 7 pm and close an hour later, with residents requested to avoid non-essential outings from 8 pm.

In Tokyo and three surrounding areas that petitioned the government to make the move, businesses will also be urged to maximise teleworking with the goal of reducing commuter traffic by 70 percent.

"Every day we are seeing record numbers of infections. We have a very serious sense of crisis," Yasutoshi Nishimura said.

Still, Japan's outbreak remains comparatively small, with just over 3,700 deaths since the country's first infection was detected in January 2020.

The government had been reluctant to call a state of emergency for fear of sending the economy into reverse shortly after it emerged from recession. Greater Tokyo accounts for a third of Japan's GDP.

"A contraction of GDP in Q1 is inevitable" with the new measure, Masamichi Adachi, Japan chief economist at UBS Securities told AFP.

"Balancing economic and public health concerns is difficult... it's a very difficult situation to manage for any leader."

Suga's approval ratings have nosedived over his handling of the latest wave of infections -- particularly his government's controversial backing of a domestic travel campaign despite spiking case numbers.

He has said this emergency will be more limited and focused than last year's, despite warnings from medical experts that it may be insufficient.

Schools will not close and major events will be permitted, with the cap for spectators revised down to 5,000 people or 50 percent capacity, whichever is smaller.

Japanese law does not currently allow authorities to enforce cooperation with the requests, though the government is planning legislation permitting fines for businesses that do not comply.

For now, subsidies will be offered to businesses that close early, and the government could name-and-shame those that fail to do so.

The measure comes just over six months before the virus-postponed Tokyo 2020 Olympics are due to open, and Suga this week insisted he was still committed to holding the Games as "proof of mankind's victory over the virus".

But the emergency is likely to harden public opinion, with a majority opposed to holding the Games this year even before the third wave worsened.

Tokyo 2020 organisers said Thursday they would delay a planned display of the Olympic and Paralympic torches in the capital. They were due to be exhibited before the countrywide torch relay starts on March 25.

Japan has yet to approve a coronavirus vaccine, with Suga saying this week he hoped the first jabs could begin in late February.