Japan's new Emperor Naruhito on Tuesday began a string of ritual-bound ceremonies that complete his ascension to the Chrysanthemum throne, with the after-effects of a deadly typhoon casting a shadow over proceedings. 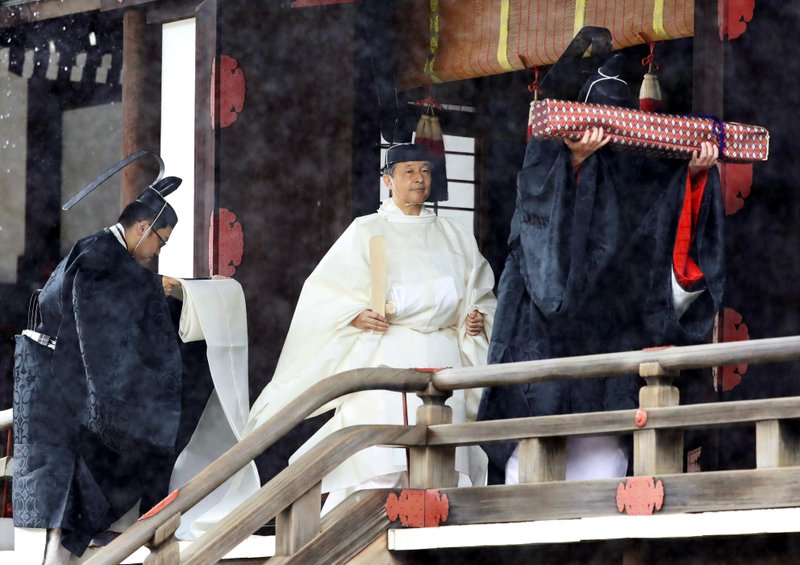 Japan's Emperor Naruhito, in a white robe, leaves after praying at “Kashikodokoro”, one of three shrines at the Imperial Palace, in Tokyo, Tuesday, Oct. 22, 2019. (Photo: Kyodo News via AP)

Naruhito officially assumed his duties as emperor on May 1, a day after his father became the first Japanese monarch to abdicate in 200 years.

But the transition is not complete until his new role is officially proclaimed, in a series of events expected to be attended by foreign dignitaries from over 180 countries.

The festivities have been scaled back however in the wake of devastating Typhoon Hagibis, which slammed into Japan just over a week ago, killing more than 80.

With people still searching for missing loved ones and living in shelters, the government has postponed until November 10 an open-top car parade that had been intended to introduce the royal pair to the public.

But the rest of the day's ceremonies are going ahead as planned, and Naruhito began the day by "reporting" the proclamation to deities and his ancestors in the ancient royal dynasty.

Dressed in a voluminous white robe and a rarely seen kanmuri black hat complete with a tail extending up 60cm (two feet) at the back of his head, he moved between three "sanctuaries" on the palace grounds, trailed by attendants.

A small group of guests, including Prime Minister Shinzo Abe and other cabinet members and royal relatives including Crown Prince Akishino, attended the ceremony.

Later Tuesday, the emperor and his wife Empress Masako will appear at the day's main event in the Imperial Palace's prestigious Pine Room. 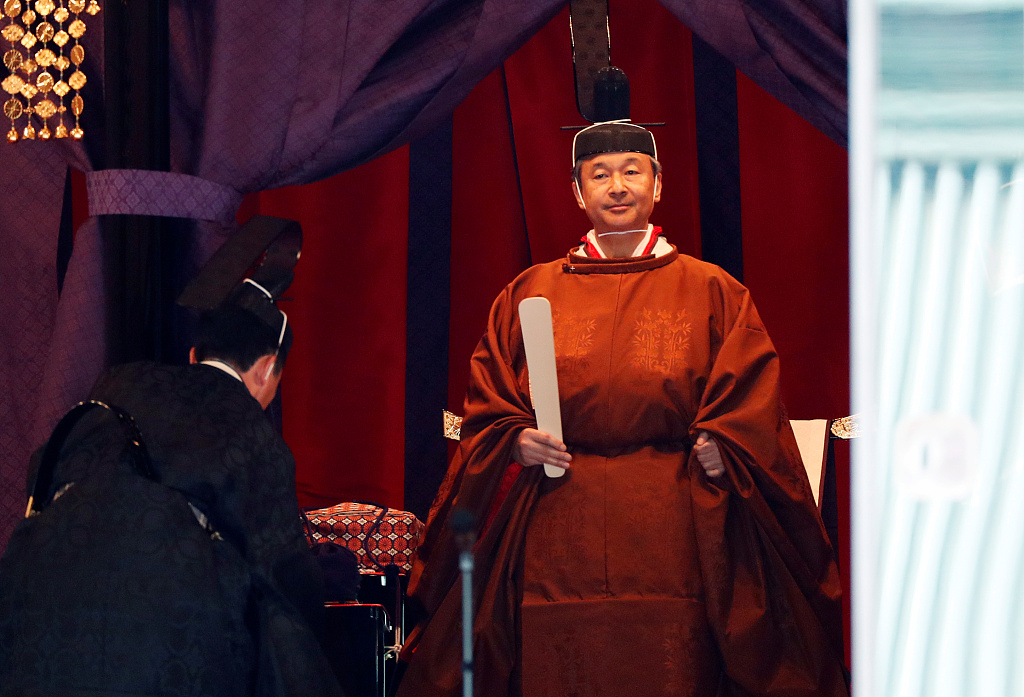 Japan's Emperor Naruhito makes his appearance during a ceremony to proclaim his enthronement to the world, called Sokuirei-Seiden-no-gi, at the Imperial Palace in Tokyo, Japan, October 22, 2019. (Photo: VCG)

Naruhito, in a ceremonial outfit dominated by a draped outer robe in copper -- a colour worn only by the emperor -- will declare his enthronement from the "Takamikura" throne.

Empress Masako, a Harvard-educated former diplomat, will wear an elaborate outfit known as "junihitoe" or many-layered robe, and be alongside the emperor on a slightly smaller throne.

Her silk robes will be so heavy it will be difficult for her to move, and attendants will trail her adjusting her outfit.

The ceremony will be conducted in the presence of an ancient sword and jewel -- part of the imperial regalia said to have been handed down by a goddess and considered crucial evidence of an emperor's legitimacy.

Some 2,000 guests, including foreign dignitaries and royalty, will rise to drum beats before the proclamation.

While the parade has been put off, a series of banquets for guests ranging from Britain's Prince Charles to South Korean Prime Minister Lee Nak-Yon will go ahead.

And the government announced more than half a million people convicted of minor offences will be pardoned as part of the events.

On Tuesday morning, only a handful of people braved driving rain to stand outside the palace for a glimpse of arriving visitors.

Sanae Yasuda, in her 70s, had booked a tour from central Japan's Nagoya for the occasion, and decided to come even after the parade was cancelled.

"I wanted to see the parade, and not just the emperor and empress, but to experience the atmosphere because it's so rare," she told AFP.

"I didn't know the palace was closed, I wanted to go inside... I'm still happy to be here."

Oxford-educated Naruhito faces a delicate balancing act as emperor, seeking to continue his father's legacy of bringing the monarchy closer to the people while upholding the centuries-old traditions of the Chrysanthemum Throne.

And the royal line faces its own challenges, with a dearth of successors thanks to rules that prevent women from inheriting the throne.

The royal couple have one child, a 17-year-old daughter called Aiko.

Naruhito's brother Akishino is currently crown prince. And Akishino's son -- 13-year-old Hisahito -- is currently the only other remaining successor.

Despite the succession worries, the royals remain broadly popular.

A poll released by national broadcaster NHK on the eve of the ceremony found 70 percent of voters in the country hold "friendly or favourable" views towards the imperial family.