Japan on Thursday executed the last members of the cult sentenced to death for their role in the fatal 1995 sarin attack on the Tokyo subway, weeks after the group's leader was hanged. 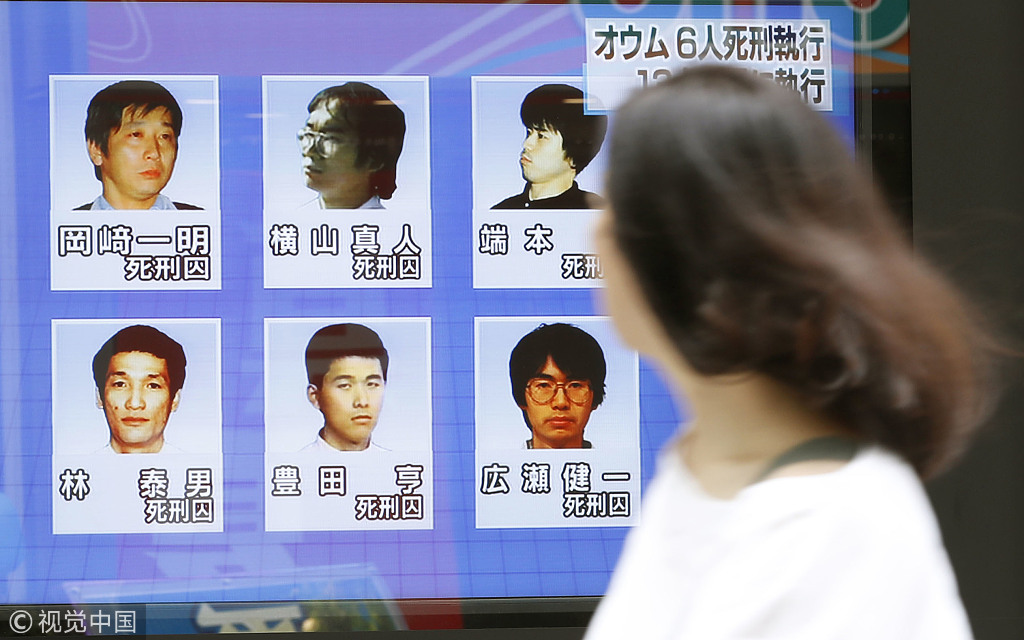 A woman walks on July 26, 2018 beside a street television screen in Tokyo showing six former AUM Shinrikyo cult members who were executed earlier in the day. (Photo: VCG)

The execution of the six Aum Shinrikyo members, years after they were put on death row, draws a line under the horrific attack which shocked the world and prompted national soul-searching over the group and its crimes.

"I ordered the executions after extremely careful consideration."

In all, 13 Aum members, including the cult's near-blind leader Shoko Asahara, were on death row for crimes including the 1995 sarin attack on Tokyo's subway.

Local media said authorities wanted the death sentences against the Aum members to be carried out before Japan's emperor abdicates next year, when a new imperial era will begin.

Since the Aum's crimes were committed during the Heisei era of the current emperor, authorities wanted the executions complete before the new era begins, local media reported.

Some of the Aum's victims said it would be hard to simply move on.

"With the 13 members executed, perhaps the case is closed from the point of view of criminal justice," Shizue Takahashi, whose husband was killed in the subway attack, told reporters.

"(But) the damage done to the victims continues even after the executions. I find it very hard."

The Aum gained international infamy with the 1995 sarin attack on the Tokyo subway during rush hour, which killed 13 people and injured thousands more.

Members of the group released the chemical in liquid form at five points throughout the subway network, and soon commuters began struggling to breathe, staggering from trains with their eyes watering.

Others keeled over, foaming at the mouth, with blood streaming from their noses.

The attack plunged the capital into chaos, and prompted a crackdown on the cult's headquarters in the foothills of Mount Fuji, where authorities discovered a plant capable of producing enough sarin to kill millions.

Aum members, including those executed this month, were also convicted of crimes including an additional sarin attack in the town of Matsumoto the year before the Tokyo attack, and the murder of an anti-cult lawyer and his family. Many of the group's members remain in prison.

The 13 cult members spent years on death row as prosecutors investigated their crimes, and some activists opposed the executions, fearing the members would be elevated to the status of martyrs.

But victims of the group's attacks welcomed the execution of Asahara and six other Aum members earlier this month.

One man who was injured in the subway sarin attack told AFP he felt "the world had become slightly brighter".

Asahara developed his cult in the 1980s, and at one point the wild-haired "guru" had at least 10,000 followers, including the doctors and engineers who produced the group's chemical agents.

Despite the crackdown on the Aum, it was never formally banned.

It officially disowned Asahara in 2000 and renamed itself Aleph, but experts say the former guru retained a strong influence before his execution.

Asahara's execution set off a battle among his surviving family members for his remains, with his wife and several children who are in successor cults to the Aum seeking to obtain them.

He was cremated days after his execution, and his youngest daughter, who has broken with the Aum's successor cults, said she would receive his ashes, which will reportedly be scattered at sea to avoid creating a pilgrimage site for Asahara's followers.