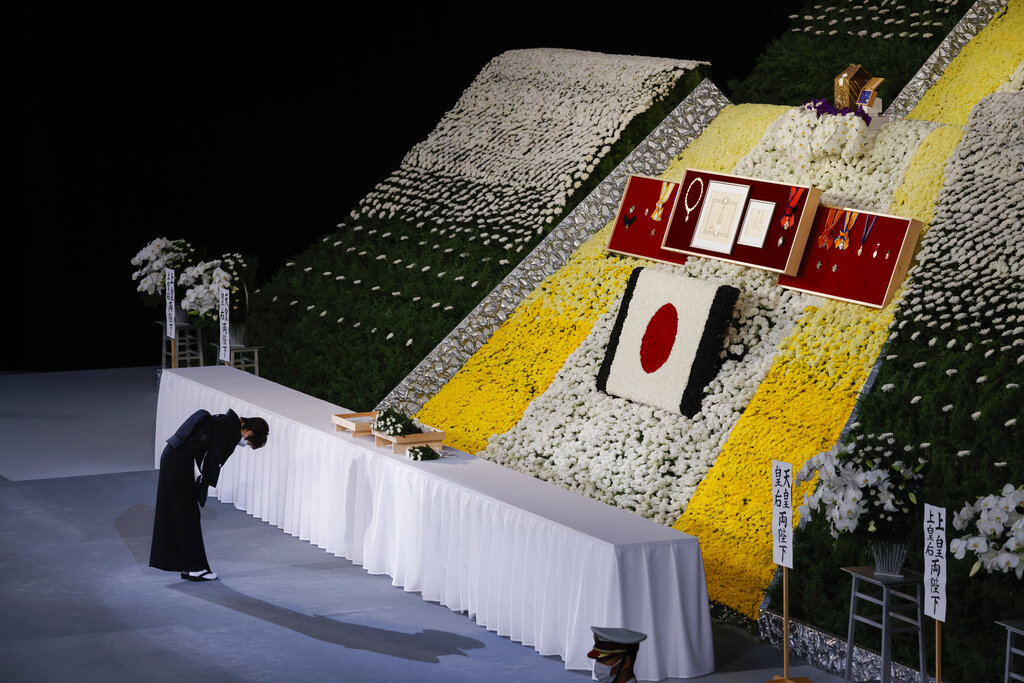 Japanese and foreign dignitaries paid tribute to assassinated former prime minister Shinzo Abe at a state funeral on Tuesday that drew both mourners and protesters to central Tokyo.

Prime Minister Fumio Kishida described the former leader as a "person of courage" in a eulogy, listing his achievements, including efforts to strengthen Japan's diplomatic ties.

"I feel heart-breaking grief," Kishida said as he faced a photograph of Abe that was hung above a grand floral structure used to display his ashes, medals and the Japanese flag.

The decorative box of ashes had been carried by his widow Akie into Tokyo's storied Budokan venue, where a 19-gun salute sounded in honour of the slain politician. 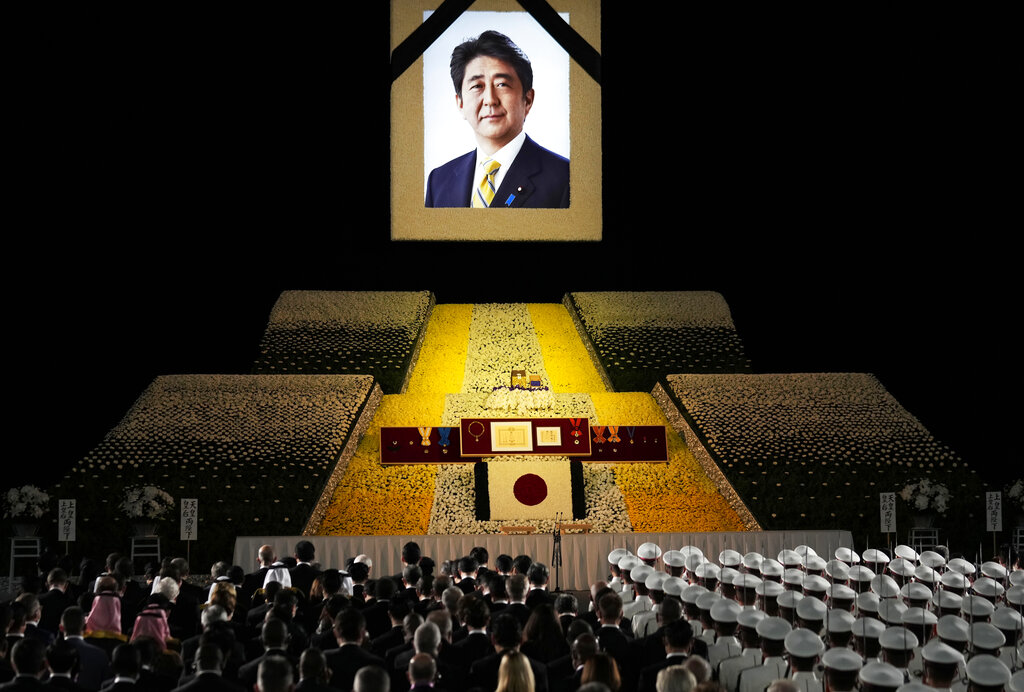 Abe was Japan's longest-serving prime minister and one of the country's most recognisable political figures, known for cultivating international alliances and his "Abenomics" economic strategy.

He resigned in 2020 over recurring health problems, but remained a key political voice and was campaigning for his ruling party when a lone gunman killed him with a homemade weapon on July 8.

But the decision to give him a state funeral -- only the second for a former premier in the post-war period -- has provoked opposition, with around 60 percent of Japanese against the event in recent polls.

US Vice-President Kamala Harris and world leaders including Indian Prime Minister Narendra Modi and Australian premier Anthony Albanese were among those in attendance at the Budokan.

Outside, thousands of people stood in line as the ashes arrived, waiting to deliver flowers and say a prayer in two mourning tents.

Koji Takamori came all the way from northern Hokkaido with his nine-year-old son.

"I wanted to thank him. He has done so much for Japan," the 46-year-old told AFP.

"The way he died was so shocking. To be honest, I also came because there has been so much opposition. It's almost like I'm here to oppose those who are opposing this (funeral)," he added.

Those opponents were also out, marching near the tents before a larger demonstration in front of the parliament. 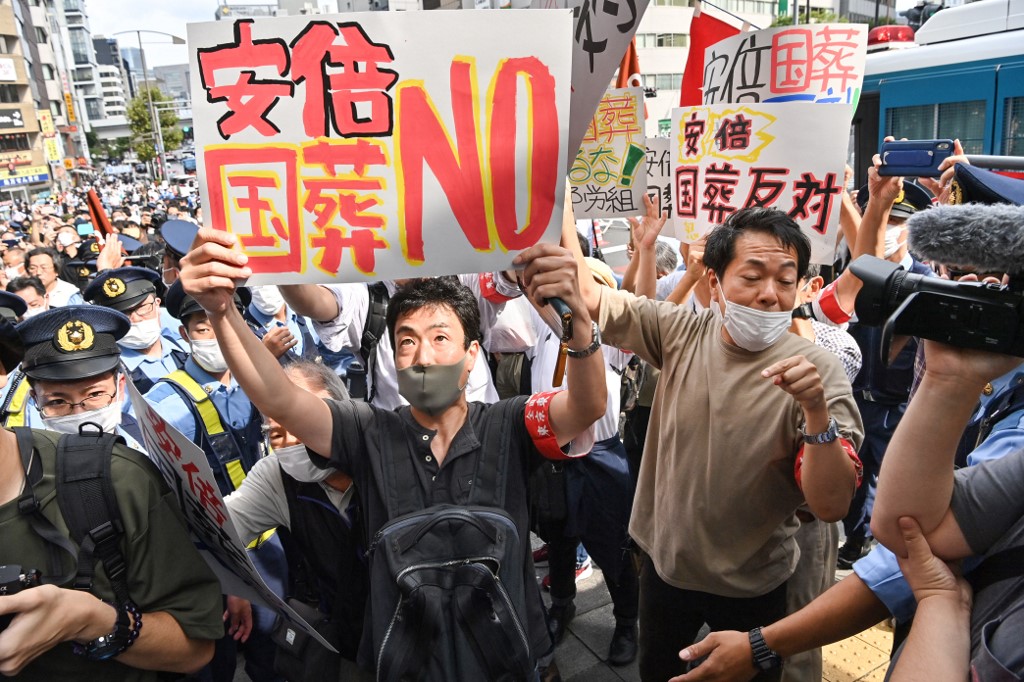 Protesters take part in a demonstration against the state funeral for Japan's former prime minister Shinzo Abe near the Nippon Budokan, where the funeral was to take place, in Tokyo on September 27, 2022. (Photo: AFP)

"There are people struggling financially who suffered particularly under the 'Abenomics' policies. We must not forget this," Ryo Machida, a 19-year-old student, said outside the Budokan.

"He may have been a strong leader, but in hindsight, he was iron-fisted and anti-democratic."

Abe's accused killer targeted the former leader believing he had ties to the Unification Church, which the attacker resented over massive donations his mother had made to the sect.

The assassination prompted fresh scrutiny of the church and its fundraising -- and uncomfortable questions for Japan's political establishment, with the ruling party admitting around half its lawmakers had links to the religious organisation.

Kishida has pledged the party will sever all ties with the church, but the scandal helped fuel discontent over the state funeral.

Thousands have protested in the run-up to the ceremony and a man set himself on fire last week near the prime minister's office, leaving notes reportedly expressing his objection to the event.

Some lawmakers from opposition parties are also boycotting the funeral.

The controversy has several roots, with some accusing Kishida of unilaterally approving the funeral instead of consulting parliament, and others resentful of a nearly $12 million price tag.

It is also the legacy of Abe's divisive tenure, marked by persistent allegations of cronyism, and opposition to his nationalism and plans to reform the pacifist constitution.

Kishida's government may have hoped the solemnity of the event, attended by an estimated 4,300 people including 700 foreign invitees, would drown out the controversy.

Abe worked to cultivate close ties with Washington to bolster the key US-Japan alliance, and also courted a stronger "Quad" grouping of Japan, the United States, India and Australia.

Japan's emperor and empress are not attending, as neutral national figures, but Crown Prince Akishino and his wife led mourners in offering flowers at the end of the service.