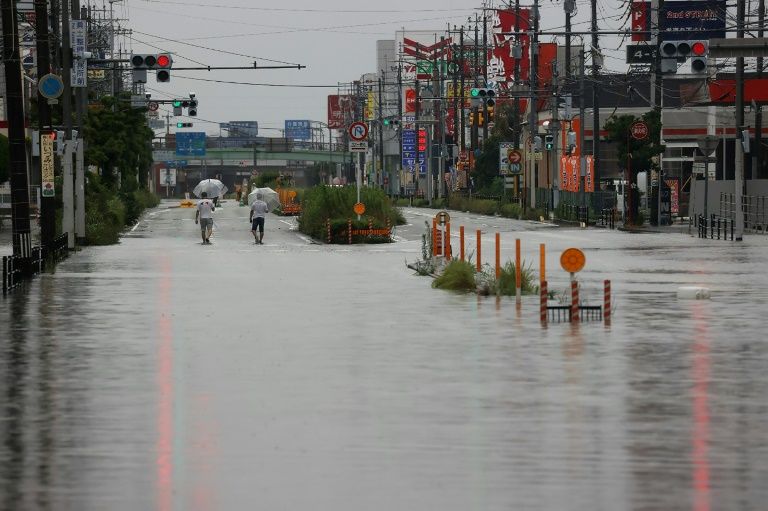 Japan issued fresh landslide and flooding warnings Wednesday as torrential rain moved over the centre of the country and the death toll from days of downpours rose to 54.

Heavy rains that began early Saturday on the island of Kyushu have already caused devastation across a swathe of the southwestern portion of the country, causing rivers to burst their banks and hillsides to collapse.

The weather front is now moving north, and on Wednesday morning the Japan Meteorological Agency (JMA) issued its highest level warning for Gifu and Nagano prefectures in central Japan.

"In these areas, heavy rains are at an unprecedented level," a JMA official said.

"Especially in areas designated as high risk for landslides and flooding, the possibility is extremely high that some kind of disaster is already happening," he warned.

"It is a situation where you have to do your best to protect your lives."

At least 80,000 rescue workers have already been deployed in a desperate effort to reach survivors stranded by flooding and landslides.

Late Tuesday, Prime Minister Shinzo Abe pledged to double the number of troops involved in the rescue effort to 20,000.

The toll in the disaster has risen steadily as rescue workers discover new casualties.

The government's Fire and Disaster Management Agency said at least 54 people had died, with four more feared dead and 14 others missing.

In hardest-hit Kyushu, the rains had mostly stopped by Wednesday morning, leaving residents in mourning and trying to come to terms with extensive damage.

Naomi Nishimura told Japan's NNN broadcaster that her parents had been killed in flooding in Hitoyoshi City in Kumamoto region.

"Even though a neighbour came over and pleaded with my parents to evacuate, they didn't go... because I had told them that I'd come home (that day)," the tearful women said as she attempted to clean her parents' flood-devastated home.

In Kashima city in northern Kyushu's Saga region, a woman was mopping the floor of a local souvenir shop that was inundated when a nearby river burst its banks.

"It usually settles at the very edge of that stone bridge, but this time the water splashed up without stopping," she said.

"The water rose so fast that I was terrified. I was too scared and shaky to do anything, I just kept going this way and that," she added, surrounded by knick-knacks now coated in mud.

But the coronavirus has complicated evacuation efforts, with the need to maintain social distancing reducing capacity at shelters.

Japan has been relatively lightly affected by the pandemic, with just under 20,000 cases and fewer than 1,000 deaths.

But local media reported that some people were preferring to sleep in cars rather than risk infection at shelters.

At some facilities, cardboard walls were set up to separate families and try to reduce the risk of infection.

Authorities have warned that the rains are expected to continue through Thursday.

"It is too late to wait to evacuate until special warnings are issued," a JMA official said on Wednesday morning.

Japan is in the middle of its annual rainy season, which frequently unleashes deadly floods and landslides.

In 2018, more than 200 people died in devastating floods in western Japan.