TOKYO－Japan is moving toward lifting a state of emergency imposed on some prefectures and looking to start clinical trials of vaccines against the coronavirus as early as July, Prime Minister Shinzo Abe said on Monday. 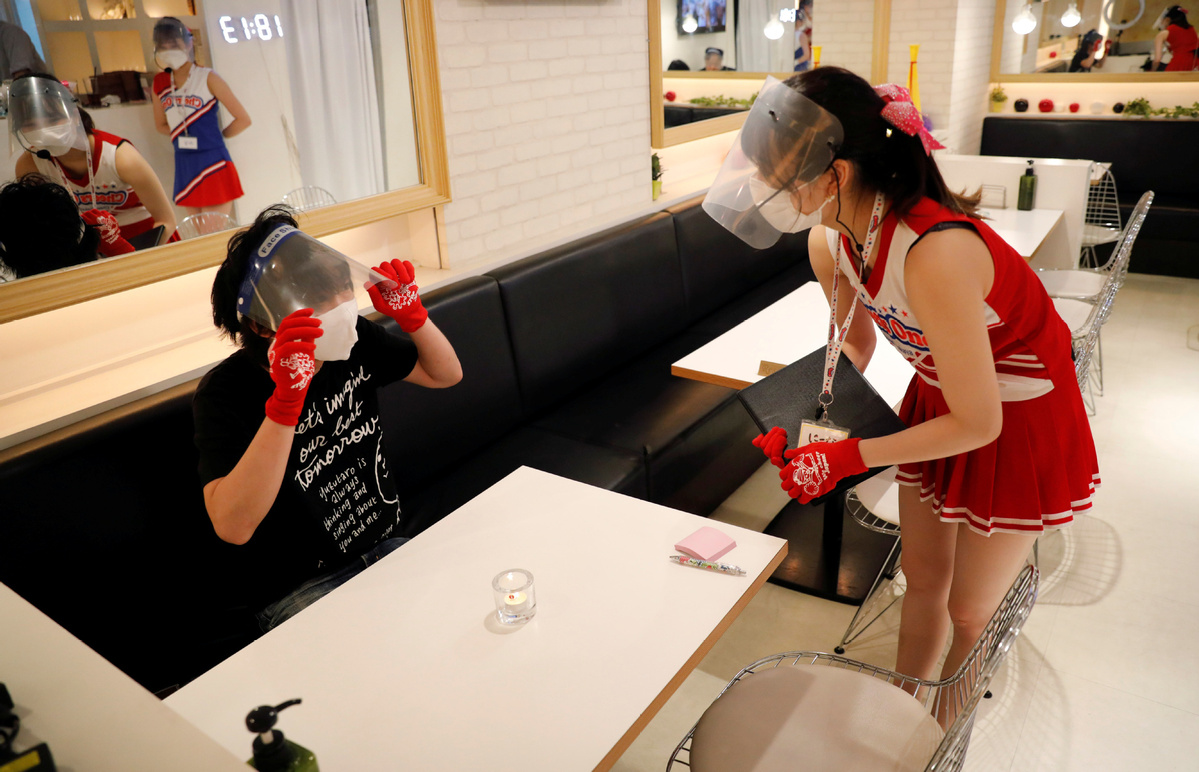 A waitress wearing a protective mask, face-shield and gloves to prevent infections following the coronavirus disease (COVID-19) outbreak, serves a customer at the cheerleader-themed restaurant 'Cheers One' in Tokyo, Japan May 11, 2020. (Photo: Agencies)

Japan is on a "steady" path toward ending the epidemic and some prefectures could be taken off the list of those with a declared emergency before a scheduled May 31 expiry, Abe said.

"We are planning to hear expert opinions on May 14 and announce if any partial lifting will be possible," he said.

On the plans for clinical trials of vaccines, he said the development work is being carried out at several institutions in Japan.

In the meantime, concerns have been raised by the findings of a health ministry survey that the country's 47 prefectures have fewer than half the number of hospital beds they will need for patients when the outbreak reaches its peak.

Elsewhere in Asia, South Korean officials scrambled on Monday to contain a new outbreak, as the number of infections connected to bars and clubs in Seoul's popular night life district of Itaewon climbed to 86.

That number, released at noon, includes 63 club visitors and 23 family members and friends who came in contact with the clubbers, the Korea Centers for Disease Control and Prevention said at a press briefing. The total number of infections has reached 10,909.

Authorities have tested 4,000 people who had patronized the night spots in the Itaewon neighborhood, but were still trying to track down around 3,000 more.

"Our top priority is to minimize the spread of the infections in the greater Seoul area," Prime Minister Chung Sye-kyun told a meeting with government officials on Monday.

In India, one of the world's largest train networks will gradually restart operations from Tuesday, even after the country reported its biggest daily increase in cases on Monday.

Some 30 train services will run from the capital New Delhi to cities including Mumbai, Bangalore and Chennai, Indian Railways said on Sunday.

The vast train network, which had carried more than 20 million passengers daily before the outbreak, was halted in late March as India imposed a strict lockdown to stem the spread of the virus.

In Iran, a county in its southwest has been placed under lockdown to prevent the spread of the virus, after Khuzestan province in which it sits was reported to have a sharp rise in new cases.

Banks and offices in Abadan will be closed until the end of the week and entry corridors to the county from the north and east have been closed.