TOKYO, Feb. 13 (Xinhua) -- On the boxes of masks donated by a Japanese institution to China in its fight against the novel coronavirus, a Chinese-language verse was written, "Although we are in different places, we are under the same sky." 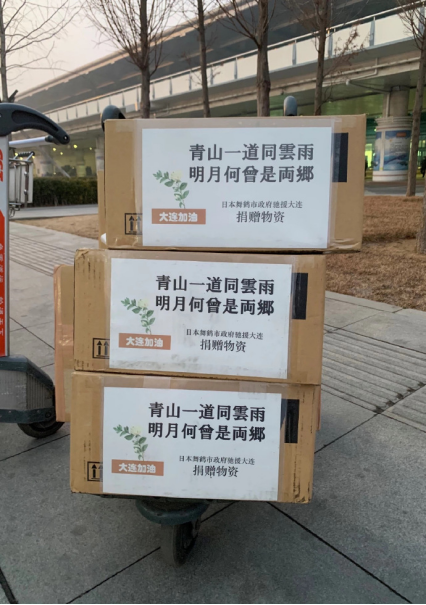 The sentence, from an ancient poem depicting the long-lasting friendship between China and Japan, has gone viral on social media, with the heartfelt support of the Japanese people touching many in the wake of the novel coronavirus outbreak.

The batch of aid included 20,000 masks and a number of infrared thermometers donated by the Japanese HSK Bureau to colleges and universities in the central Chinese province of Hubei, whose capital Wuhan is the epicenter of the coronavirus epidemic.

On Monday, the ruling Liberal Democratic Party of Japan (LDP) said it had decided to deduct 5,000 yen (45.43 U.S. dollars) from the March salary of every LDP parliamentarian and donate it to support China's fight against the outbreak, a sum totaling 2 million yen (18,170 dollars).

"For Japan, when it sees a virus outbreak in China, it is like seeing a relative or neighbor suffering. Japanese people are willing to help China and hope the outbreak will pass as soon as possible," said Toshihiro Nikai, secretary-general of the LDP.

Japan's Oita Prefecture, a sister prefecture of Wuhan, took the lead in donating after the outbreak, sending 30,000 masks, 600 sets of protective clothing, and 400 goggles to the city on Jan. 27. The dozens of boxes containing the aid bore Chinese characters translating to, "Keep fighting, Wuhan."

Since then, other Japanese cities have taken action to support China's battle against the epidemic. The city of Mito donated 50,000 masks to its Chinese sister city Chongqing on Jan. 28.

On Feb. 6, the Japanese city of Okayama donated 22,000 face masks to its sister city Luoyang. "Come on, China! Come on, Luoyang! The people of Okayama support you!" read the Chinese characters written on the boxes.

Not only has Japan given aid to China on a governmental level, but the Japanese people are also making their own contributions to the fight against the virus.

On the Chinese Lantern Festival, which fell on Feb. 8, a Japanese girl wearing a red Chinese cheongsam stood in a busy street in Tokyo holding a donation box.

She bowed deeply to passers-by to raise money to help those in China affected by the outbreak, an action that has touched many on social media.

The Zhangbin Erhu College in Nagoya recently donated 50,000 medical masks, 8,000 protective masks, and 200 sets of protective clothing to the Chinese city of Nanjing, a donation mostly contributed to by Japanese students.

"Go, China!" "We wish you good health, come on!" Those are the words the students wrote on the masks' packaging.

Other signs and banners bearing good wishes for China can also be seen in Japan's streets. In Osaka's Dotonbori business district, banners have been hoisted along the streets, reading "Go Wuhan! Be strong, Wuhan!"

Many netizens have also been touched by Japan's support and have expressed their appreciation.

"A friend in need is a friend indeed," a Facebook user named Yongjie Hwang commented on a post about Japan's support of China.