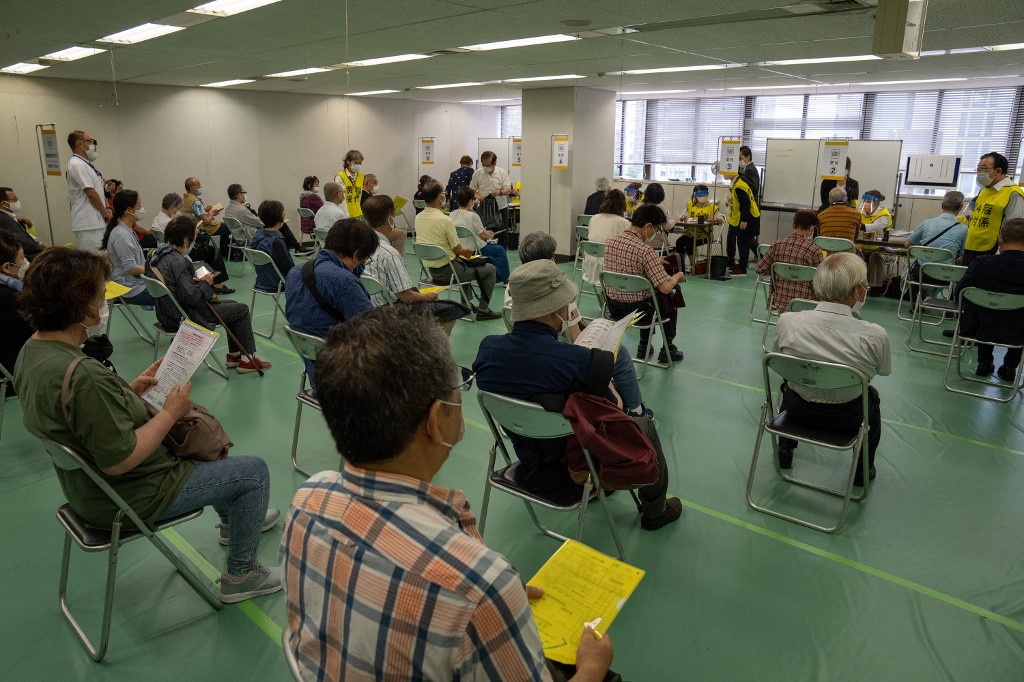 People wait to be processed after arriving to receive the Moderna coronavirus vaccine at the newly-opened mass vaccination centre in Tokyo on May 24, 2021. (Photo: AFP)

TOKYO, May 24 (Xinhua) -- Japan on Monday opened large-scale vaccination centers in Tokyo and Osaka with the state-backed facilities aimed at speeding up the country's sluggish COVID-19 vaccination rollout.

With just two month to go until Tokyo is scheduled to host the summer Olympics and with the country's vaccination campaign the slowest among OECD countries, the government has enlisted Self-Defense Forces (SDF)' doctors and nurses to operate the facilities for three months.

The SDF personnel will be administering jabs using the newly-approved Moderna Inc. COVID-19 vaccine, developed in the United States and formally approved here on Friday.

Up until now Japan had only been using the vaccine developed by Pfizer, but also Friday approved the use of Britain's AstraZeneca Plc., although the AstraZeneca vaccine, developed with the University of Oxford, may not be rolled out immediately amid concerns over extremely rare instances of blood clots occurring after the jabs were administered in some countries overseas.

The government is hoping that the two mass vaccination centers will be able to compete administering the vaccinations to 36 million seniors aged 65 or older by the end of July.

The centers will be accepting reservations for jabs from seniors living in prefectures neighboring those where the large-scale centers are located, the health ministry has said.

"It did not hurt and was over quickly," said a 66-year-old woman, one of 30 or 40 elderly people who had began gathering from around 7:30 a.m. to receive their jabs at a government building in Tokyo's Otemachi business district.

She said she decided to get a shot at the mass venue otherwise she would have had to wait until June to receive her shot under the regular prefectural system.

"The government will continue to make all-out efforts so that as many people as possible can be inoculated as quickly as possible," Chief Cabinet Secretary Katsunobu Kato told a press briefing on the matter.

Japan has the lowest rate among OECD countries of administering COVID-19 vaccinations to its population of 126 million people and according to recent government data, Japan had administered at least one shot to around just 4 percent of its population.

Meanwhile, multiple municipalities have said they expect to miss the government's end-of-July deadline to finish inoculating the elderly, due to a lack of healthcare workers available to administer the shots and reservation systems being plagued with technical issues.