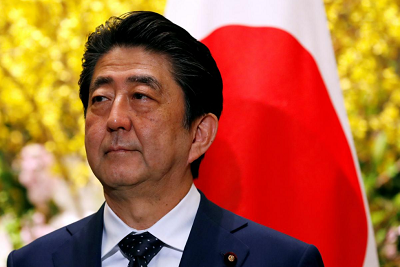 Abe and Finance Minister, Taro Aso, 77, have been under fire since the finance ministry said on Monday that it had altered records relating to a discounted sale of state-owned land to a school operator that had ties to Abe’s wife, Akie.

Abe and Aso have both denied wrongdoing.

But opposition parties are calling for Aso to resign, while the affair could dash Abe’s hopes of winning a third three-year term as head of his Liberal Democratic Party in a September party leadership election. Abe took office in December 2012.

“I believe it is getting clearer that falsification was carried out to erase any trace of documents that lead to Ms Akie Abe,” Japanese Communist Party lawmaker Kotaro Tatsumi told a parliamentary committee.

Abe’s level of support is lower than the 40.4 percent who do not support him, the first time since October that his support has slipped below the level of those who don’t back him, according to the survey, published on Friday.

More than 25 percent of those who did not support Abe in the Jiji survey, conducted between March 9 and March 12, cited a lack of trust in the premier as their reason.

“In particular, this time the people are turning a very harsh eye on us,” he said.

“We will work to make sure this never happens again and to regain trust.”

Protesters have flocked to the area around the prime minister’s office every night since Monday, calling for Aso and Abe to resign. Organisers said about 3,000 people participated in Thursday’s demonstration, NHK public television said.

Aso told a parliamentary committee on Friday that he did not intend to quit and said his job was to find the reason why the documents were doctored and to prevent something similar from happening again.

“I am saying that I do not intend to resign,” Aso told the upper house committee, where opposition lawmakers grilled him, along with finance ministry bureaucrats and other officials, about the scandal, including who knew what and when.

The finance ministry announced on Friday that Aso would not attend a meeting of Group of 20 finance leaders next week.

Aso has said that responsibility for the land sale lay with Nobuhisa Sagawa, who stepped down as tax chief on Friday last week. Sagawa headed the finance ministry division that submitted the documents before he became tax agency chief in July.

Suga said on Thursday that the land ministry had told his deputy on March 5 about possible differences between copies of documents in its possession and versions the finance ministry had submitted to parliament.

Suga told reporters he was told about the issue on March 6 and he said he thought his deputy told Abe about the matter the same day. Abe had said he received a report on the altered documents on March 11.

On March 8, the finance ministry submitted copies of what it later acknowledged on March 12 were altered documents.

“It was not a stage where we could confirm the documents,” Suga repeated on Friday when asked why he had not made the land ministry’s concerns public. He added that he saw no problem in how the premier’s office had handled the matter.