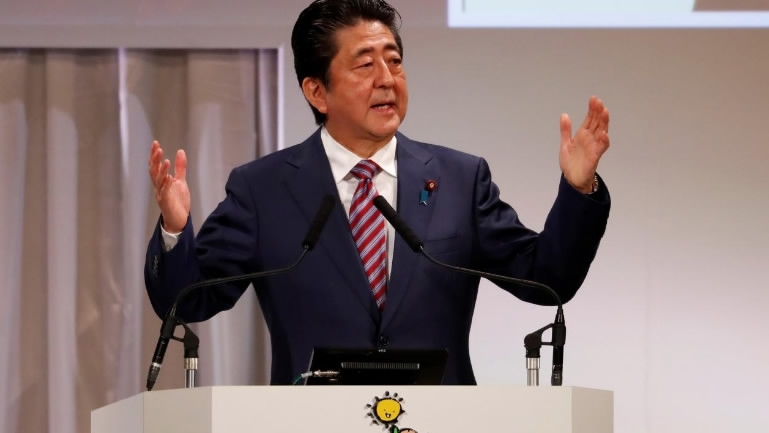 In another headache for the conservative premier, the finance ministry’s top bureaucrat has come under fire after a weekly magazine reported he had sexually harassed several female journalists. The bureaucrat on Monday denied the accusations and said he would file a lawsuit against the magazine’s publisher.

Abe’s sliding ratings raise doubts about whether he can win a third three-year term as ruling Liberal Democratic Party (LDP) leader in a September vote, that he needs to win to stay in office, or whether he might resign before the party vote.

Speculation has even emerged that Abe, who surged back to power for a second term as prime minister in December 2012, promising to reboot a stale economy and bolster Japan’s defenses, could call a snap general election as he did last October when his ratings were in a similar slump.

A survey by broadcaster Nippon TV released on Sunday showed Abe’s support had sunk to 26.7 percent, the lowest since he took office in December 2012. An Asahi newspaper poll on Monday put his support at 31 percent.

The latest signs of trouble for Abe come ahead of a summit this week with US President Donald Trump, where the difficult topics of Pyongyang's nuclear and missile threats and trade will be on the agenda.

“The situation is getting dangerous. Won’t Mr Abe resign around the time parliament’s session ends?” former premier Junichiro Koizumi, a one-time Abe mentor, said in an interview published by the online edition of the weekly magazine Aera.

The session ends on June 20.

Koizumi – a critic of Abe’s support for nuclear power after the 2011 Fukushima accident – said that if Abe hung on, it could hurt LDP candidates in an upper house election next year.

The Asahi survey, in line with others, showed that two-thirds of voters did not trust Abe’s explanations that he was not involved in the cronyism scandals.

Abe has denied that he had intervened to ensure preferential treatment for the educational institution Kake Gakuen, run by his friend Kotaro Kake, to set up a veterinary school.

He has also repeatedly denied that he or his wife intervened in a heavily discounted sale of state-owned land to another school operator, Moritomo Gakuen, which has ties to his wife.