Japan's prime minister met Wednesday with people forced from their homes by devastating rains that have killed at least 179 people, as the government said it would review its disaster management plans.

Prime Minister Shinzo Abe, who cancelled a foreign trip planned for this week as the disaster worsened, met some of the thousands of people still in shelters during a trip to the flood-ravaged Okayama area. 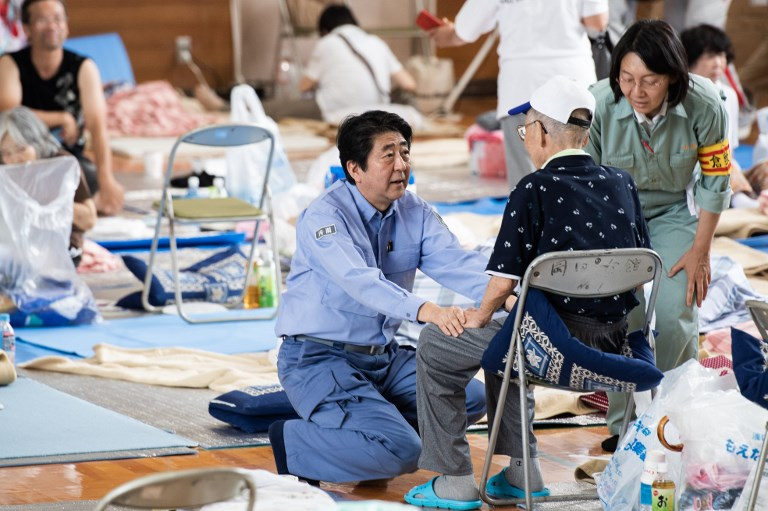 Japan's Prime Minister Shinzo Abe (C) visits a shelter for people affected by the recent flooding in Mabi, Okayama prefecture on July 11, 2018. The toll in record rains that have devastated parts of Japan has risen to 179, the government's top spokesman said on July 11.(Photo: AFP)

He made no public comments, speaking briefly and privately with individuals, including an elderly lady who bowed slightly as the prime minister approached.

Dozens of people are still missing and the toll from the worst weather-related disaster in Japan in over three decades is expected to rise further.

With questions mounting about why the rains were so deadly, top government spokesman Yoshihide Suga said disaster management policies would be reexamined.

"In recent years we have seen damage from heavy rains that is much worse than in previous years," he said.

"We have to review what the government can do to reduce the risks."

Rescue efforts are beginning to wind down, nearly a week after the rains began, and hopes that new survivors could be found have faded.

Over 10,000 people are still in shelters across large parts of central and western Japan, local media said, including at a school in the town of Kurashiki in Okayama prefecture.

Around 300 people spent the night at the Okada Elementary School, many of them sleeping on blue mats laid out in the school's gym.

Hiroko Fukuda, 40, was there was with her husband, but they had sent her young daughter to stay with relatives after she became so distressed by the evacuation that she stopped eating.

The family fled their home on Friday night, and returned Monday to discover the entire ground floor had been submerged beneath floodwaters that ruined everything from electronics to photos.

"We can accept losing things like home appliances, but memories," she said, her voice trailing off.

"We can't get back photos of her at three years old," she said of her daughter.

"It hurts that our memories are gone."

Among the things ruined by the flooding were Fukuda's kimonos, including a "furisode" worn on special occasions.

"I had wanted my daughter to wear it," Fukuda said, her eyes filling with tears.

The days of record rainfall transformed roads into rivers, and waves of mud swept down hillsides, carrying cars and trees with them.

In Kurashiki, the receding floods have left a layer of silt on everything that was underwater.

Crushed cars and fallen trees moved by work crews to either side of one main street formed piles of debris lining the road.

And despite the let-up in the rains, new flood warnings were still being issued on Wednesday.

The town of Fukuyama in Hiroshima prefecture issued an evacuation order over fears that a small lake could burst its banks.

A similar order was issued Tuesday in the town of Fuchu, also in Hiroshima, after driftwood backed up in a river, causing water to crest over its banks and submerge surrounding neighbourhoods.

Authorities downgraded the order on Wednesday but warned that some risk of flooding remained.

Government officials have also warned about the possibility of fresh landslides, with the torrential rain loosening earth on hillsides around residential areas.

And with the end of the rains, searing heat brought new risks, as blazing sun and temperatures up to 35 Celsius (95 Fahrenheit) posed challenges for people living in modestly equipped shelters or damaged homes with no electricity or running water.

"Today thunderstorms are expected in parts of the country, and even if it doesn't rain, there is a risk of landslides," said top government spokesman Yoshihide Suga.

"Sunny and hot days are expected, and we urge people who have evacuated and those working on repairs to be careful to avoid heatstroke."