WORLD Japan prepares for state of emergency over virus

Japan prepares for state of emergency over virus 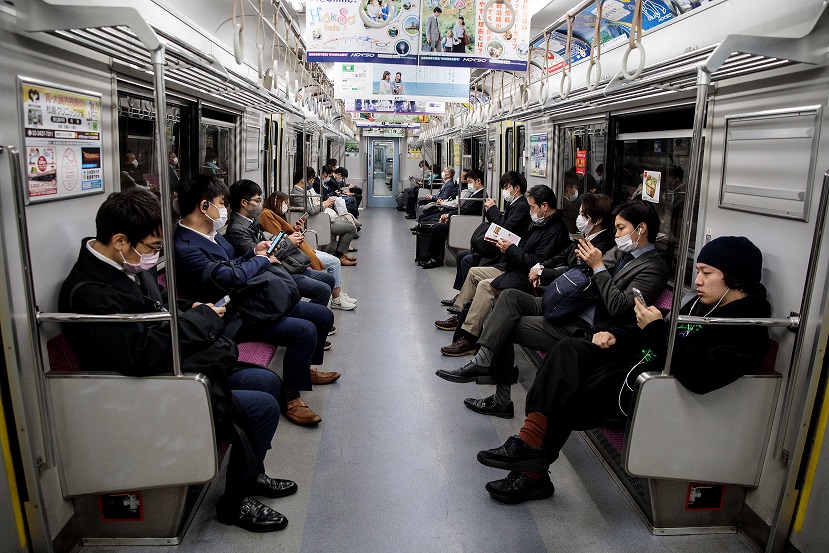 Photo: People wearing face masks amid concerns over the spread of the COVID-19 coronavirus, commute on a train in Tokyo on April 6, 2020.  /AFP

Japan's government began preparing Monday for the declaration of a state of emergency over the outbreak of the new coronavirus, as infections spike in the capital Tokyo and elsewhere.

Prime Minister Shinzo Abe was expected to meet late Monday with a panel of experts advising the government on the global pandemic, with widespread reports that he would announce a state of emergency as soon as Tuesday.

The move comes as infections grow steadily -- though in far smaller numbers than in Europe or the United States.

Tokyo announced a record 148 new cases on Sunday, and pressure has increased on the government to take fresh action.

Tokyo's Governor Yuriko Koike has already urged residents of the capital to avoid non-essential outings on weekends and to work from home during the week.

"We've not received anything formal but we are preparing various things assuming Tokyo will be designated," she told reporters Monday, when asked about a possible declaration.

Koike is expected to outline how the declaration would affect the capital at a press conference later Monday.

The declaration will reportedly only cover parts of the country where infections are increasing rapidly, and falls far short of the strict lockdown measures seen elsewhere in the world.

It will allow governors of areas affected to ask, but not order, residents to stay home, and call on businesses that attract crowds to shut their doors.

It allows the commandeering of land and buildings for medical purposes.

But there is no legal power to enforce requests for people to stay inside, and no punishments mandated for those who fail to do so.

Public transport will continue to run, though reports Monday said Tokyo might ask train operators to reduce services by up to 50 percent, and supermarkets, banks and hospitals will remain open.

"Japan is still haunted by the negative legacy of the war and the oppression of its citizens," said Yoshinobu Yamamoto, an emeritus professor of international politics at the University of Tokyo.

But he said if the relatively relaxed measures proved insufficient to curb the spread of the virus, "calls for a stronger power to control people may grow".

"This case could be a touchstone," he said.

Japan has so far been spared the sort of crisis seen in parts of Europe and the United States, with around 3,650 cases across the country -- compared to around 330,000 in the US and around 130,000 in Italy and Spain.

It recorded its first infection in mid-January, and Abe stunned the country by calling for nationwide school closures in February -- far earlier than in many countries.

In recent days Tokyo's streets have been noticeably quieter as residents heeded the request to stay home. Many businesses have already announced voluntary, temporary closures.