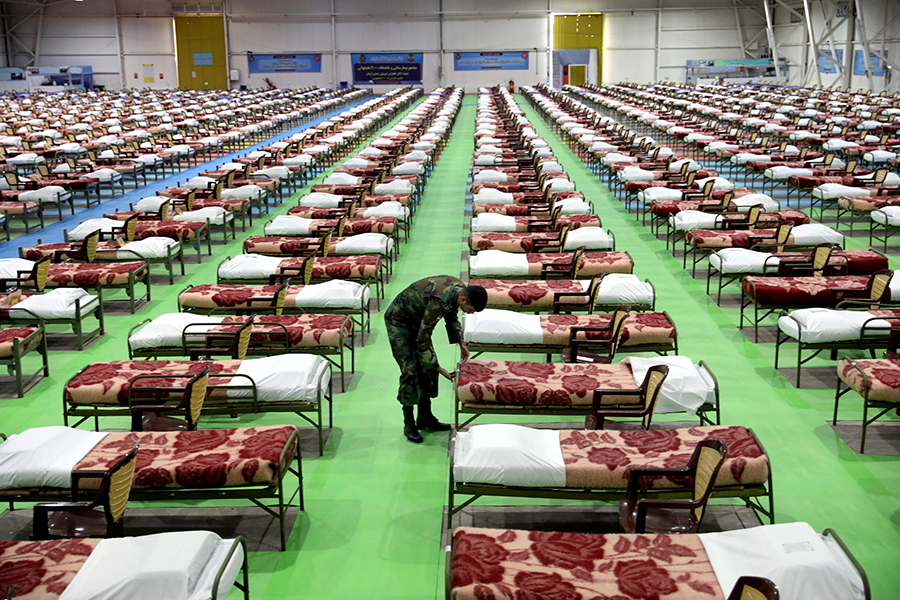 An Iranian soldier works at a temporary hospital in Teheran on Thursday. The Iranian Army set up the 2,000-bed facility for coronavirus patients in the capital. (Photo: Agencies)

Japan's government will soon kick off work on a stimulus package that could be worth 10 percent of the country's economic output, joining global efforts to combat the hit to economies from the coronavirus pandemic.

With the state budget for the next fiscal year having been passed by the parliament on Friday, Japanese Prime Minister Shinzo Abe will order his Cabinet in the coming days to ready the stimulus package for delivery in April, government officials and ruling party lawmakers said.

The package, which will include measures such as cash payouts to households and non-direct spending measures like credit lines and loan guarantees, may top $515 billion, said the officials, who declined to be named as the plan has not been finalized.

That would exceed the amount Japan spent to battle the 2008-09 financial crisis, as a decision to postpone the Tokyo Olympics Games－that had been scheduled for July－threatens to push a fragile economy into recession.

In neighboring South Korea, authorities on Friday pleaded with residents to stay indoors and avoid large gatherings as cases of fresh infections nudged 100 a day over recent days. Among them are many workers at a US military base in the country.

In Iran, the military has set up a 2,000-bed hospital in an exhibition center in the capital Teheran to shore up the healthcare system as it battles the worst coronavirus outbreak in the Middle East, state TV reported on Friday.

It said the new facility was set up in just 48 hours. It will be used for patients who are recovering from COVID-19.

Iran has reported more than 2,200 deaths among nearly 30,000 confirmed cases.

In Iraq, a new PCR (polymerase chain reaction) laboratory built by the Chinese team of experts has been inaugurated in Baghdad. The new lab will increase the country's testing capacity to contain the virus.

Based on the Chinese donation of 50,000 nucleic acid test kits and other equipment, the lab has the ability to conduct nearly 1,000 tests per day to detect coronavirus cases.

In the Philippines, the US military has canceled a large exercise involving thousands of troops because of the pandemic.

The Balikatan 2020 war games, scheduled for May 4-15, would have involved more than 10,000 troops from the two allies and a smaller contingent from Australia, according to the hosts.

India's central bank slashed interest rates in an emergency move on Friday to counter the economic fallout from the pandemic after the federal government locked down the country in order to slow the spread of infections across the region.

India has so far registered 694 cases in its 1.3-billion strong population but experts believe the numbers could rise exponentially in the weeks ahead, Reuters reported.

At a video conference of health officials and experts from China and more than 10 countries in West Asia and North Africa on Thursday, experts said China's experience in fighting the virus presents a great role model to those Arab countries that are struggling with rising caseloads.

Mazen Qusaibati, the head of the internal diseases department at the Ibn Al-Nafees Hospital in Syria, said the meeting helped the country "save time" and "avoid mistakes" in dealing with the virus.

"I am sure that the Chinese experience answers our questions. I think at the meeting was extremely helpful, particularly in that we are listening to the questions from other Arab countries which share the same questions about the pandemic," he said.

In West Africa, it has emerged that a number of countries are drawing on the lessons learned after the Ebola virus swept through the region in 2014. The community health systems that have since been built up are helping in the battle against the virus.

According to the World Health Organization, community workers in countries like Senegal, Sierra Leone and the Democratic Republic of the Congo who were trained to check for Ebola symptoms among people in remote areas have come in handy in responding to the COVID-19 outbreak. They are also providing health information.

Agencies, Otiato Opali in Nairobi, Kenya, and Xinhua contributed to this story.