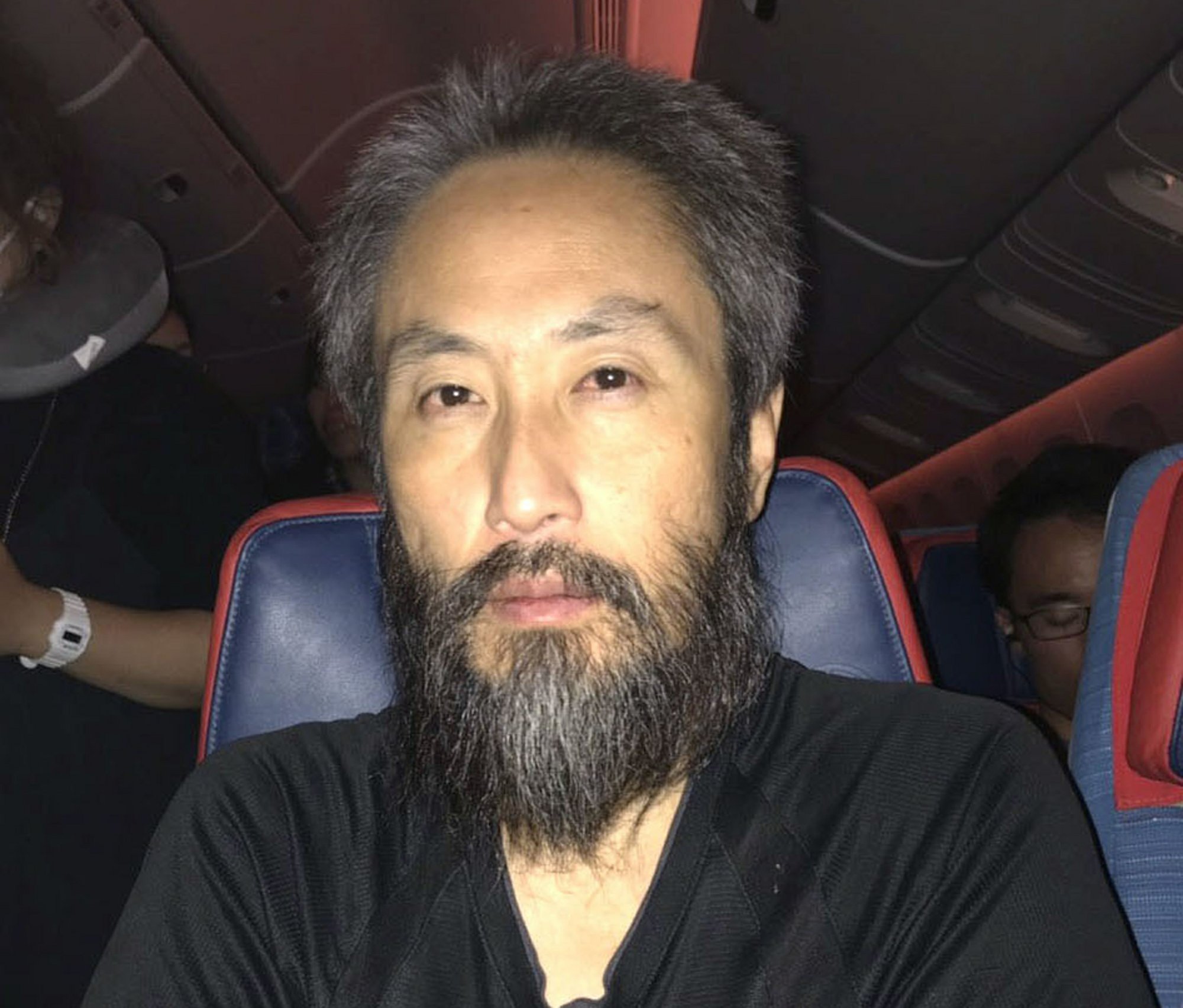 Japanese journalist Jumpei Yasuda is interviewed in a flight from Turkey to Japan Oct. 25, 2018. Yasuda returned to Tokyo on Thursday after being freed from more than three years of captivity in Syria. (Photo: Kyodo News via AP)

A Japanese journalist returned to Tokyo on Thursday after being freed from more than three years of captivity in Syria, and was greeted at the airport with hugs from his wife and his favorite handmade rice balls from his mother.

Jumpei Yasuda was released in Syria on Tuesday and taken to neighboring Turkey.

Yasuda, wearing a black T-shirt, was escorted from his plane at Tokyo’s airport by Japanese officials and ushered into a black van. He left without talking to a large group of reporters who had waited for his arrival.

He briefly met his wife and parents and enjoyed his mother’s handmade rice balls — his first meal after returning to Japan.

In a short message released by his wife Myu, Yasuda said he was grateful that he could return home safely and promised to explain his experiences at a later date.

On an earlier flight from the southern Turkish town of Antakya to Istanbul, Yasuda said he was happy to be going home after living in “hell” for more than three years, but was worried about how he would catch up with a changed world.

“I’m so happy to be free,” he told Japan’s NHK television on a flight from Antakya in southern Turkey to Istanbul. “But I’m a bit worried about what will happen to me or what I should do from now on.”

Yasuda, 44, who was kidnapped in 2015 by al-Qaida’s branch in Syria, said he felt as if he’d fallen behind the rest of the world.

He described his 40 months in captivity as “hell” both physically and mentally. He said he was kept in a tiny cell and tortured. There was a time when he was not allowed to bathe for eight months, he said.

“Day after day, I thought ‘Oh I can’t go home again,’ and the thought took over my head and gradually made it difficult for me to control myself,” he said.

Yasuda was kidnapped by a group known at the time as Nusra Front. A war monitoring group said he was most recently held by a Syrian commander with the Turkistan Islamic Party, which mostly comprises Chinese jihadis in Syria.

Yasuda said he believes he was moved several times during his captivity but stayed in Syria’s northwestern province of Idlib, where he sometimes heard distant firebombing.

“I was living in endless fear that I may never get out of it or could even be killed,” Yasuda told another Japanese broadcaster, TBS. He said he gradually became pessimistic about his fate because his captors kept breaking their promises to release him.

His release Tuesday came suddenly when his captors drove him to the border with Turkey and dropped him off and handed him over to Turkish authorities, he said.

Japanese officials say Qatar and Turkey helped in the efforts for Yasuda’s release, though their exact roles were not clear.

While the public generally welcomed Yasuda’s safe return, some criticized him as a troublemaker in a country where those who act independently are often considered selfish and receive little sympathy when they fail. Some tweets demanded that Yasuda apologize for causing trouble for the government. Past hostages who returned have faced similar criticism.

Yasuda, a respected journalist who began his career at a local newspaper, started reporting on the Middle East in the early 2000s and went to Afghanistan and Iraq. He was taken hostage in Iraq in 2004 with three other Japanese, but was freed after Islamic clerics negotiated his release.

He worked as a cook in Iraq for nearly a year as part of his research for a 2010 book about laborers in war zones. He also wrote articles about his 2004 captivity.

But this time, his captors took away all his reporting equipment including his camera, depriving him of any tangible records.

“I was robbed of all my luggage, and that made me so angry,” Yasuda said. “I couldn’t do any of my work for 40 months.”

His last work in Syria involved reporting on his friend Kenji Goto, a Japanese journalist who was taken hostage and killed by the Islamic State group.

Syria has been one of the most dangerous places for journalists since the conflict there began in March 2011, with dozens killed or kidnapped.

Several journalists are still missing in Syria and their fates are unknown.