TOKYO, April 5 (Xinhua) -- Japan's health ministry and local governments said Sunday the number of COVID-19 infections nationwide had risen to 3,506 cases as of 10:30 a.m. local time here, an increase of 367 cases from a day earlier. 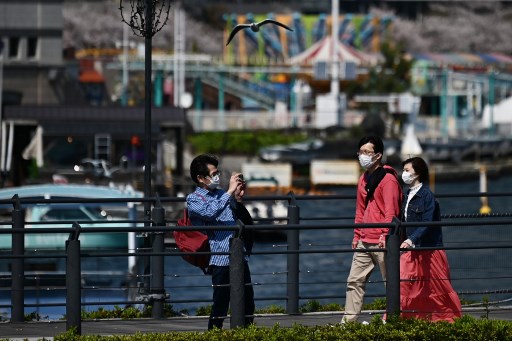 The death toll in Japan from the pneumonia-causing virus currently stands at a total of 96 people, according to the health ministry, with the figure including those from the virus-hit Diamond Princess cruise ship that was quarantined in Yokohama, close to Tokyo.

Of the 3,506 confirmed COVID-19 infections in Japan, Tokyo has confirmed 891 cases. The capital reported 118 new cases on Saturday, the first time the daily increase has topped 100.

The health ministry also said there are currently a total of 73 patients considered severely ill and are on ventilators to receive respiratory assistance or have been admitted to intensive care units for medical treatment.

The ministry added that in total, 1,133 people have been discharged from hospitals after their symptoms improved, according to the latest figures.

For the second straight weekend, many people in Japan refrained from going out after the country's National Governors' Association called on residents to stay at their homes except for essential reasons. The number of temporarily closed stores and restaurants increased from the previous weekend.