TOKYO, Nov. 19 (Xinhua) -- Japan reported 2,208 new daily COVID-19 cases on Thursday, renewing a record number of daily infections for a second consecutive day, according to the latest figures from the health ministry and local authorities. 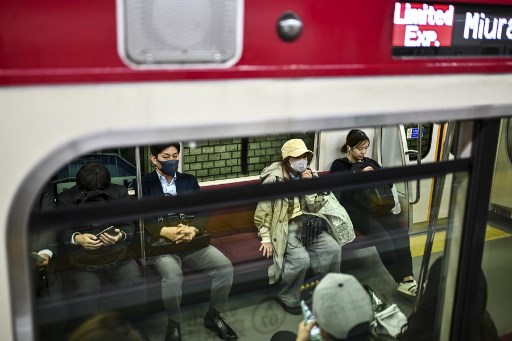 People wearing facemasks as a preventive measure against the Covid-19 coronavirus, commute late evening in Tokyo on November 17, 2020. (Photo: AFP)

On Wednesday, the country logged 2,189 new cases, exceeding the 2,000-mark for the first time, much higher than the previous record of 1,737 last Saturday.

The latest rise in cases brought the nation's total cases to 125,752, not including those connected to the Diamond Princess cruise ship that was quarantined near Tokyo earlier in the year.

In the capital of Tokyo, the epicenter of the country's outbreak, 534 new COVID-19 cases were reported on Thursday, exceeding the 500-mark for the first time, bringing the cumulative total to 36,256, the highest among the country's 47 prefectures.

As the number of new confirmed cases has continued to rise, the Tokyo metropolitan government decided to raise its virus alert by one notch to the highest level, meaning "infections are spreading."

The four-level virus warning system was introduced on July 2. The highest level was last in place on Sept. 10, when it was lowered to the second-highest level which means "caution is necessary" against a resurgence of infections.

The decision to raise the virus alert was made after consultations to assess the exact virus situation in the capital of 14 million with public health and infectious disease experts.

However, Tokyo's alert system only reflects the latest infection situation and has no binding force. The metropolitan government did not request restaurant owners to shorten opening hours as what it did in the summer when infections surged in nightlife districts.

"We are in a phase where infection is spreading rapidly," said Tokyo Governor Yuriko Koike. "The number of new cases among elderly people, in particular, is increasing and we need to address risks for the elderly."

She also said on Wednesday night that the government will take measures to contain the spread of the coronavirus "with the view that daily infections could reach as much as 1,000".

Across the country, the death toll from the pneumonia-causing virus currently stands at 1,959, with 12 new fatalities announced Thursday. The death toll includes 13 from the Diamond Princess cruise ship.

The health ministry also said there are currently 276 patients considered severely ill with ventilators or in intensive care units.

Earlier Thursday, Japanese Prime Minister Yoshihide Suga said the country is now on "maximum alert," urging people to do all they can to prevent infections.

According to the Japanese leader, he has instructed Yasutoshi Nishimura, the minister in charge of the government's coronavirus response, and health minister Norihisa Tamura to take additional measures to contain the spread of the coronavirus.

Some medical experts have described the recent spikes in Japan as a third wave of infections, saying one of the major causes is that more people tend to stay indoors without enough ventilation as temperature drops with winter approaching.