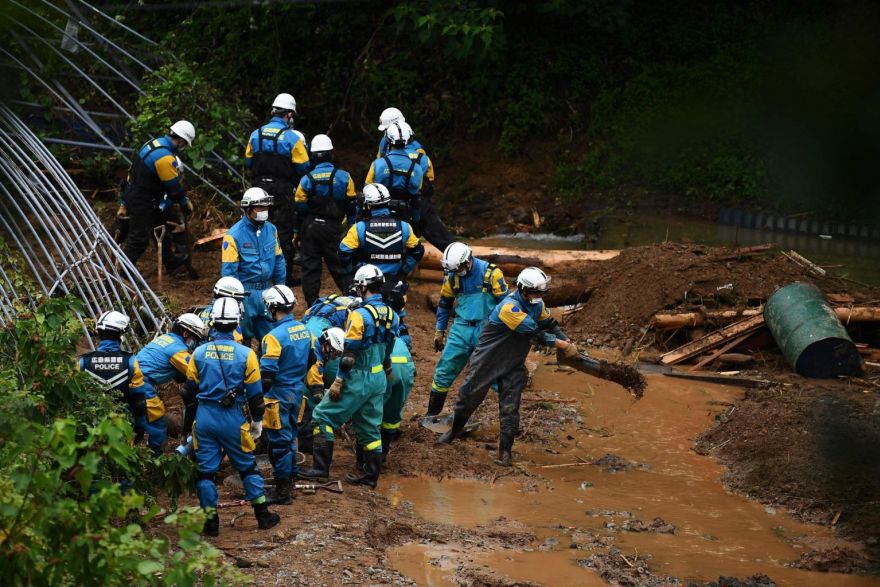 Japanese emergency services and troops were scrambling on Thursday to reach thousands of homes cut off by devastating flooding and landslides that have killed dozens and caused widespread damage.

Japan's Fire and Disaster Management Agency said Thursday more than 3,000 households were isolated, either by rising floodwater or roads destroyed by landslides, mostly in the hardest-hit southwestern region of Kumamoto where fresh downpours were forecast.

The rain front started in the southwest in the early hours of Saturday and has since cut a swathe of destruction across Japan, dumping record amounts of rain and causing swollen rivers to break their banks.

Japan's Meteorological Agency (JMA) said "heavy rain will likely continue at least until July 12 in a wide area" of the country, calling for "extreme vigilance" on landslide risks and flooding in low-lying areas.

The JMA issued its second-highest evacuation order to more than 450,000 people. However, such orders are not compulsory and most residents are choosing not to go to shelters, possibly due to coronavirus fears.

An official in Kumamoto said 55 people from the region were confirmed to have perished with four others feared dead.

Two other deaths have been confirmed on Japan's southwestern island of Kyushu and more than a dozen people are missing or unaccounted for, authorities said.

After five days blocked by floodwater and landslides, troops finally managed to rescue some 40 residents in the village of Ashikita in the Kumamoto region.

Kinuyo Nakamura, 68, burst into tears of relief as she finally made it to an evacuation centre.

"Gosh, it was scary. My house, it's such a mess, I cannot live there anymore," she said as she came across someone she knew at the shelter.

"We have experienced flooding disasters in the past many times. But this one doesn't compare. Rather than being afraid, I was just focused on escaping," she told public broadcaster NHK.

Nakamura choked up as she explained that one of her neighbours had fallen victim to the floods.

"A truly, truly, fantastic person," she said, covering her face to hide the tears. "That was the hardest thing."

In many areas, landslides reduced houses to rubble and floodwater rushed into homes in low-lying areas, destroying the contents and rendering them uninhabitable.

Japan has deployed at least 80,000 rescue workers to save lives with the aid of another 10,000 troops.

The rains also lashed central Japan, with local official Ryoichi Miyamae telling AFP that nearly 4,000 people were cut off, mainly trapped in the cities of Gero and the tourist magnet of Takayama by the overflowing Hida River.

Complicating the rescue efforts has been the coronavirus pandemic, which has claimed nearly 1,000 lives in Japan from more than 20,000 cases.

The need to maintain social distancing has reduced capacity at shelters and many have preferred to take refuge in their vehicles for fear of becoming infected.

One emergency worker said the coronavirus might be dissuading people from volunteering to help with the rescue efforts.

"In past disasters, by the fourth day, we would normally see relief efforts like people preparing meals. This time, I am yet to see anything like that."

Regional authorities have asked potential volunteers from outside Kumamoto not to travel to the region, for fear of spreading the virus.

Japan is in the middle of its annual rainy season and often sees damaging floods and landslides during this period that lasts several weeks.

However, experts say climate change is intensifying the phenomenon because a warmer atmosphere holds more water to dump in the form of rain.