WORLD Japan's Abe cautious about declaring state of emergency over pandemic, says nation is 'on the brink'

Japan's Abe cautious about declaring state of emergency over pandemic, says nation is 'on the brink' 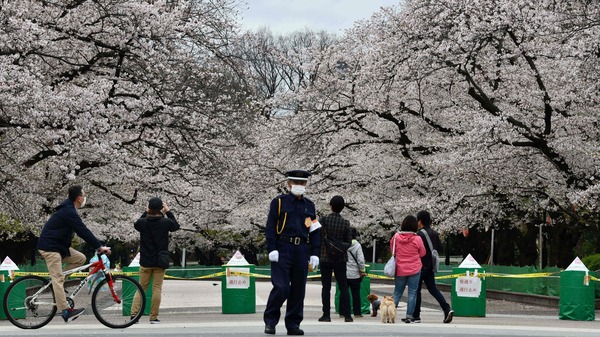 TOKYO, April 2 (Xinhua) -- Japanese Prime Minister Shinzo Abe on Thursday said that COVID-19 infections across Japan are not at a point necessitating a declaration of a state of emergency, although stated the nation is "on the brink".

"At this point, we have not seen infections spreading rapidly and widely across the country. We are just about holding the line," Abe said in parliament.

"But if we lower our guard now even a little, infections could accelerate suddenly at any moment. We continue to be on the brink," Abe added.

The prime minister's remarks in parliament Thursday came as Japan's health ministry and local governments said that 2,713 people had been infected with the COVID-19 virus in Japan as of 8:30 p.m. local time on Thursday, with the daily number of cases topping 200 for a third straight day and a total of 82 people losing their lives to the pneumonia-carrying virus.

Nationwide, 218 new infections were reported as of Thursday evening, while in Tokyo, the epicenter of the virus in Japan, a record 97 people have been infected, the latest figures showed.

The number has surged from previous records this week in Tokyo, far surpassing 66 cases reported on Wednesday and 78 on Tuesday, further fueling possible calls by the metropolitan government to request additional measures to curb the spread, such as more stringent stay at home orders, social distancing and the continued request for people to work from home and refrain from going outside in the evenings.

Abe has taken a cautious approach to declaring a state of emergency as doing so could infringe on the rights of people, although the prime minister has acknowledged that, "It's critically important to prevent a sharp rise in cases in the Tokyo metropolitan area with a large population, which is at the center of economic activity."

Prior to a state of emergency being declared over the virus, the prime minister will have to seek the opinions from an advisory panel comprised of medical experts and the level of emergency will have to meet specific criteria.

If a state of emergency were to be declared by Abe henceforth, the government would have extended powers to instruct people to stay at home on a regional or national basis, issue closures to schools, and restrict the use of locations that facilitate large groups of people gathering together or cancel large scale events all together.

The government would also have the authority to demand that supplies deemed essential to combating the spread of the virus be sold to them or requisitioned, and be able to temporarily commandeer private land or facilities for the purposes of providing medical care.

Adding to pressure on the government to step up its preventive measures, a panel of government experts warned a day earlier the country's health care system could collapse if coronavirus cases here continue to spike.

The health care system in Tokyo and four other prefectures is under increased strain and "drastic countermeasures need to be taken as quickly as possible," the experts concluded.

In response, Abe told parliament Thursday that ensuring hospitals can provide the necessary care to coronavirus patients, even should the situation worsen measurably, would be paramount.

"It's our urgent task to make sure hospitals can provide medical care to patients with severe symptoms even when the number of cases spikes," said Abe.

As Japan's coronavirus situation escalates, the government is rushing to compile an extra budget for fiscal 2020 starting from April in a bid to tackle the crisis, with one of the priorities being on securing funding to fortify the healthcare system here against "an explosive surge in patients," Abe said.

The extra budget compilation is an extremely rare case at the beginning of a new fiscal year and the government plans to roll out a stimulus package next week, which Abe himself has described as the government's "boldest-ever".