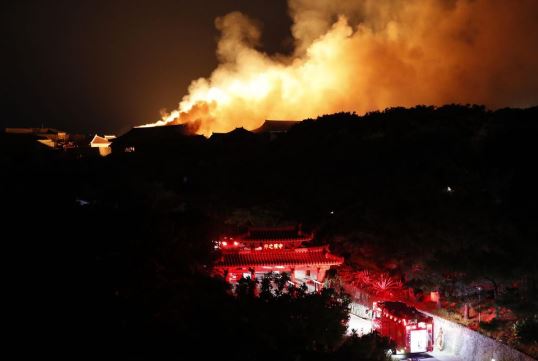 The main building of the Shuri Castle is seen on fire in Okinawa prefecture, southern Japan, Oct. 31, 2019. (Photo: Xinhua)

TOKYO, Nov. 6 (Xinhua) -- Japanese Prime Minster Shinzo Abe pledged Wednesday to make all out efforts to secure the funding and other resources necessary to rebuild an iconic castle in Okinawa that was gutted in a blaze last week.

Speaking to relevant ministers in a meeting Wednesday and describing Shuri Castle as "the pride of Okinawa," Abe said that reconstructing the buildings as quickly as possible is paramount.

"The government intends to do all it can including securing necessary funds to reconstruct the castle buildings as quickly as possible," the Japanese leader said.

"We will also listen to the opinions of Okinawa Prefecture and its people," Abe added.

The previous day, local police and fire authorities said the blaze that engulfed the main structures at the UNESCO World Heritage site in Naha city, was likely caused by a faulty electric distribution board.

The main structures of Shuri Castle burned down in the predawn fire, which began on the northern side of the castle's main hall shortly before 2:40 a.m. local time on Oct. 31.

The local police and fire department said it took more than 10 fire engines to address the blaze, which also engulfed other affiliate buildings and wasn't suppressed until hours later, under control.

Investigations into the incident have since found through security footage taken from the main hall, that a flash of light occurred just prior to the fire starting.

Sources close to the matter suggested the flash was likely the beginning of the fire and added that the seven cameras set up to record in the main hall were all almost instantly knocked out in the subsequent inferno.

A charred electrical distribution board was found by investigators in the days after the blaze, which they believe short circuited and started the rampant fire which devoured seven wooden buildings occupying a total of 4,800 square meters and took until 1:30 p.m. local time the following day to fully extinguish.

Investigators are now focusing their attention on the area close to where the circuit board was located, as well as on the actual potentially faulty electrical device itself, for further evidence.

On Wednesday, Internal Affairs Minister Sanae Takaichi briefed other ministers on the extent of the damage at a meeting held at Abe's office, and Land and Transport Minister Kazuyoshi Akaba explained how the castle had been restored once before after it was destroyed in World War II.

In addition to the main hall, the Hokuden north hall and Nanden south hall were completely destroyed. The three halls were not equipped with sprinklers as their installation was not mandatory, according to the local fire department.

The castle, listed as Japan's 11th World Heritage site in December 2000, serves as a symbol of the Ryukyu Kingdom that ruled most of the Ryukyu Islands during the 15th-19th century, with kings during the era unifying Okinawa.

The castle was originally built around 500 years ago and designated a national treasure in 1933.

The castle was rebuilt after previously being burnt to the ground during World War II and its main hall also underwent restoration in 1992.