TOKYO, June 24 (Xinhua) -- An aging nuclear reactor in Fukui Prefecture on the Sea of Japan coast was controversially brought back online this week marking the first reactor to be operational beyond the government's mandated 40-year limit, put in place after the 2011 Fukushima nuclear crisis, local media reported Thursday. 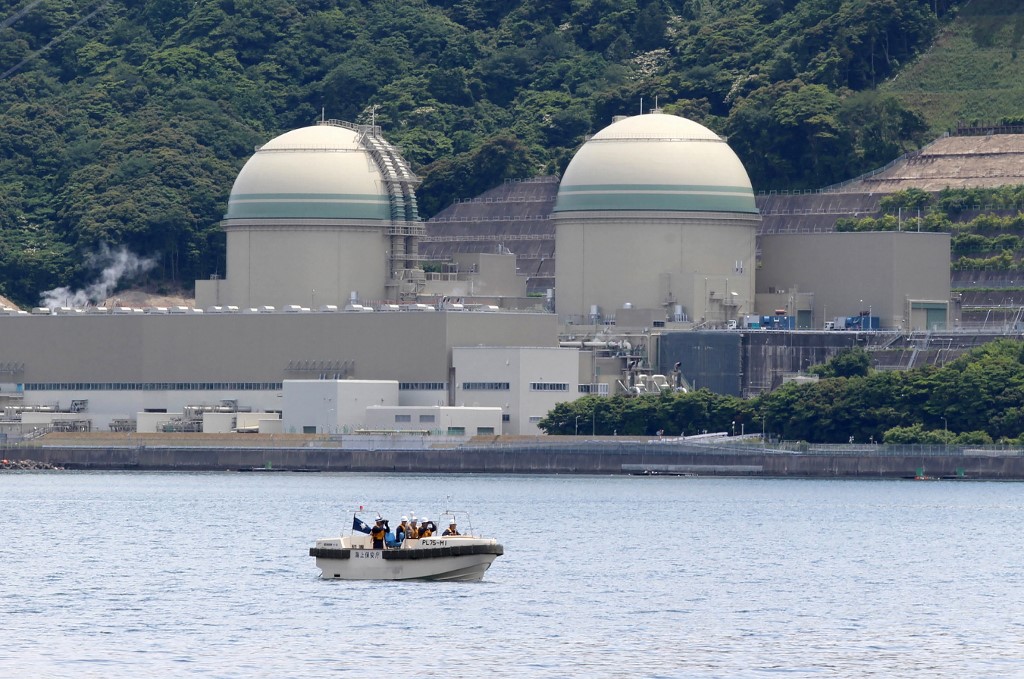 A boat of the Japan Coast Guard patrols in front of the No. 3 reactor (L) at the Takahama nuclear plant in Takahama, Fukui prefecture, some 350 kilometres (215 miles) west of Tokyo on June 6, 2017. Kansai Electric Power (KEPCO) switched on the nuclear reactor on June 6 in a small victory for the government's pro-atomic push, despite strong public opposition after the 2011 Fukushima meltdown. (Photo: AFP)

Kansai Electric Power Co., the operator of the controversial No. 3 nuclear reactor at the Mihama plant, said the unit was put back into operation on Wednesday after being offline for about 10 years.

During this time the reactor, which was first put into operation 44 years ago, underwent safety work and inspections, the plant's operator said.

As was the case with all of Japan's active nuclear reactions, the unit was taken offline in the wake of the devastating earthquake-triggered tsunami which sparked the world's worst nuclear disaster at the Fukushima plant in March, 2011 since the Chernobyl disaster in April, 1986.

According to the plant's operators, once the aged reactor, the first to be brought back online among Japan's units aged 40 years old after the Fukushima disaster, its engineers started removing control rods inside the unit.

The government-mandated 40-year limit on nuclear reactors operating was put in place after the 2011 crisis, but if a reactor passes a safety screening by Japan's Nuclear Regulation Authority (NRA), a reactor can have its operational life extended to sixty years.

Such approval was granted for the Mihama No. 3 unit by the NRA in 2016, much to the consternation of the local community, Japan's closest neighbors and the broader international community.

The concerns come as the Fukushima crisis has yet to be brought under control, with the Daiichi plant facing a shortage of space to store contaminated water.

The plant's operator, Tokyo Electric Power Co. Holdings, Inc., along with the government is, once again, planning to release radioactive water into the Pacific Ocean, despite protests and ardent opposition from local fisherman and the international community amid environmental concerns.

Such is the opposition to the Mihama plant being restarted amid ongoing safety concerns abut the Fukushima plant and the fact that lessons from the crisis are seemingly yet to be fully learned, local civic groups have protested against the unit's restart.

They held up placards and banners with antinuclear slogans, with some of them containing demands such as "Don't allow the restart of the reactor!"

In Fukui Prefecture and the neighboring prefectures of Kyoto and Shiga, a lawsuit was filed earlier this week with the Osaka District Court, insisting on the suspension of the Mihama No. 3 reactor.

According to the plaintiffs, old reactors like the No. 3 unit at the Mihama plant are more likely to malfunction should a large earthquake occur in the vicinity. They argued that the 40-year operational limit, originally mandated by the government, should be, without exception, adhered to as Japan, the world's most seismically active country, is prone to devastating natural disasters such as earthquakes, tsunamis and volcanoes.