Japan's central gov't, Okinawa agree to hold talks on controversial US base relocation

TOKYO, Nov. 6 (Xinhua) - Japan's central government and Okinawa prefecture agreed Tuesday to hold discussions for around a month on the contentious issues of the relocation of a US military base within Japan's southernmost prefecture of Okinawa. 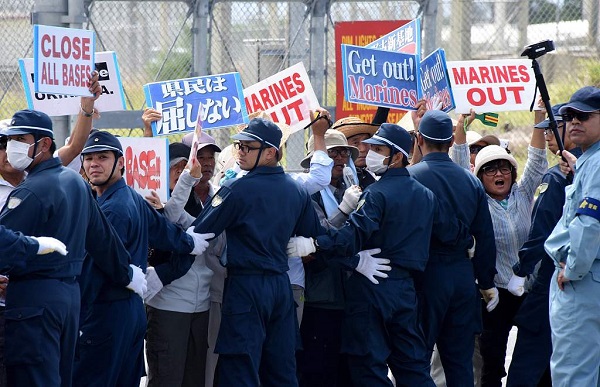 Policemen (in blue) try to remove people protesting against the presence of US bases, in front of the gate of the US Marine Corps' Camp Schwab in Nago on the southern island of Okinawa prefecture on June 17, 2016. (File Photo: VCG)

The talks held in Tokyo between Okinawa Governor Denny Tamaki and Japan's top government spokesperson Chief Cabinet Secretary Yoshihide Suga come at a time of mounting friction between the central government and Okinawa.

Under a 1996 pact between Japan and the United States to relocate the US Marine Corps Air Station Futenma, the central government later decided the base should be moved from the crowded residential district of Ginowan to the less populated coastal area of Henoko in Nago, also on Okinawa island.

Amid growing anti-US sentiment on the tiny subtropical island and following Tamaki being elected as governor in September's gubernatorial election on a platform of opposing the base's relocation and lessening Okinawa's base-hosting burdens, Tamaki has been seeking to resolve the issue through dialogue with the central government.